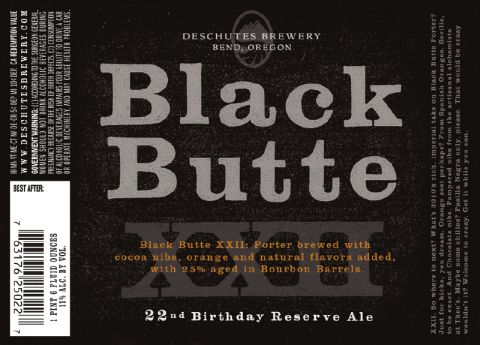 Yesterday, on Deschutes’ 22nd anniversary, we learned that Deschutes was not going to sell bottles of this year’s Black Butte XXII and that kegs of the beer would be limited to the brewery only. After reaching out to Brewmaster Larry Sidor, we gained some insight into the issue. Turns out it is more of an aesthetic issue and in no way is tied to the fear of the beer turning rancid. This makes sense, considering we’ve yet to have a bad beer from the brewery.

We were recently informed that Black Butte XXII Imperial Porter will not be appearing in bottles due to an issue with cocoa butter coagulated and potentially turning rancid.Is this so?

Larry Sidor: No way on the rancid thing!!!! As you are aware Deschutes chooses not to add over processed ingredients or artificial flavors to our beers. Our philosophy is that the closer the ingredient is to the field, the greater the customer experience will be. Well, the chocolate we added to this Double Black Butte Porter didn’t go into solution in a manner that we had perfected over the years. The result was a layer of chocolate at the liquid interface. While the beer tastes fantastic, those consumers that “drink with their eyes” would find the beer objectionable. Thus, we chose to sell the beer only at our pubs where our Bartenders can control the appearance.

We will not be releasing our Reserve Series Black Butte XXII in 2010. This Imperial version of our popular Black Butte Porter has helped to commemorate Deschutes Brewery’s June 27th anniversary since 2008.

The experimental chocolate used in this year’s formulation is coming out of solution and is forming a butter-type layer on the surface of the beer. While the beer tastes perfectly fine, the visual in the bottle is not up to our long-held commitment to quality and positive customer experience.

Pushing boundaries like we do means that things don’t always turn out the way we expect. However, we promise to never back away from the line, even when the risk is great.

There will be very limited amounts of Black Butte XXII on draft, only available at the Bend pub, Portland pub and the Bend tasting room.

So there you have it, straight from Deschutes. Make sure to get down to the Portland and/or Bend pubs and get a snifter of the Black Butte XXII while supplies last!