On Saturday, July 16th, Corvallis’ Flat Tail Brewing celebrates their first anniversary. During this event, the brewery will release their anniversary ale,  a 100% barrel fermented blonde fermented with brett b and c, lacto, and kolsch yeast, re-oaked with spirals. Also on tap will be the Double Kolsch, the Lovin’ Hoppin’ Squeezin’ Hoppy Rye/Vienna/Kolsch yeast Pale, and a 9 month old keg of Lickspigot Barleywine. 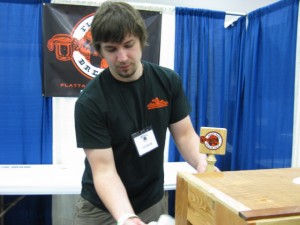 Saturday July 16th, 2011. Happy hour all day, special anniversary ale tapping at 2PM, with a free toast and another free toast at 6PM. Will be tapping two mystery firkins, and a special reserve ale at 2pm as well. Head Brewer Dave Marliave will be on hand from 2-PM for any Flat Tail questions you have, along with our plans for the future, and some shwag giveaway trivia.