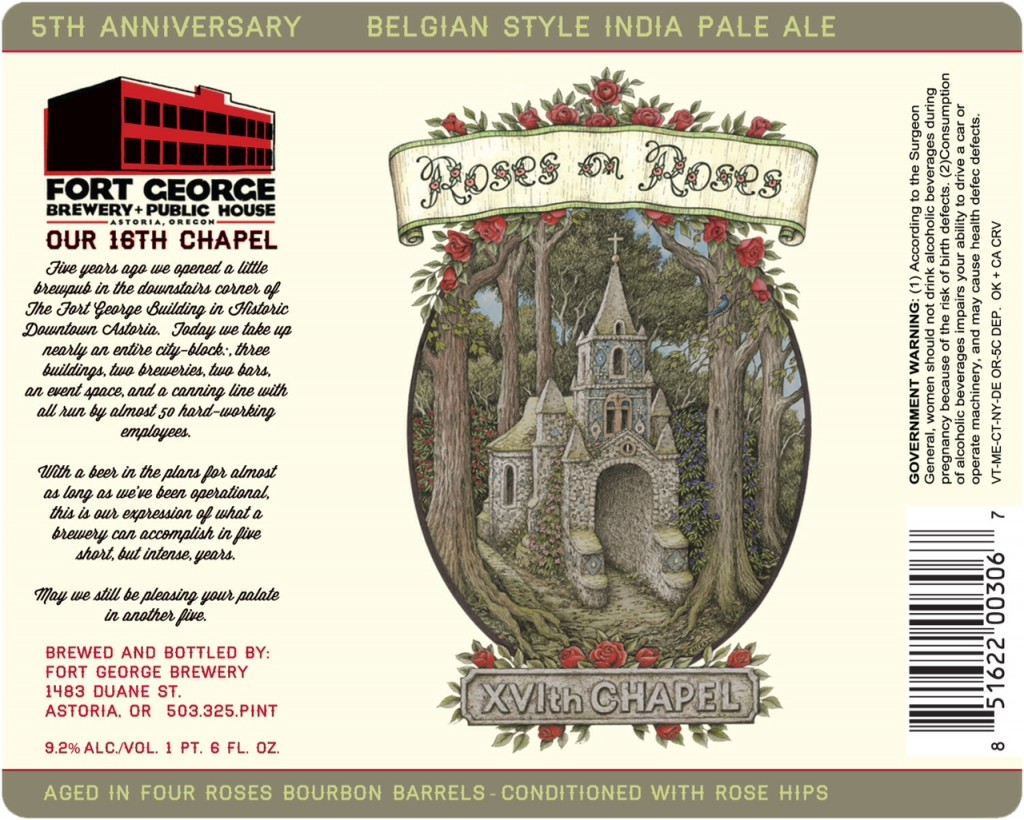 It’s hard to believe that Fort George Brewery and Public House of Astoria, Oregon has been open for five years, but indeed it is true. To celebrate the first half decade, the brewery is releasing limited 22-ounce bottles of their imperial Belgo IPA known as XVIth Chapel. But it’s not just the rare emboldened brew beer geeks may have sampled before, no, this rendition is aged in Four Roses bourbon barrels and conditioned with rose hips. The commercial description reads as follows:

Five years ago we opened a little brewpub in the downstairs corner of The Fort George Building in Historic Downtown Astoria. Today we take up nearly and entire city-block: , three buildings, two breweries, two bars, an event space, and a canning line with all run by almost 50 hard-working employees.

With a beer in the plans for almost as long as we’ve been operational, this is our expression of what a brewery can accomplish in five short but intense years.

May we still be pleasing your palate in another five.

Fort Anniversary party is Sunday March 18, 2012 at their brewery. You can find this beer and other exciting pours on this date. It promises to be one hell of a party! 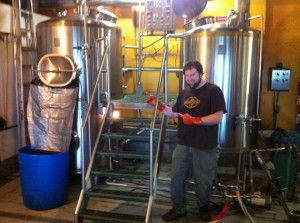 Many industry folks in the Oregon and California craft beer community known Tim Ensign. Ensign spent many years working as the lead Oregon representative for Mountain Peoples Organic Wine and Beer before going out on his own to begin Powered By Yeast, a craft beverage brokerage business. Ensign also serves as the Portland representative for Fort George. To commemorate Powered By Yeast’s first anniversary, Ensign brewed Powered by Hops IPA on the Astoria brewery’s smaller “Sweet Virginia” 8.5-barrel system. “I have been homebrewing for over 16 years with over 100 batches personally” says Ensign, “but this is my first beer brewed on a commercial system.” Ensign say he was assisted by brewmaster Jack Harris and brewer Piper Gladwill.  “We took the reciped for Vortex and lowered the ABV and tweaked it a bit.” he says.

Powered By Hops will be released on Friday March 23, 2012 at Bottles for Powered By Yeast’s first anniversary party. Details on the beer recipe and the event can be found here.

We have been so busy filling up our new 120bbl fermenters, sending beer off to Seattle, and renovating the Fort that we almost forgot. We didn’t forget to make a beer to celebrate though. This Sunday, March 18th, we will be celebrating 5 years of the Fort George Brewery + Public House with an all day party and release of the XVIth Chapel: Roses on Roses in 22oz bottles. These will be available from the Public House and Taproom on Sunday, and shortly thereafter throughout Oregon and Washington.

The party Sunday will also include live music, raffles every hour, a scavenger hunt (first hint will drop on facebook), $1 off pints with Fort George gear, cake and beer. The Taproom will open at noon to accommodate the celebrating kind.

Here is the word from co-owner/brewmaster, Jack Harris:

“Five Years ago we opened a little brewpub in the downstairs corner of The Fort George Building in Historic Downtown Astoria. A small group of us went to work brewing beer, flipping burgers and creating a space for people to meet and enjoy. Today we take up nearly an entire city-block, three buildings, run two breweries, two bars, an event space and canning line with almost 50 hard working employees.

How do you commemorate such a milestone? With beer of course. A beer that has been in the planning for almost as long as we have been in operation. A strong west-coast IPA fermented with a ravenous Belgian yeast strain is allowed to condition in Four Roses Bourbon Barrels until the oak and esters become one. This is blended back into a bright tank, a perfect mixture that entails stringent quality control (aka tasting) until it is just right. The entire elixir sits on ten pounds of fresh rose petals and more hops (of course) until imbued with a subtle floral essence.

While we are totally committed to the quality of canned beer, a special occasion like this affords an opportunity to show off some special packaging. Glass is beautiful and we have created a beautiful beer to put inside it. Rose on Roses is our Bourbon Barrel Aged Belgian Style India Pale Ale. Our expression of what a brewery can accomplish in five short, but intense years. May we still be pleasing your palate in another five.”

Thanks for all of the support.