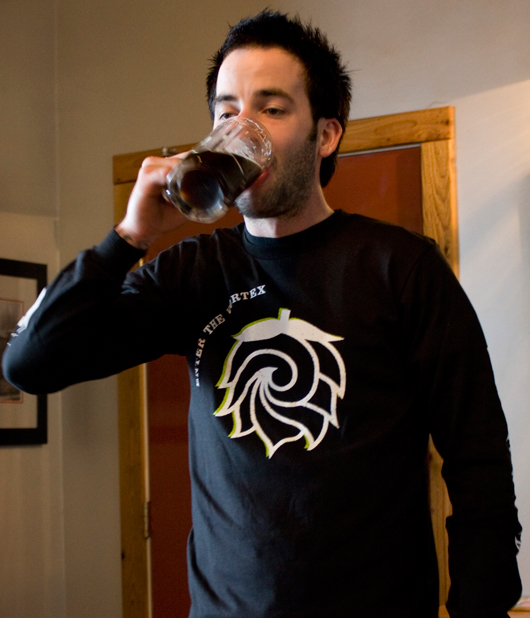 How did this particular collaboration between the two Astoria brewhouses come about?

Vinnie Steele: First off, this is the second collaboration that the Fort George Brewery and Astoria Brewing have done together. The first was a truffle stout brewed on our eight-barrel system by Jack Harris and John Dalgren for the 25th anniversary celebration of the Goonies movie, here in Astoria.  John and I have known each other for sometime now, and have been kicking around the idea to brew a beer together since the Truffle Shuffle was made. A couple months ago me and John were sitting down over a couple pints at the Fort and started discussing what style of beer we would make.

What style of beer is “Batcountry?”

VS: I myself being a huge stout fan, and with John’s fascination for lagering, we decided, “why not try and combine the two?” Weeks later we once again got together at a local tavern with some other friends and got to work designing the recipe. The idea was to make and experimental oatmeal imperial black lager. After a lot of back and fort h, and discussing what characteristics we wanted, we ended up with a complex recipe utilizing eight different malts and three different hop varieties. John and myself brewed the actual beer on Astoria Brewing’s five-barrel system. It sat in the fermenter for about a month while the yeast did its job and also naturally carbonated the beer. What we ended up with was a black as night imperial lager that starts with the crispness of a lager then the smooth malted flavors of a complex stout with everything blending together with a nice bitterness lingering after. With an ABV (alcohol by volume) of 8.4% that backs it all up.

How did you come up with the name “Batcounty?”

VS: As for the name, we never really gave it much thought. The beer was kegged and delivered to our pub still without a name. After having sampled the beer several times during various stages of the fermentation and growing up reading Hunter S. Thompsons Fear & Loathing in Las Vegas, the quote “this is bat country” just popped up in my head. It seemed fitting to describe a beer that started out so chaotic and rebellious but ended up blending together so well that it left you feeling satisfied. Sort of matching what I felt when I first read the book and also, our personalities.

As experimental as Mr. Hunter S. Thompson himself, Backcountry is currently on tap at Fort George as well as the Wet Dog Cafe in Astoria.