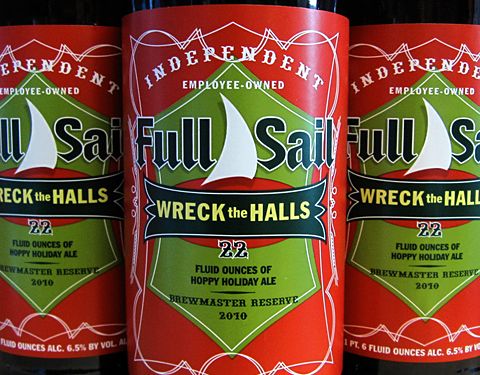 Hood River, Oregon – The first snow storm of the season has arrived! The air is cooler, the nights are longer, and the east winds are blowing as snowboarders and skiers start to make their way up the mountain. At the Brewery, the Full Sail crew is humming with the anticipation of a big snow year and their hoppy holiday release, Wreck the Halls.

Wreck the Halls is a sublime hybrid of an American style IPA with a “Winter Warmer” style strong ale. The result is a bold beer that celebrates the holidays with an intriguing blend of Centennial hops providing elegant citrus notes balanced by a backdrop of a rich caramel malt body. Wreck the Halls is dry hopped further, thereby amplifying the aroma and flavor. A perfect way to celebrate the season, Wreck the Halls will be available in specialty beer stores and pubs on draught and in 22oz bottles early November through December. ABV 6.5%, IBU 68.

“Wreck the Halls is part of our rotating selection of Brewmaster Reserve beers. Every eight to ten weeks we come out with a different beer that showcases the brewer’s art. We began the program back in 1998 as a way of celebrating our independence and creativity,” said Full Sail’s Founder and CEO, Irene Firmat.

According to Executive Brewmaster Jamie Emmerson, Full Sail will reveal their 2011 Brewmaster line up in early December.