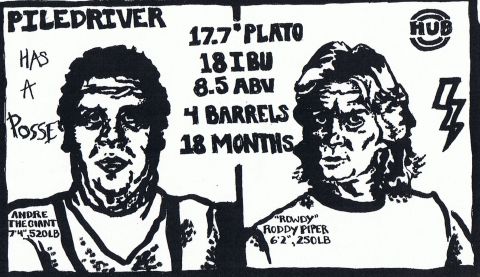 Hopworks Urban Brewery will present a new beer at BikeToBeerFest this Saturday, August 28. Named Piledriver, it’s a Belgian ale, aged in barrels with lots and lots of cherries. It’s a truly unique treat. The beer pours reddish-brown with a bright, near-white, frothy head. Aesthetically, it’s a very pleasing beer, as it looks very appetizing just sitting there in a teardrop glass. A tart cherry aroma explodes when you take that first sniff; it almost overwhelms. Interestingly, there’s almost no bourbon scent at first impression. However, when that first taste hits your tongue, the bourbon is right up front. It’s not harsh or overbearing, but you know it’s there. Very quickly, though, the tart cherry flavor begins to round off and smooth out the bourbon. That tart sweetness, together with a hint of the bourbon, is the distinct impression of the beer, initially.

But, even though the bourbon flavor is very much forward as you first sip the beer, it recedes very quickly, as the beer stays in your mouth and then as the beer warms in the glass. With each sip, the bourbon is less pronounced, while the tart sweetness of the cherries, along with the astringency and slight bitterness of the tannins, become the more prominent flavors. Eventually, the bourbon almost hides in the background, while the blend of different, competing flavors – the bourbon, the tart cherries and the tannins – works in concert to give a very complex and pleasant taste.

A very nice beer that I’m looking forward to seeing on tap at the fest.

The facts on the beer:

Aged for 18 months in 4 different barrels:

– Maryhill Sauvignon with 60# of sour cherries from Fruithill in Yamhill

Andre The Giant vs. Roddy Piper