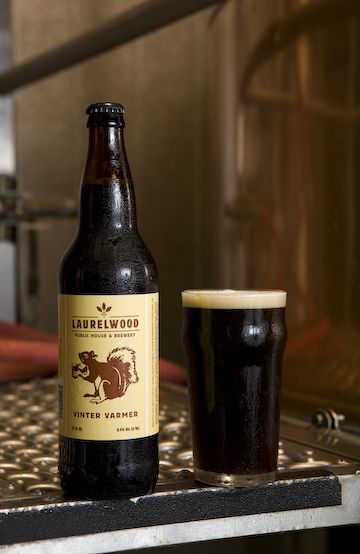 Laurelwood Brewing Company has just announced the release of many interesting beers. Known for their passion for new recipe development and the creation of forward-looking flavors, here’s a glimpse of what to expect on draught and in bottles:

The story of Stingy Jack is legendary in Ireland and is the infamous “Jack-o-the-Lantern.” We’ve paid homage to this less-than-loveable drunkard with a pumpkin ale that’s if not more friendly thank Jack, then at least as renowned. This amber colored brew was created with roasted whole pumpkin, toasted pumpkin seeds and organic pumpkin puree. A touch of spices creates a subtle and delicious brew to chase away the evil spirit of Stingy Jack.

Our second fresh hop beer of the season uses wet Crystal hops from Virgil Gamache Farms near Yakima, WA. These hops display an amazingly fruity character in the fresh form. For this beer, we split about 80 lbs of hops between the mash, whirlpool and hop back, focusing mostly on their aroma potential.

(22-ounce Bottle Release on 11/1)
Vinter Varmer
One of our most popular seasonals, this strong ale is as rich and complex as it is drinkable. A blend of six malts and four hops creates an ale with deep caramel character, spicy hop flavor and a dry, roasty finish. It’s spelled differently because it’s Vonderful!
OG 16 ABV 6.4%  IBU 49

Framboise
Unlike most of the beers we produce meant to be consumed as fresh as possible, our Framboise (label pictured above)  takes nearly two years to produce. This Belgian-style ale starts out like most many beers undergoing a 2 week fermentation process. From there, things go radically different.  The beer was moved to wooden barrels where we added Oregon raspberries and several types of “wild” yeast and bacteria to give create this unique beer. (To be released right around Thanksgiving.)
Tags:Laurelwood, Oregon, Portland, Yakima