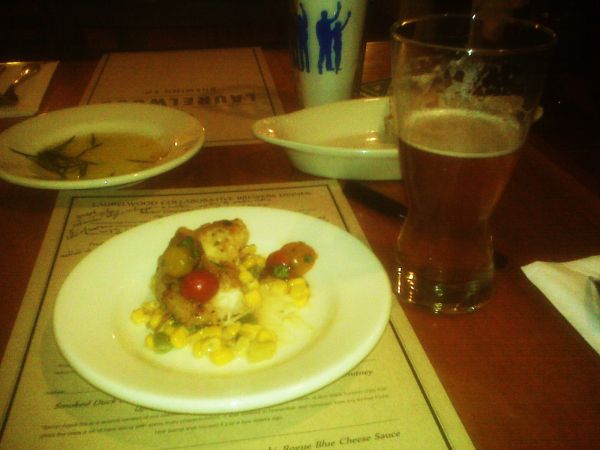 The Laurelwood Collaborative Dinner was a rare treat for fans of dinners where food is paired with complimentary beer.  Most common is the brewer’s dinner that features the host brewery’s beers. Laurelwood’s dinner was a unique occasion because it was an opportunity to attend a dinner that featured not one, not two, not three, but four different breweries.

Last Thursday September 9, Walking Man of Stevenson, Washington,  Everybody’s Brewing, of White Salmon, Washington, and Portland’s own Upright and Laurelwood breweries all provided delicious beers that were paired with eight courses during a four hour feast at Laurelwood’s Northwest Pub on Kearney Street.  Laurelwood’s brewmeister, Chad Kennedy, explained that he was so tired of drinking his own beers, as good  as they might be, that he decided on this unusual approach as a change of pace.  He chose to bring together some of his best friends in the local brewing scene for one special dinner. 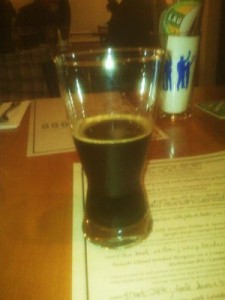 The food was uniformly excellent and the Laurelwood chef deserves kudos.  However, the beers, for this diner, were the main focus.  And the event was greatly enhanced because brewers from all four participants offered comments on and descriptions of their contributions. Each brewery provided two beers, though Laurelwood did pour an unlisted pre-dinner beer, for those who wished to whet their whistle before the first course was offered. Walking Man brought along it’s Flip Flop Pilsner and a Black Cherry Stout, two beers which acted as the opening and closing acts for the production. Jacob Leonard, Walking Man’s head brewer, described the  Flip Flop Pilsner as a bohemian-style pilsner that was typical of Walking Man’s beers: a bigger, bolder, maltier and  more adventurous example of a particular style.   Brewed as a summer seasonal each year, it features all imported German malts and hops.  Loads of Saaz hops and an usual malt character  make for a  beer that is softer and less crisp than most pilsners and this beer was one of the evening’s beer highlights. The Black Cherry Stout capped the evening’s menu of beers, as it was perfectly paired with the desert: a Flourless Chocolate Stout Cake with Chili Spiced Whipping Cream and Cherries.  If all of that sounds delicious, trust me, it was. The Black Cherry Stout, another Walking Man seasonal, is an intensely-flavored stout, with an alluring Black Cherry aroma that draws you deep into a pint glass, like a cat might sink into a bowl of catnip.  Like many well-crafted beers of that sort, the strong cherry aroma soon recedes and then the complex coffee and chocolate flavors become more pronounced, as you get deeper into the glass. Jacob told the story behind the beer’s continued presence in their regular line-up of rotating seasonals.  Apparently, the owner of the Horse Brass Pub, Don Younger, happened to sample the newly-designed and brewed beer at a festival.  Don was so enamored that he told the brewers that he wanted to get it on tap in his bar and he strongly suggested that Walking Man rethink its initial plans to discontinue brewing the beer after that one batch.  They took his advice.  So fans of the Cherry Stout can thank Don Younger for advocating for its continued existence.

Everybody’s Brewing presented their Summer Lovin and their Law of Nature Pale Ale.  The Summer Lovin is a light, Saison-inspired wheat beer with Saaz hops, orange peel and coriander.   This beer was the lightest beer of the evening, and it is clearly designed as an easy-drinking summer beer.  It was pleasant, but after the robust Walking Man pilsner, some of the beer’s more subtle features were less evident. Their Law of Nature Pale Ale was another story.  The owner and brewer, Doug Ellenberger, described it as a light IPA, and it is difficult to view the beer as simply a pale ale, because it does pack so much flavor into such a modest package. In fact, it compares favorably to a couple of regular IPA’s from some of the area’s larger “craft” breweries. Brewed with Clusters and Columbus hops, the brewer aimed to brew a session beer that he would enjoy drinking. Like many of Everybody’s Brewings’ other offerings, this beer very successfully fills its anticipated niche.  After sampling a fair number of their beers over the last couple of weeks, Everybody’s Brewing is fast becoming one of my local favorites. 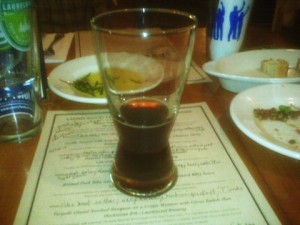 Upright’s two selections were predictably excellent.  Both the Seven – one of their regular beers – and the Barrel-Aged Six – a soured version of their standard rye beer –  had been on tap at their tasting room, so I was familiar with both.
The Seven is an unusual beer that is hard to describe, though delicious to consume. I imagine that it would be most accurately described as a Belgian-style Saison, though the mix of three local malts and four hop varieties makes for an imaginative and creative beer that screams IPA.  What’s great is that while you’re trying to decide exactly how to categorize it, you’ll probably have to stop yourself from continuing to drink it, as the hops and spiciness and a little bit of tartness, make for a truly addictive beer.  If I see this beer on a menu, I usually have to convince myself to get out of my rut and order something different.  Upright’s Seven is one of my “default”  beers, a beer I’m very much inclined to choose, anytime, anywhere.

The Barrel-Aged Six is also an unusual and tasty beer.  Matured with Urfa Biber, a sun-dried Turkish chile, in a Pinot Noir barrel, the fruity tartness fiercely competes with the heat of the chile and surprisingly, your taste buds end up winning. I’d wanted the beer to warm a bit, so I went out for a 15 minute walk when the beer was first served. When I got back to my table, the ale had warmed, and as I drank it, the beer’s initial tartness gave way to the absolutely subtle, though persistent, flavor of the chiles in an intriguing way. The Barrel-Aged Six, with its combination of tartness and heat, together with the Smoked Duck Sausage with Lentils, made for one of the night’s best food and beer pairings.  The earthy lentils and sausage balanced out the exotic heat and sour taste of the beer perfectly. As I reached the bottom of the glass, and scraped my fork across the empty plate, I’d wanted a repeat of that course. But little did I know what culinary delights awaited me.

The most memorable moments of the dinner were the sublime first sips of the Laurelwood Deranger Organic Imperial Ale, immediately following the Upright Six.  Because I’d gone for my walk, I’d barely finished my glass of the Six when the server slid the Deranger in front of me.  Paired with a Chili-Coffee rubbed Beef Ribeye,  the Deranger’s rich, sweet maltiness was brought out, emphasized, in a way that could only have happened because it was contrasted with something as different as a hot and sour beer. 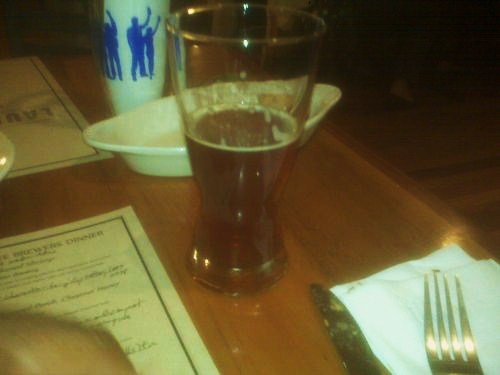 As is often the case, it is much easier to appreciate one style, when it is contrasted with another, very different approach.  That is certainly what happened when the Deranger followed the Upright Barrel-Aged Six.
After enjoying the crazily different pucker and spicy heat from the Upright beer, those first sips of the Deranger, an Imperial Red, quenched my taste buds’ most urgent needs.  The malty sweetness settled in first, but then the spiciness and the hops started to dance around on the tongue and by the time I’d had several sips, I didn’t care about the Ribeye.  The Ribeye, however, turned out to be delicious and perfectly matched with the Imperial Red.
Without question, the Deranger was the beer highlight of the night.  Did the chef and brewer understood just how satisfying the imperial red would taste after the sour?

Laurelwood also offered two other beers, their Workhorse (simply one of the best IPA’s around) and the Piston Pale Ale – a Laurelwood oldie but goodie that has been resurrected for another go round.  Both of those are very fine ales, though neither provided the sheer delight of the Deranger. 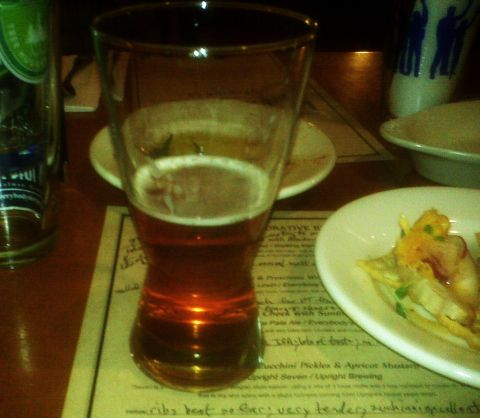 All in all, a great night of food and drink.  When I list my favorite local breweries and my favorite beers all four participants and their beers rank very highly.  There were some firsts (I ate peaches for the very first time in my life and tried the Walking Man Pilsner for the first time) but finding new pleasures in familiar beers and food can be just as rewarding.  Hopefully, this will be the first of many such collaborations, and if they do happen in the future, they’re well worth attending.