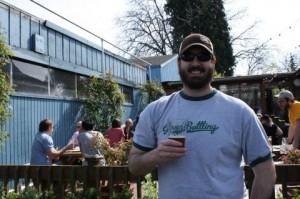 Brewer Zach Beckwith of the Lompoc Brewniverse gives us an update of the goingson at one of our favorite PDX craft beer outlets.

(W)e’re having a release party for Black Dawn II Coffee Stout and Illegally Blonde at the Sidebar and as with all our Sidebar releases we’ll have some other special beers pouring as well. With our barrel aging program finally starting to reach maturity check out Sidebar in the coming weeks for some brand new barrel-aged beers including Bourbon Barrel Aged Crazy Dave’s Imperial Stout and last year’s Cheers to Belgian Beers entry, Norman Invasion Biere de Garde, which has been aging in wine barrels since last February. We’re also in talks with BeerMongers about a Lompoc night in the coming months featuring some rare and vintage drafts.

On the brewery side we’re in the midst of adding a grain silo and planning on installing a brand new 15 bbl brewhouse at the Fifth Quadrant sometime in February to help keep up with demand here in Portland as well as to feed new accounts in the Seattle area.

So henceforth, a toast is in order. Get your butt down to Lompoc and quaff away, lil dogie!