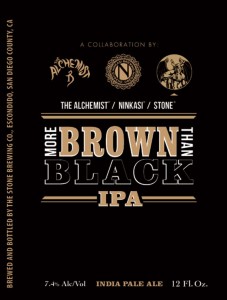 Greg Koch from Stone Brewing and Jamie Floyd from Ninkasi Brewing will both be in attendance at The Bier Stein in Eugene on January 6, 2012 from 7-9PM for the release of “More Brown Than Black“, a dark hoppy collaboration brew from Stone (Escondido, CA), Ninkasi (Eugene, OR), and the Alchemist Brewpub (Waterbury, VT). The beer, Stone’s fifth collaboration brew of the year is a benefit for The Alchemist, which was devastated by the effect of Hurricane Irene earlier this year.

For more details on this beer and its inspiration, check out this link on BeerNews.org.

Oregon Stone Brewing rep Erin Kremplin says “(Stone) will also be doing an event the next day, Saturday the (January 7, 2012)  at Belmont Station with just Greg Koch. I am still working on the details of that and I will follow up with them soon.