This past week I was sent to Corvallis for my job for training at OSU. While in town I had to stop by Block 15 to see if there was anything new on the beer list. To my delight there were a few new items on the menu, including an Imperial Red and a single-hopped beer. Many breweries have done both styles of brews but I’m learning that Block 15 always does things in a very calculated and unique manner. Block 15’s first batch of it’s single hop beer series or as they call it their “One Hop Wonder” contained a hop I was not familiar with. The hop used was Cluster. The Home Brewing Wiki has this to say about the Cluster hop:

“Cluster may be the oldest variety of American hop and may be derived from wild North American hops, possibly crossed with varieties introduced by early English or Dutch colonists. These days, hops sold as “Cluster” may be any one of several closely related, all but interchangeable bittering hop varieties, with a sharp aroma and flavor that can have a dark fruity, blackcurrant character.”

While I don’t think this beer will make its way to Portland, Corvallis is only an hour-and-half’s drive south. I asked Nick Arzner, Block 15’s owner/brewer, some question about the brewery’s One Hop Wonder, new beers coming and hops.

How often does a One Hop Wonder get produced?

Nick Arzner: We just released the series on April 5th. As this beer is flying out the door, I’m guessing there will be a new batch about every 3-4 weeks. 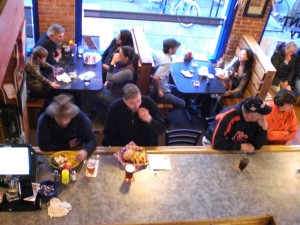 This time around you used Cluster hops. That seems to be a hop that is not talked about much. Is it really more common then the public could image or is it more of a specialty hop?

NA: Currently Cluster is not a sexy, trendy hop, which I like. It really is dual purpose with enough alpha acids to provide good bittering, but also some great spicy, earthy, fruity and citrusy flavors and aromas. Also, its origins are pretty cool, possibly the oldest variety of American hops derived from wild North American hops and crossed with varieties introduced by English colonist.

What made you decide to use it?

NA: I wanted to start with a hop that is in the middle of the alpha spectrum, and then swing up and down from there. Cluster (7.7% alpha acid) is a good benchmark to set. We also use Cluster in several of our other brews (Alpha IPA, Ridgeback Red), so it if fun to have a One Hop Wonder, followed by an Alpha IPA, so you really can pull out the character it gives the brew. 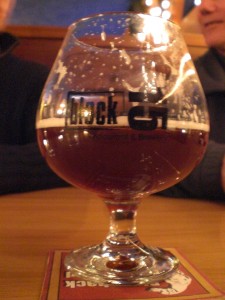 Do you have a favorite hop?

NA: That’s a trick question! It really depends on the type of brew. For big hoppy brews I really like Amarillo. Unfortunately, our hop contract has a limited amount so we only use them in our Pale Ale and in specialty brews. Next year our amount of Amarillo doubles so we will use them more often. I also like to use Nobel hops such as Golding and Fuggle. These hops give more pleasant earthy and fruity aromas and flavors; a nice detour from the high alpha hops you find in the NW so often. Our Aboriginale uses a combination of big alpha hops for bittering and flavor, followed by a healthy dry hop dose of Fuggles, which makes for a very interesting and pleasant hop profile.

Do you know what hop will be used in the next One Hop Wonder?

NA: We are using Chinook for the next One Hop Wonder, then swinging the opposite direction and brewing with Saaz. Yep, a Saaz IPA. I’m not sure if that’s been done!

Any special beers coming from Block 15 in the near future?

NA: We always have a few brews in the cellar. On average we tap a new batch every 1-3 weeks, which is what keeps our lineup fresh and exciting. Here is a peak into our Cellar:

We also have a Dark Belgian Inspired brew that we are bringing to the Cheers to Belgian Beers Fest. Part of the brew is aging in new Oregon oak barrels. I don’t have a name yet…but hopefully the beer will speak to me soon.

Also, we are brewing our very popular “Block Head” Imperial IPA soon to be released in May.

Block 15’s Pappy’s Dark seemed to be a big success in Portland (lots of bloggers wrote about it). Was it your first bourbon barrel aged beer?

NA: We aged two bourbon beers last fall. One was our Pappy’s Dark, the other was Super Nebula, Imperial Stout. We coined January “Bourbon Month”, releasing both brews, creating an awesome Kentucky Straight Bourbon list at killer prices, and using bourbon in our food specials.

Any comments on this beer?

NA: For Pappy’s I wanted to create something different than the other Bourbon Barrel brews out there. When designing beer, I always dream about the finished product and work backwards. I wanted the beer to be bourbon forward, with a supporting malt profile, but not obtrusive. I also wanted the beer to have the appearance of bourbon. I’m a big fan of Belgian and European specialty malts and I brewed with Belgian Aromatic, Brown, and Spec. B. These malts provide great bready, malt, caramel, and currant that worked harmoniously with the vanilla, fruit, cocoa, bourbon, and wood from the barrels. When we first pulled Pappy’s out of the barrel it was pretty hot, but extended cellaring mellowed the brew into something completely unique.

Do you have any left?

NA: I have one keg in our cellar. We will most likely release it sometime in July or August, halfway to our next batch. Our website is being overhauled, but by mid May we will have real time tap lists, cellar lists, and special beer releases. Also you can follow us on twitter to make sure you don’t miss the release. I do not expect the keg to last more than a day or two. This year I’m sourcing four times the bourbon barrels so we can send more kegs up to Portland tap houses and bottle condition a batch.

Thanks Nick! I had the Imperial Red tonight at the brewpub and to be honest, I could not tell it was 9%. It was very nicely balanced between the hops, malts and alcohol with a great caramel up front flavor and finishing with just the right amount of hops. Great Beer!

NA: Thanks! I really love big Reds. They are a great brew to drink relatively young with big juicy hops and sweet malts, and also age up very well with time, turning into a completely different experience. We are working on a very small bottling program, all bottle conditioned. Our Aboriginale will be a mainstay, with other big beers rotating a few times a year. King Caspian, our Imperial Red, will be the first specialty brew we release. We should be able to roll out the bottles by August but will only be available at our pub and Corvallis Brewing Supply. 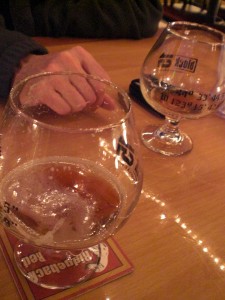