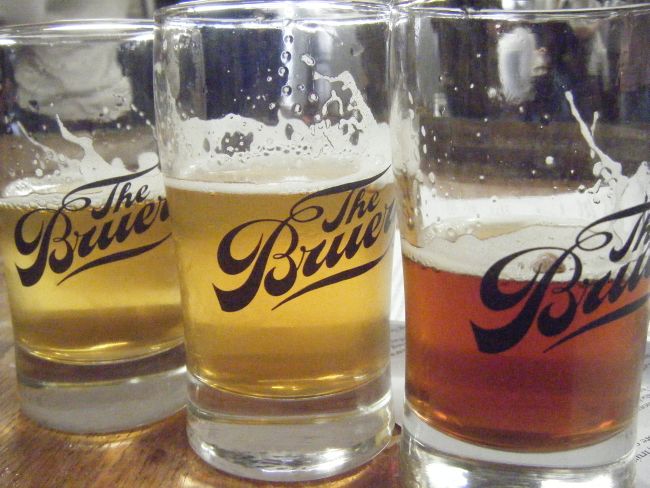 Last weekend I took a trip to Los Angeles. I did not go specifically to visit breweries and craft beer bars in the area because if you think about it, LA is really not the first place that comes to mind when wanting great beer. Despite the LA area not being known for its microbrew scene, there are plenty of places to enjoy a standout malty beverage in the area. In fact, a trip to the area would not be complete for any beer geek without a visit to The Bruery. Located in the back corner of an industrial park in Orange County in the town of Placentia, The Bruery is a gem of a beer spot. The tasting room is situated between the brewing equipment and stacks of barrels, giving the place a welcoming and cozy feeling. 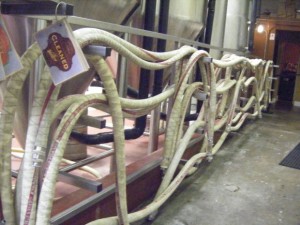 During my visit I met up with Aaron Horwitz, the tasting room manager. He gave me a tour of the place and I was lucky to try the just bottled Cuir (third anniversary beer, see below on details on that). The tour consisted of the usual things you hear and see in any brewery tour; barley mill room (but complete with a spice rack), brewery equipment (with varying hoses to be used depending if a batch of beer is going to have Brett or Lactic), a bottler, and barrels, lots of barrels. Aaron also gave me a tour of the beers on tap. Besides the usual offerings a few of the highlights included a Loakal Red, three versions of the Saison De Lente (2010, 2011 and Brett-free), Humulus XPA, Old Richland (American-style barley wine), and Cuadruple (a quadruple brewed with agave syrup instead of Belgian candi sugars). My favorite of these was the Loakal Red, which was a blend of The Bruery’s fresh red ale and the same red ale oak aged. The two mixed to a perfect combination that resulted in flavors of toffee, vanilla and definitely oak. Thanks, Aaron for a great time tasting beers! 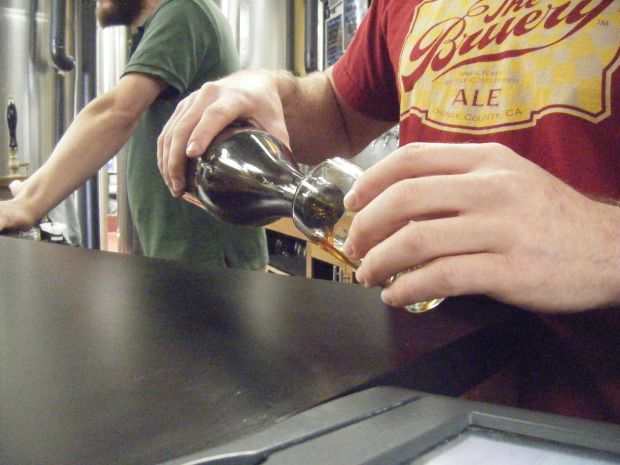 There are many elements that make The Bruery a unique brewery that really takes pride in the beers it makes. Their artistry and ingenuity is illustrated in every single batch that they make. Their beer is a unique take on Belgian imagination, as they use Belgian yeast in their brews.

Having had a great time at The Bruery I contact Ben Weiss, manager of sales and marketing, who I met last year while he was on a visit to the Portland area. I wanted to get some more info about some of the special releases that The Bruery has coming out that have been in the news lately and learn a little more about this young brewery. 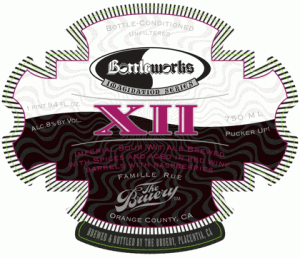 It was announced that The Bruery has brewed the anniversary ale for Bottleworks this year. When is the release date and what will be the availability of the beer?

Ben Weiss: Bottleworks XII will either be released this weekend or next, it’s up to Bottleworks.  It will primarily be available in Seattle at Brouwer’s Cafe / Bottlerworks.  A few bottles will be available at our Tasting Room and retail shop, but the majority will reside with Bottleworks.

Also, The Bruery just bottled their own anniversary ale, a 14.5% old ale. Could you provide me with some info about this beer. Name, release date, beer description, etc.

BW: Our third anniversary beer is called Cuir which means Leather in French.  Leather is the third traditional wedding gift and follows our Papier and Coton releases of the past two years.  It is the same Old Ale recipe as we have used for the previous beers and similarly, we are using the solera method for these beers so a bit of each year’s anniversary ale is saved in barrels and blended back in with the new year’s recipe, creating an even more complex beer from year to year.  It will be released in May.  The label has not been designed yet, but will be similar to the previous two years. 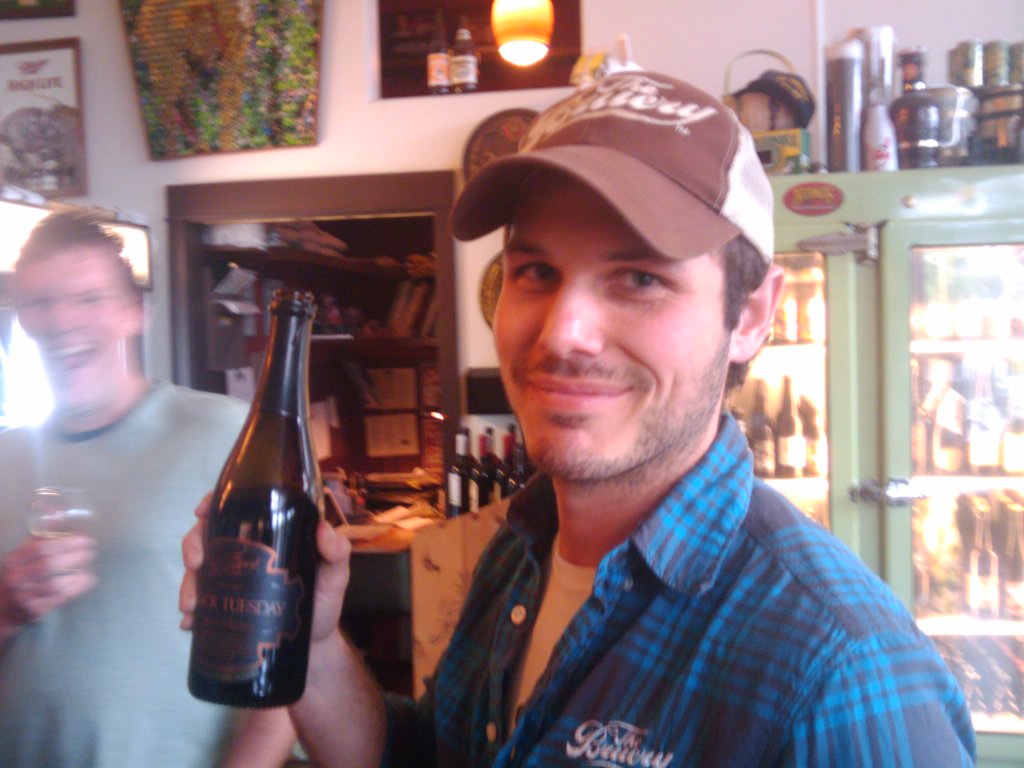 This will be the third anniversary for The Bruery. How has it grown/changed over the years?

BW: The Bruery has grown quite a bit in three years.  Most critically, we just recently installed new fermentation capacity that will increase our brewing capabilities by about 80 to 90% annually. We obviously have more people working for us since the early days, but overall, things have stayed pretty stagnant with the way that we do things.  We’ve always been committed to creating as many interesting beers as possible and through the years our barrel aging program has increased so hopefully we’ll be able to start releasing many more sour beers and other barrel aged brews in the future.

How would you describe the LA/OC beer scene and how does The Bruery fit into it?

BW: The LA/OC beer scene is actually a great reflection of The Bruery…it’s young and it’s growing.  While San Diego has had incredible craft beer for nearly 15 years, there are still only a few young breweries in LA and OC and the first craft beer bars really only sprouted up about five years ago, but in the past couple of years there has been a big push towards craft and local and many new bars have opened, many long standing bars have started to change the beers that they serve and a number of restaurants have began to add craft beers to their drinks menus as well.  It’s a great place for a young company like ours to be.  Hopefully our brewery and the LA/OC craft beer community can grow side by side in the years to come. 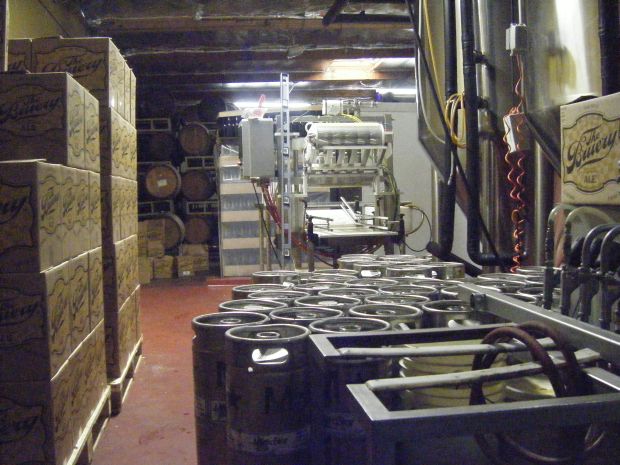 Could you describe the barreling program. Where do your barrels come from, what is the capacity, what inspired it. 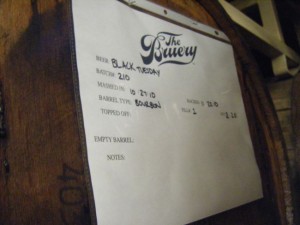 BW: It has always been a goal of ours to have a large barrel aging program so that we can one day have a constant rotation of barrel aged beers on store shelves.  We’re big fans of Belgian style sour ales as well as big, oaky beers.  All of our wine barrels come from local California wineries and our bourbon barrels vary, though we use the same supplier as the majority of the Midwest (including Cascade and the Portland breweries), so we end up with a mix of rye, brandy and bourbon barrels.  To date, we have around 300 barrels with a pretty even split for sour beers or strong ales.  As we are now hitting our three year mark as a brewery, we’ll soon be able to release a more steady supply of aged beers.

What does the future hold for The Bruery?

BW: As for the future, we’re focused on filling up our new fermenters with as much beer as possible right now.  We are brewing one special beer each month for our Provisions Series that is sold only at our Provisions store in Orange and we are of course still brewing plenty of limited release beers for our Reserve Society.  There are always thoughts of expanding distribution, but for now we plan to focus primarily on what we have going and just trying to keep on making quality beers.

Any collaborator beers in the works, special projects or new beers for the line up?

BW: We’ll be releasing our collaboration beer with Cigar City Brewing (Tampa, Florida) in late March/early April in California and Florida and it will have a wider release shortly after that.  It’s an imperial oud bruin that was barrel aged for over a year.  We have also just started working on a recipe with Sean Lawson of Lawson’s Finest Liquids, a nano-brewery from Vermont, so hopefully that will be available later this year. 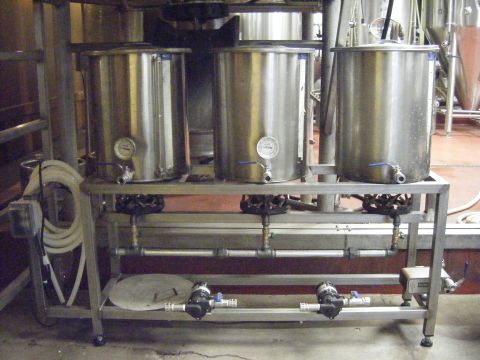 The weekend I was visiting, The Bruery held their batch 300 tasting. How does the batch 300 series work?

BW: Our “batch #” series has been done for the very first batch of beer here, the 50th batch and now the 300th batch.  Patrick (Rue) and the rest of us all started off as homebrewers and we firmly believe in keeping that tradition alive, so when we can, we run homebrew contests to determine a beer that will be brewed and bottled by us.  The Batch 50 winner was a Gueze, so it hasn’t been released yet, but should be out late this year and the Batch 300 winner is an Oaked Tripel, so that beer should also be available later this year.

In addition to the tasting room The Bruery also has a bottle shop located in Orange, CA not too far from the brewery location called The Bruery Provisions. Here you can find specialty goods which includes cheese, chocolates, teas, coffees and of course beer. A tasting room is also located in the shop and events featuring special products or taps is a regular occurrence. Check The Bruery Provisions website for a calendar of events if you happen to be in the area ( http://www.brueryprovisions.com) .

For more information on The Bruery and their fine beers, visit their website:   http://www.thebruery.com