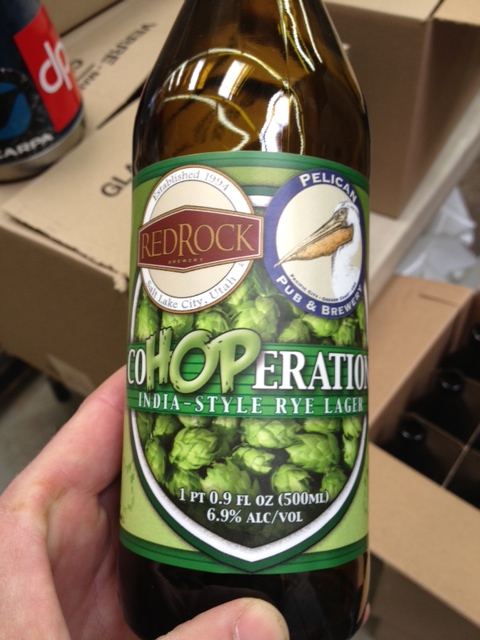 Pelican Pub & Brewery of Pacific City, OR has teamed up with Red Rock Brewing of Salt Lake City, UT to produce a new beer called CoHOPeration (no relation to the Fort George Brewery’s fresh hop ale, “CoHOPerative”). In a recent press release, Pelican announced that 300 500ml bottles of CoHOPeration will be made available at select bottle shops around Oregon and a small portion will be be served on draught exclusively at Pelican’s coastal brewpub. Both Pelican and Red Rock boast being previous winners of the Great American Beer Festival‘s “Large Brewpub of the Year” award. According to a recent press release sent out by Pelican, the idea for CoHOPeration came about while Pelican brewmaster Darron Welch and Red Rock brewmaster Kevin Templin were judging at the North American Beer Awards in Idaho Falls, ID in 2011. Here’s more from Pelican:

The concept for this beer is to be very hoppy, with the hop bitterness and profile of an IPA, but with the hop character of a pilsner. Cleanness of the flavor profile will come from fermenting with lager yeast. Added spiciness will complement the malt character by including malted rye. A unique hybridization of existing beer styles has created something completely new and different.

“This was a great opportunity to create something new and different, yet with clear stylistic and historical roots, to learn by working with each other, and to just have a lot of fun making beer, which is an industry core value!

The Pelican Pub & Brewery, located 22 miles south of Tillamook on the majestic Oregon Coast, has become a Northwest landmark for craft beer and fine food enthusiasts. The oceanfront facility includes an outdoor patio and banquet room with unobstructed views of Cape Kiwanda and Haystack Rock. Celebrating its 16th year in Pacific City, the Pelican has created countless masterpieces such as Kiwanda Cream Ale, which was named to DRAFT Magazine’s Top 25 Beers in the World of 2008, 2009 and 2010. Other award-winning brews include India Pelican Ale, MacPelican’s Scottish-Style Ale, Tsunami Stout and Doryman’s Dark. The three-time Great American Beer Festival “Brewpub of the Year” winner is open seven days a week, serving breakfast, lunch and dinner. For more information, call 503-965-7007 or visit www.PelicanBrewery.com.