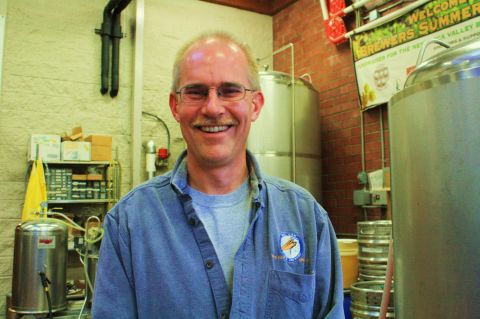 On July 14 in honor of the French National Holiday, Bastille Day, Pelican Brewery will release a new one-off beer called “The Guillotine,” which is made with experimental hops from Alsace, France. The Guillotine will be an international-style pale ale that is golden hued and slightly stronger than other brews at 6 percent ABV—a perfect beer for summertime on the Pelican patio. The Guillotine will be available on draft only.

We recently spoke with Pelican brewmaster Darron Welch to find out more about this exciting if not interesting new beer.

“This (hop) is an experimental variety from the grower’s co-op” said Welch. “It’s the first product of the breeding program.” When asked what the hop is called, Welch said “It’s a no-name hop. It’s referenced as P05-9.”  So how did a craft brewer on the Oregon Coast come to find such a specimen? “I came across a tiny booth at the Craft Beer Conference in Chicago a few months ago” said Welch. ” A representative there named Francis (Heitz) and I got to talking about experimental aroma hops. And, he asked about (Pelican) doing variety brewing trials.” 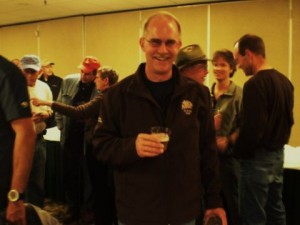 Interested in the hop mentioned by Heitz, Welch and company returned to their quiet life and brewing routines in Pacific City. “About six or eight weeks later a mystery box arrived at the brewery” said Welch. “I had forgotten about it.” With the shipping information lost in transit, Welch spent the next week and a half trying to figure out who sent it. Finally he was able to discover that his new friend from France had been responsible. When we spoke with Pelican’s brewmaster, he was just gettin ready to brew a batch of beer with the new hops. “We’re making a beer designed to be straight ahead” he stated. “It will be a beer that allows for the characteristic of the hop to be prominent.” The beer will employ Northwest Pale Malt at 14 Plato and 40 bittering units, folks able to try it at the pub will find a hop-forward beer with a bitter 1.3 kilos of lupulin. “(We) used Magnum (hops) for 90 minutes in the boil. The entire (experimental P05-9) hop charged the beer as a dry hop addition in a 15 barrel batch” siad Welch. When asked about what sort of attributes the new hop will provided to the brew, Welch said he was unsure. “According to (Heitz’s) description, it’s a mild green herbal variety; spicy and slightly citrus.”

Are you a beer geek? Did you need an excuse to get down to the Oregon Coast this summer? Looks like now you’ve got one.

The Pelican Pub & Brewery is located at 33180 Cape Kiwanda Drive in picturesque Pacific City, Oregon. Visit them online at www.pelicanbrewery.com