More Foreplay Before the Big Day 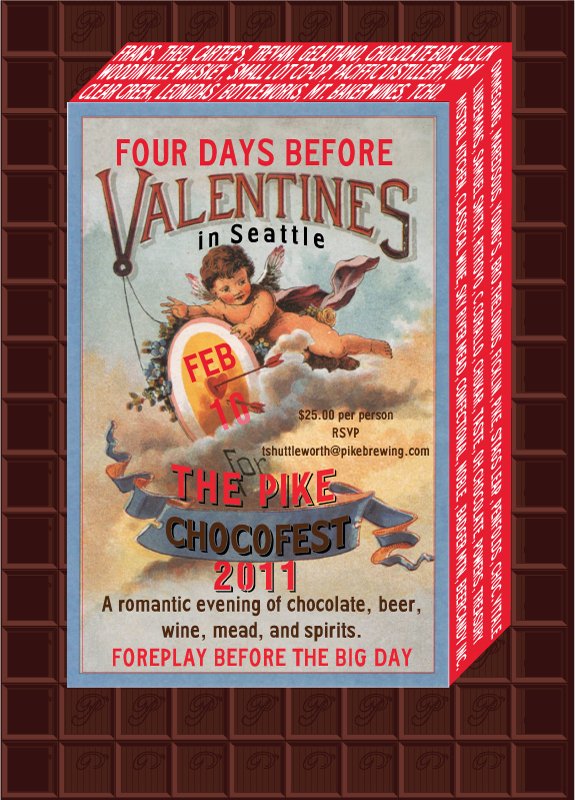 Pike’s 3rd Annual Chocofest is a romantic and educational way to discover the wide variety of chocolate treats from here and around the world. Stations set up throughout the Micro Brewery Museum and Naughty Nelly Room feature different chocolate treats, each presented by an expert (often the producers themselves). Adjacent to each chocolate table is a drink table staffed with experts to sample and explain their beverages. This year more than two dozen different chocolates will be sampled along with more than 20 different beers, wines, mead and spirits.  Please join us for this fun and educational event.

Why Seattle? people ask when they learn that “Portland and Seattle are the top two craft beer markets in the world,” according to the Eyewitness Companion to Beer, edited by Michael Jackson, and published posthumously. And it’s not just beer! With more than 800 local wineries to choose from, we are a wine haven that few other places can rival. When the White House recently entertained Chinese president Hu Jintao, a Washington State wine was chosen. Think coffee? Think Seattle. Love cheese? Seattle’s annual Seattle Cheese Festival is our country’s best! In 2010, The National Cheese Society chose Seattle as the site for their annual conference. When the law was changed a couple of years ago making craft distilling a viable business model, would-be distillers jumped on the band wagon. Our state now has more craft distilleries: thirty-five, with another twenty applications pending, more than any other state. Bread? Names like Macrina, Columbia City, Tall Grass, Grand Central, Essential, and La Panzanella are fresh on our minds, No Wonder! Then there’s chocolate, which like coffee, won’t grow here because of our climate. Perhaps because of our weather, the Emerald City could be called the “Cocoa City”. Fran Bigelow, with her extraordinary salted caramels, favorites of President Obama, put Seattle on the chocolate map. A tour of Theo’s, our “bean to bar” organic chocolate maker located in Fremont, is both educational and delicious. Local chocolate truffle makers, like Carters and Trevani abound, and not surprisingly, Seattle is the home of the importer of one of the world’s best chocolates, Claudio Corallo, estate grown in the tiny African country of Sao Tomé. Leonidas, the best chocolates of Belgium, along with a phenomenal selection of that country’s great beers, are available at Bottleworks in Wallingford. And just around the corner from Pike, The Chocolate Box offers locals and tourists alike a world class selection that makes every guest a winner of Willie Wonka’s golden ticket!

Though not as old as beer, wine or mead, cocoa trees, from which chocolate is created, were used in the Amazon more than 4,000 years ago to make a drink which was seasoned with herbs from the forests and countryside. Early people attributed fertility to the pods, which are said to resemble human genitalia. By 600 AD, the Mayans began to cultivate the earliest known cocoa plantations. They had faith that chocolate

was the god’s favorite food. The Aztecs agreed, adding that it was the ultimateaphrodisiac. Love itself may be free, but chocolate has always been a luxury and has even been used as currency. So much for free love, the pleasures of a luxurious Central American brothel were recorded to have been purchased by Hernando de Oviedo y Valdes, a member of a Spanish expedition in 1513 for 10 cocoa beans! Legend tells us that Emperor Montezuma drank upwards of 50 goblets of thick red chocolate daily, throwing the solid gold goblets away after each use. Though today such conspicuous consumption is politically incorrect, Valentine chocolates are still wrapped in red paper, often presented tied in golden ribbon. Cortez, who was the first Westerner to cultivate cocoa, sent a gift of American cocoa beans, back home to Charles the First. In order to make the bitter sweet, he added sugar and vanilla, nutmeg andother spices, all exotic imports at the time. Charles fell in love. So did the Pope, who approved its consumption on Fridays. The chocolate craze was revolutionary, soon spreading to France, Italy, and Switzerland. Thirteen years before the Declaration of Independence was penned, New England business people signed on to build this country’s first chocolate factory. The 19th century saw solid growth and by 1830, the English introduced the first chocolate designed to be eaten as a confection. The Swiss, Belgians. Italians and Dutch all have legitimate claim to chocolate’s hall of fame, but as quick as you can say “cocoa nibs”, in the 21st Century, Seattle, dripping in truffles, caramels, gelato, pralines, and cocoa has become “chocolate central” rivaling Europe’s chocolate capitals.

Where: The Micro Brewery Museum and Naughty Nellie Room