Pyramid Brewing Co. has been working on a new barleywine that will surely come as a delight to craft beer lovers across the country. Currently the beer is just in its trial stages, according to Pyramid’s Portland brewery manager Doug Hodges. “Kim Brusco just did a trial for us in Seattle, and we just got a sample here yesterday” says Hodges. The official beer to be released will be brewed this summer at their Berkeley location and will be featured as a part of their fall variety pack slated to release on August 1, 2012. “There will be a limited amount of draft for the alehouses” Hodges adds, informing us “The trial was pushed along pretty quickly, not given much time to age. We mostly wanted to make sure we could hit alcohol, and to check the general flavor profile. It wasn’t carbed either. It’s going to be big, but we’ll age it longer and finish with a lower AE, take some of the sweetness off it. The production run won’t be barrel aged. I asked Kim if he could rack some into a whisky barrel, not sure if he used them all up yet.”  Pyramid’s Barleywine look to use 2-Row, Carmel malt, Munich, and a touch of black malt. Hop varieties will include Nugget and Centennial. 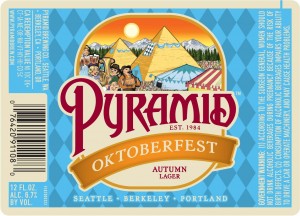 Pyramid of Portland’s next new releases will be new MacTarnahan’s fall seasonal Scottish ale, and Pyramid’s fall seasonal Octoberfest, which will replace Juggernaut Red Ale. Hodges says “Also we’ll do a draft only red wheat with fig beer—all these will be August 1st releases. Right now we’re also in the midst of Full Bloom brewing for national distribution. Portland lead brewer Ryan Pappe also just fermented some grifter with the Czech lager yeast—India Pale Lager. Business in the front, party in the back baby. Turned out real nice.”

Kudos to Pyramid for continuing to improve and to provide craft beer lovers with these wonderful new offerings!