Chris Miller has been the brewer at Snipes Mountain Brewing in Sunnyside, Washington for more than two years. The brewery has had its share of talented brewers since its inception in 1997, but it certainly tastes as

though Miller is the best yet. His recipe development and creative artistic approach to the craft attracts beer enthusiasts from all over the Pacific Northwest and beyond to the humble blue collar Central Washington farm town. In the heart of the largest hop producing region in North America, about 35 miles southeast of Yakima, Snipes Mountain resides in a large hunting lodge-like abode with high ceilings that encompasses a long oak bar, a tall rock-clad wall atop a fireplace hearth, and a cozy wood-fired pizza oven. This is the forum for getting a firsthand experience of Miller’s diverse and delicious repertoire of beers. 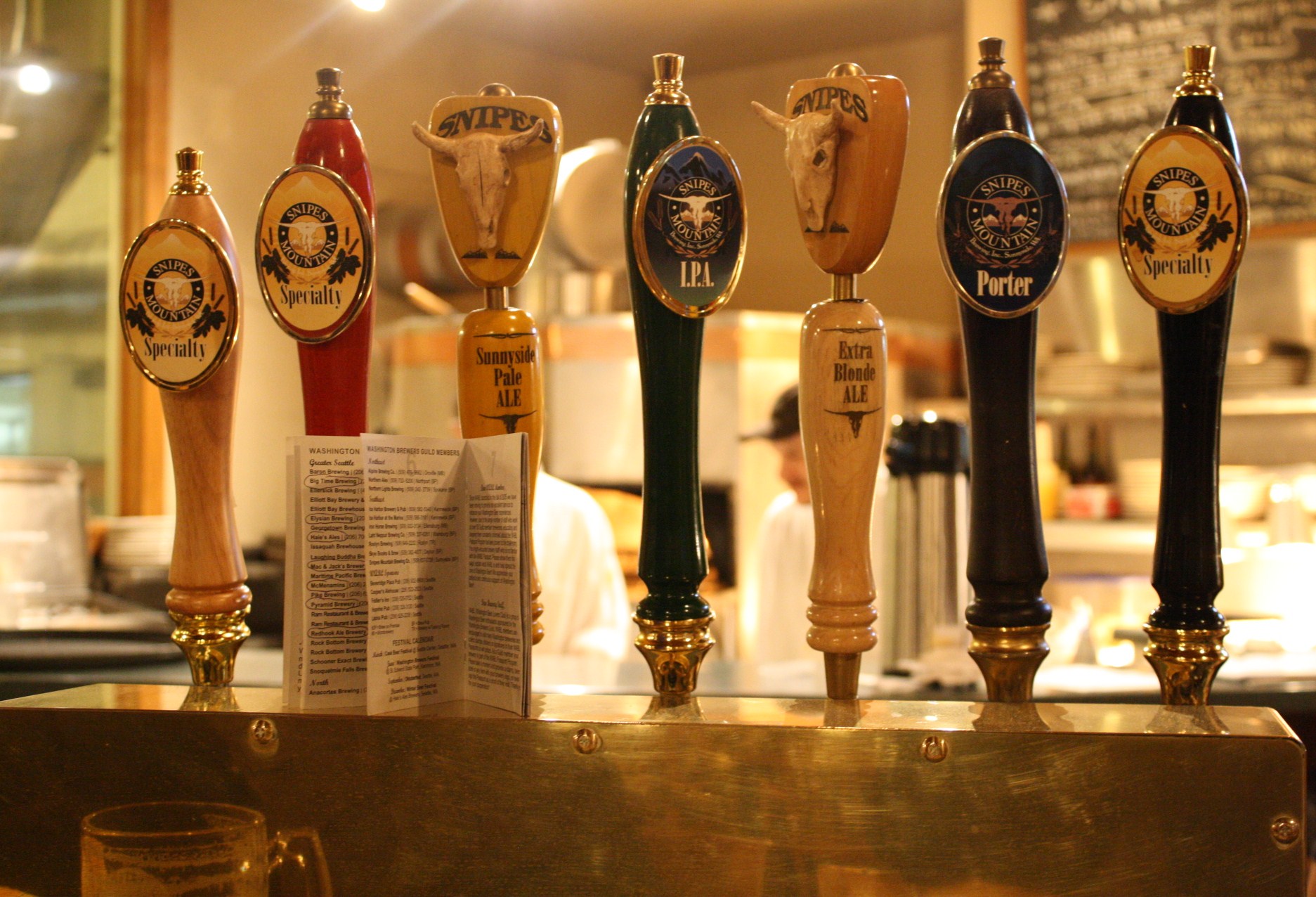 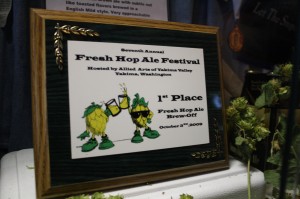 Miller has spent about a decade in the brewing industry and more than four years as brewer at the now defunct Pacific Rim Brewing (now under the name Big Al’s Brewing) in Seattle. One of Miller’s most recent accomplishments was winning a bronze medal at the 2009 Great American Beer Fest for the brewery’s signature mild ale, the Coyote Moon Brown Ale. In addition, Miller set the brewery apart from the plethora of hopped-up others at this year’s Yakima Fresh Hop Festival by taking home first place for his Harvest Ale. Rich with floral Simcoe and Citra hops, the easy-drinking beer is a bouquet of aromas glorifying this year’s hearty yield.

Behind the scenes in the brewhouse that is visible to guests through a clear glass window, Miller works with a 15-barrel system to produce between 700 and 1,000 barrels annuals of both perennial favorites and specialty 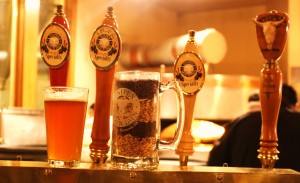 one-off brews. A stack of wooden barrels encase some of his aged exclusives like the Pumpkin Death, an imperial stout employing more than 200 pounds of oven-roasted pumpkins. Miller has also had the fortune of being in the throes of wine country and has access to barrels once filled with white wine, red wine, and port for which serve as a palette for some of his art. Pouring at the bar on an unmarked nitrogen tap was a special 2008 Winter Coyote aged in Hungarian oak for about four months and fermented in oak staves. This imperial brown ale version of the award winning brown (no sparging) imparted a distinct creaminess and a warming alcohol glow (at about 8% ABV), and a bright hop presence from from “one big bag edition.” 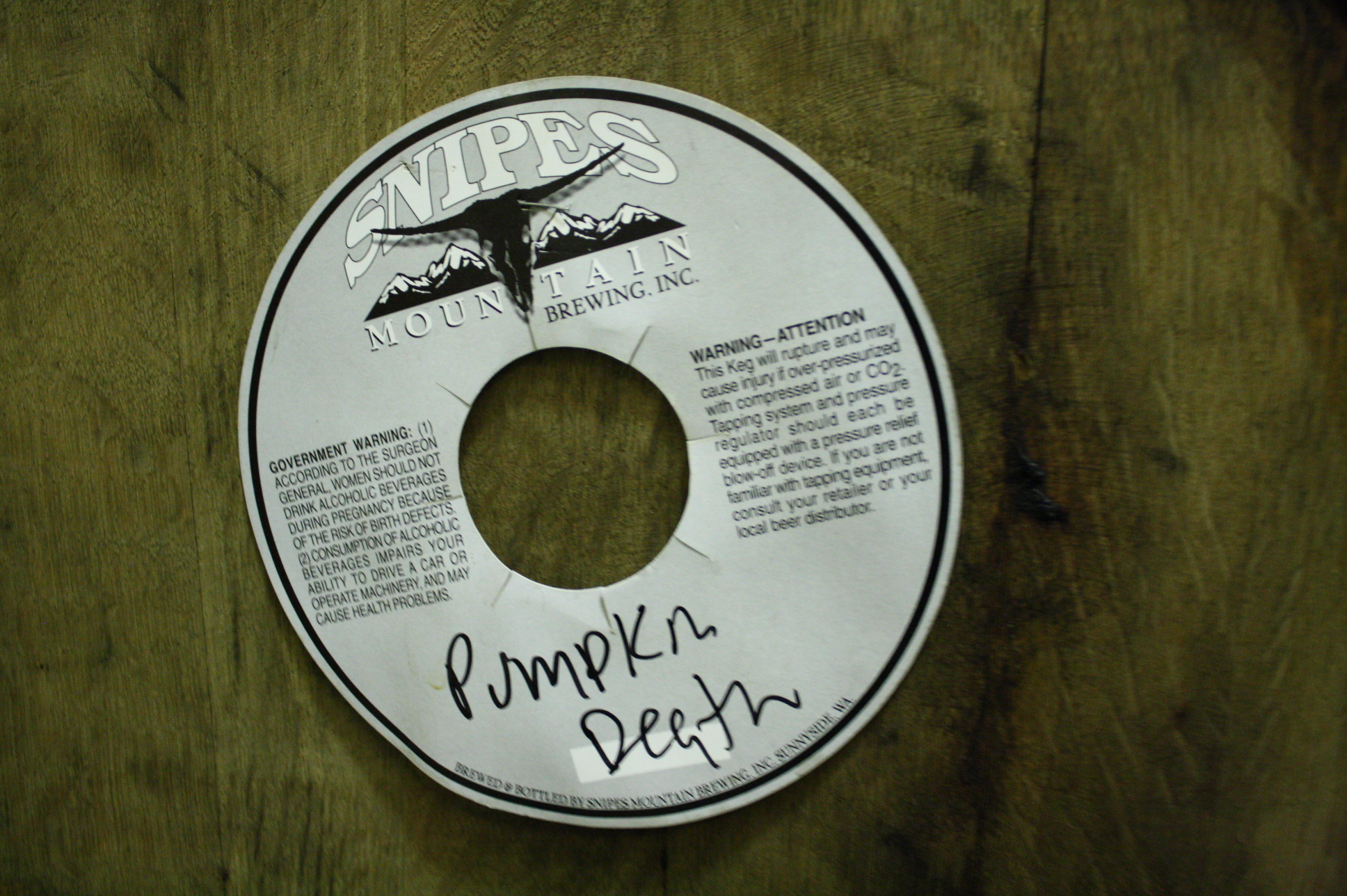 Also pouring on this particular evening were the High Desert Pale Ale, Hop Valley Common, ’09 Latetoberfest, and the Diminished Return Double IPA.  All were excellent. While quaffing and touring the brewhouse we had the fortune of interviewing Miller about the brewery, his success, and his wonderful array of brews.

Chris Miller: I brewed for a while in Seattle, and I’ve been (in Sunnyside) for more than two years. It’s been fun turning on these-I don’t want to say hillbillies-the folks to quality artisanal beverages when they’re used to drinking the lighter American lagers. That’s been both kind of fun and a task. I am trying to get people to drink more cerveza out in the desert.

It is impressive that you took first place at this year’s Yakima Fresh Hop Fest. What was that experience like?

CM: Other than the fact that I’m twenty minutes away from the (hops) farms…I got the hops I needed for the brew, brought them back within forty minutes they were basically in the beer at some way shape or form. Then I got the luxury of actually wet hopping the beer after it had fully fermented. I put it into the conditioning tank on 30 pounds of Citra. Last year I came in second place and I wasn’t really satisfied with that. I wanted to step it up a notch.

Very impressive. Also impressive is you winning the bronze medal at GABF for the Coyote Moon Brown Ale. What was that whole experience like and how does it feel to take home the bronze?

CM: It was a lot of fun. I’m surprised I brought myself back, let alone a medal. It was five days of madness. It was fun trying a lot of different beers. There’s a lot of really good beers out there, you just have to find them. And, everybody’s palate is just a little bit different so it’s something to look forward to, every pint…I’m on the quest for the perfect one.

Any highlights at GABF this year?

CM: There was a ton of highlights. Bringing a medal home didn’t suck. Also, just having a good time with a bunch of like-minded folks and getting out of Sunnyside for a couple days wasn’t too bad either. 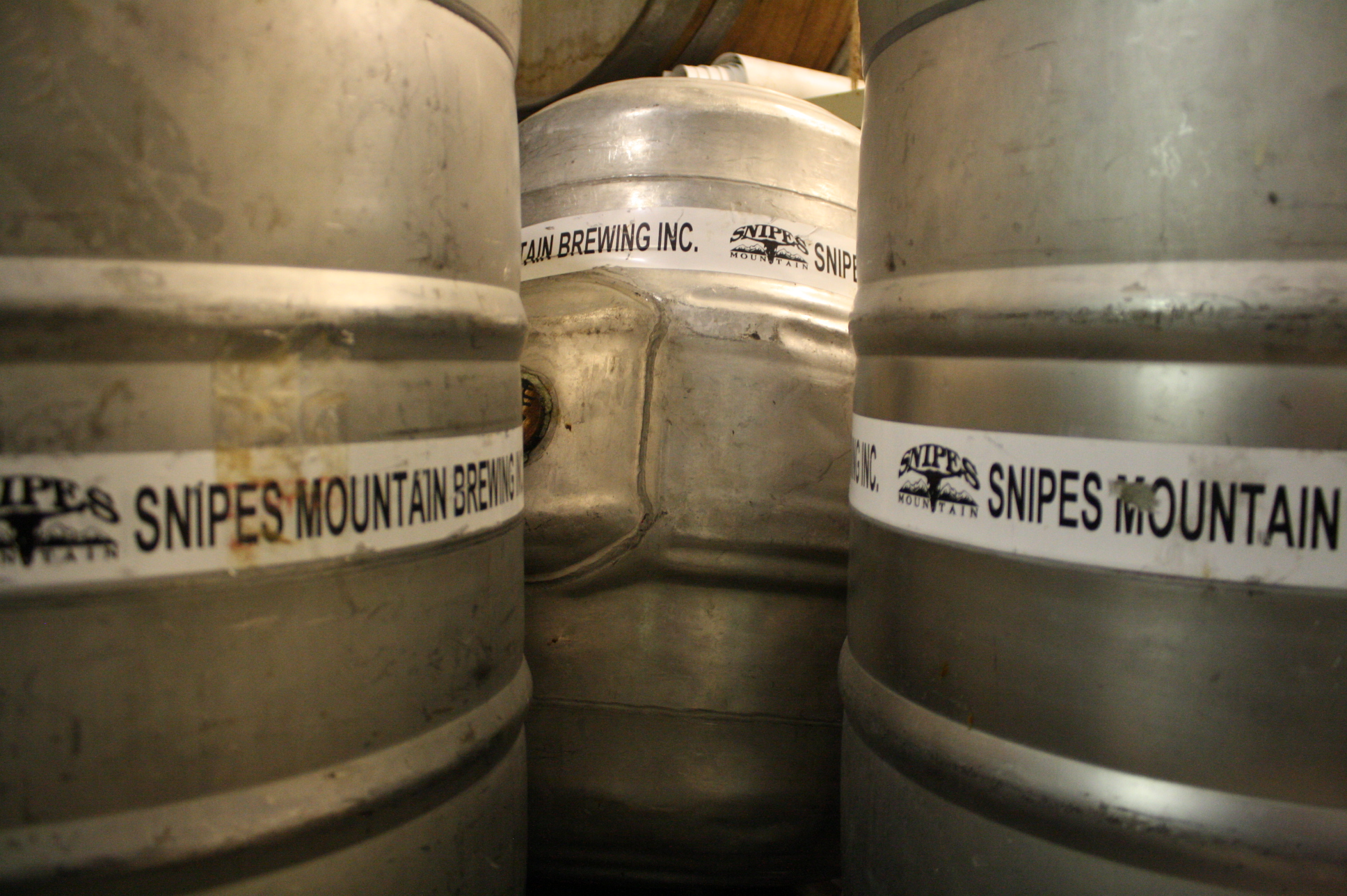 Do you think you’ll be sticking around here for a while? What’s your future aspirations in brewing?

CM: I think about being here right now. I don’t think about down the road too much. There’s been opportunities that have been presented, but I think I’m doing pretty good here and I’m comfortable here. I just want to keep doing what I’m doing. I’ve got a lot of friends here and people in the hop and farming industry that are close friends here. It’s hard to even think about moving down the road. But who knows, I’m just doing it right now, here.

Are there any other breweries within a 50-100 mile radius that you are a fan of?

CM: Well, Ice Harbor Brewing Company and Walla Brewing Company…There’s a new (brewery) going up in Grandview. I wouldn’t say I’m a fan because I haven’t had any of their beers yet. But I think the more the better. Being that we’re out in hop country, it’s bizarre that there aren’t more breweries after Burt Grant’s. There’s Yakima Craft Brewing in Yakima. Those guys are kind of nano. They do small stuff, but they’re doing okay. But definitely Ice Harbor and Walla Walla. 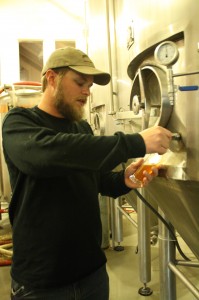 What’s it like brewing in the middle of hop country?

CM: It’s a lot of fun. I’m a spoiled brat. We get lots of experimental hops…which if you want to try this one (walks over to bright tank and pours a new beer)… This is an experimental blonde, actually. Fresh hops, all green hops. I haven’t transferred this one yet. It’s a weird hop. It’s called 644. It’s really sharp and floral. Nobody really knows what the beer is going to act like in a beer. The hop farmers and John I. Hass Company gave them to me and said “Make beer with them.” and I said “Fine.” I’m dry-hopping this one, too. So it’s not completely finished. It’s almost there.

CM: When you let it warm up some, it picks up some…I don’t really even know how to describe it other than floral. It’s like planty, green like chlorophyll. I didn’t even bitter this at all. It’s all in the hopback. This is the magic hopback here (laughs as he points to hopback). Everything just goes in and comes out different. I don’t bitter many of these beers at all. I just put all the boiled beer through the hopback. 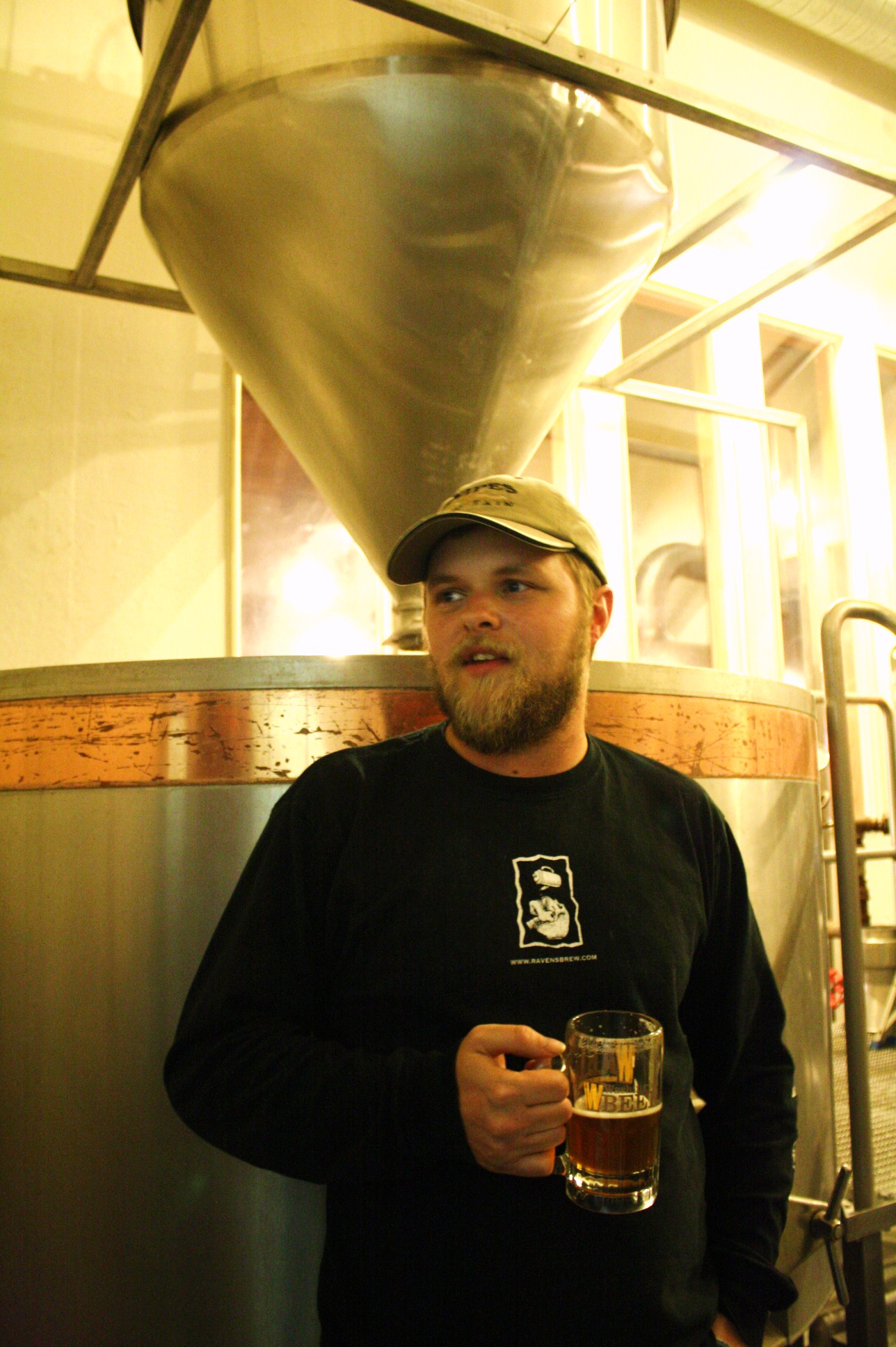 You have an impressive spectrum of beers. Is there anything that you haven’t done yet?

CM: Witbier. I haven’t done a wit yet. I have mild wheat (allergies), so I’m not really that gracing to it. But I was thinking about doing a black wit. Everybody’s doing a black IPA, so I thought of maybe doing a black wit and sneak that into the beer world. But I don’t care. Whatever I feel like making I make. It’s kind of fun. Sometimes I don’t even know what I’m doing until that morning.

How much autonomy do the owners give you in the brewhouse?

CM: It’s like my brewery. I can do whatever. They have other businesses and just want good beer and they found the guy. I’ll do what I want as long as we can sell the beer. The double IPA was a little sluggish because it’s like 9%.

Of all the beers that you produce, what’s your go to beer after a long day in the brewhouse?

CM: Usually th IPA and the hoppier pale ales as well. It depends on my mood. There’s a different beer for every mood, I think personally.

What should people know about Snipes Mountain that they might not know?

CM: Come on out, check it out. We aren’t as far out as we’d like to be. We can only keep up with the locals. Come check it out. I’m usually here.