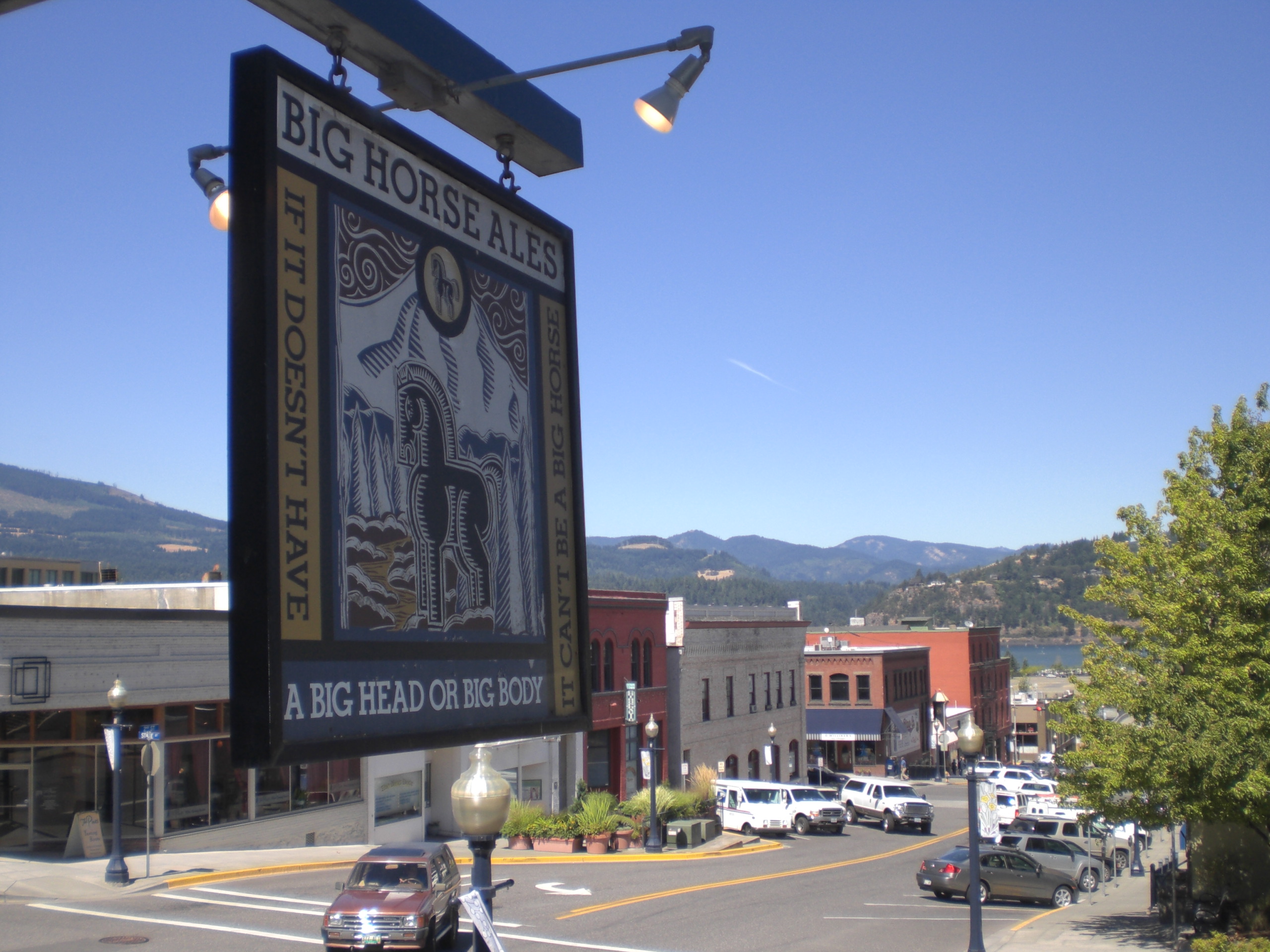 In the picturesque town of Hood River, Oregon lie three breweries; Full Sail, Double Mountain and the sometimes forgotten about Big Horse. Big Horse started as a restaurant dubbed Horsefeathers and after a few years of being open, the brewery was born and named Big Horse. Having started as a four-barrel system 22 years ago, it has remained that size to this date. Big Horse has an annual capacity of about 350 barrels. While this can be a challenge at times, according to brewer Jason Kahler, he says that as demand increases, the amount of seasonal beers decrease because he just can’t keep up. Jason stated “I try to maintain nine taps, although in the busy summer months it can drop off to five or six with guest taps. One thing you can always count on is the house beers being fresh.”

Kahler has been brewing at Big Horse for over four years and has quite the brewing background. He started as a homebrewer, which led to a position brewing for Fitger’s Brewhouse in Duluth, MN. From there he attended the Seibel Institute in Chicago and moved to Hood River in 2000 to brew for Full Sail. Soon after he was hired on at Walking Man in Stevenson, WA before returning to Hood River to take his current position at Big Horse. Other notable brewers of Big Horse include Craig Nichols of Roots, Tom Nimms of Pyramid, Greg Doss of Wyeast Laboratory and Randy Orzeck Big Horse owner.

With fresh hop beers in season Jason indicated that they are one of his favorite. “This time of year is my

Christmas.” he said.  “I’ll make 2 or 3 trips to Yakima every harvest for fresh hops. Vernon the Rabbit Slayer DIPA is probably the most popular beer I brew annually.” Jason still being an avid homebrewer, indicated that “at home however, sours are what I really enjoy brewing. I’ve got quite a collection of funked up kegs and carboys scattered around the homestead.”

From Big Horse’s scenic hilltop perch, the smallest of the three city breweries doesn’t deter Kahler’s ambitions in brewing. “Having three breweries within a few blocks of each other is pretty cool. It’s fun when all three of us are boiling wort at the same time. Downtown Hood River can get pretty aromatic.” As Kahler explains “Big Horse fills the pub beer slot in town. While Full Sail and Double Mountain are available in a lot of markets, Big Horse beers are only available in house only.” He also believes that “Hood River has something for every beer lover. The size of Full Sail and Double Mountain are quite large by comparison. Full Sail produces more beer in 8 hrs than I do in a year. That aside we all have different brewing styles.”

Despite its small size, Big Horse brewing continually produces some of Oregon’s finest handcrafted brews. This

is largely due to Kahler’s passion and dedication to his trade. Many brewer’s take a hands-off approach to brewing once they reach a certain level of success but with Kahler, he is happy and humbled by his immediate involved in the Hood River craft brewing community. “(It’s) Amazing!” he said. “Not only can (Hood River) boast more breweries per capita, but the homebrew scene is top notch. Our local club B.O.G. (Brewers of the Gorge) puts out some amazing beers. Wyeast Labratory is here as well.” 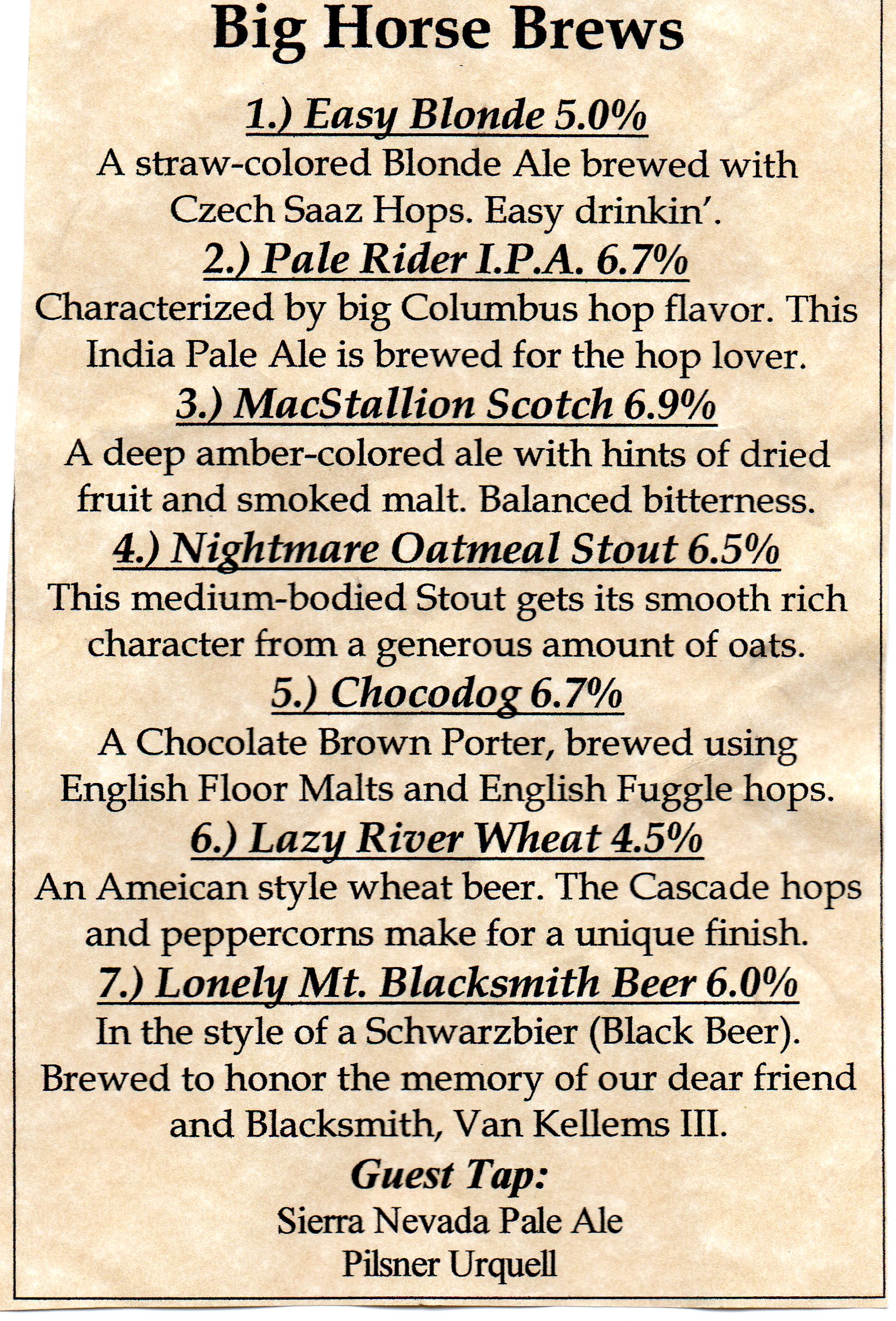 Mark you calendars for Hood River’s Fresh Hops Fest Sat. Oct. 3rd. A good time will be had by all!

Also, Big Horse will feature a rare Portland keg of one of their great brews at Brewpublic’s KillerBeerFest at Bailey’s Taproom on October 10th.