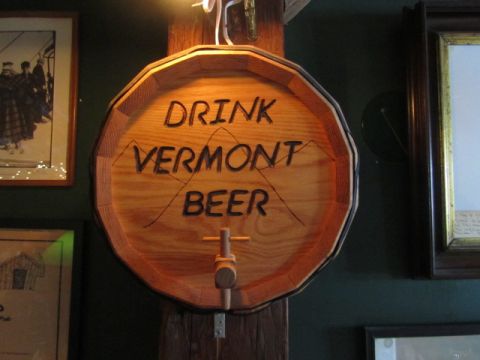 Upon recently arriving in my native New England, I landed in the beautiful state of Vermont to visit friends before traipsing about the region in pursuit of old friends and new and innovative brews. My first few days found me in the capital town, Montpelier, where my dear foodie friends Jessica and Joshua live. Here, I embarked upon a few noteworthy beer hot spots where, like much of the Pacific Northwest, delicious treats were found. Here’s a look at what I did find:

The Shed Restaurant & Brewery – a cozy lodge in the hills of Stowe, Vermont, The Shed offers skiers, boarders and mountaineers alike with a flavorsome assortment of hand crafted beer Jim Conroy. The bearded Conroy is at the helm of the operation’s 7-barrel brewhouse that offers a handsome variety of brews on a sampler trays made from portions of old skis. On the tray we discovered: 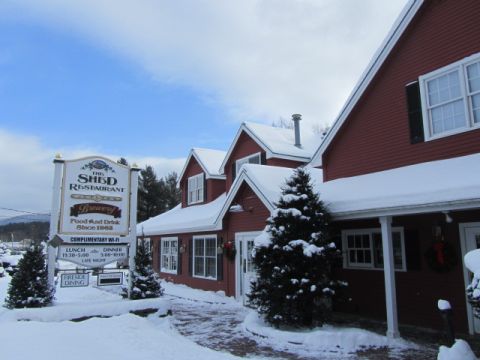 West Branch Golden – an American pale ale named for the cold and bubbly river nearby is produced with kiln-dried malts that result in a glowing golden-colored body, putting forth exceptional drinkability. This 3.9% ABV ale offers a smooth taste with a bright aroma cereal malts.

Shed Amber Ale – This reddish hued ale exhibits a play of balanced malts and hops and the aroma of citrusy Cascade hops. It satisfies with the quaffability of the aforementioned golden ale yet enough body nearly as forward as a brown ale. 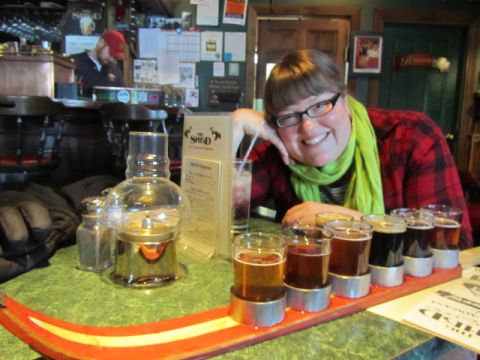 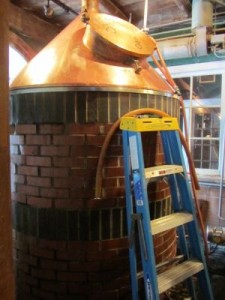 National IPA – At 6% ABV, this brew named for one of the famous “front four” trails on Mt. Mansfield, this English-style India pale ale offers a beefed up hops profile indicative of grapefruit and pine. Not as aggressive as many Northwest IPAs, the National is both bitter and malty with relaxing and approachable charisma.

Stormbringer Stout – this bold and robust stout sates the palate of those in from the wintry world outside with a bite of piquant bittering hops and a coat of thick roasty malts. This brew was the current offering in The Shed’s rotating stout/porter tap and was a top pick by on this chilly day. 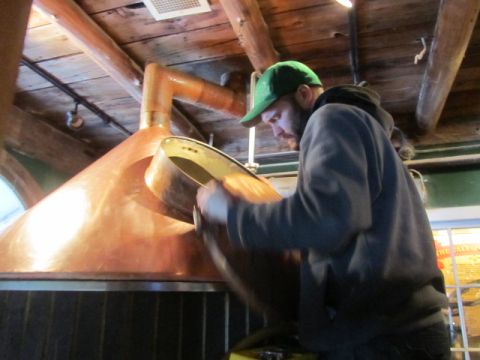 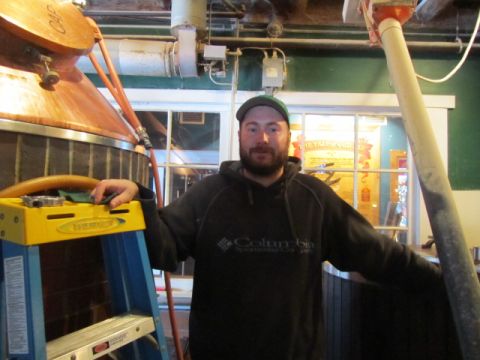 Mountain Ale – A true winter warmer, this beer received accolades by being named the #1 brew in Ski Magazine. An English-style old ale, the Mountain is a dark soothing recipe that combined the perfect balance of hops and malts and its brown-chestnut body revealed a subtle, dry finish. 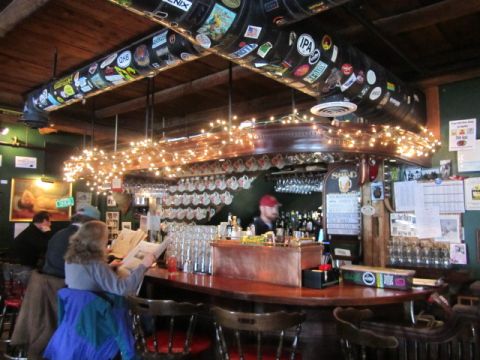 Bold As Love – This mealy Cascadian Dark Ale offers that special “it” quality of many fine blackened IPAs with a bright citrus and pine hop profile and a twang of mildly roasty dehusked malts. It’s great to see that such a beer is currently being produced in Vermont, where many argue that the style originated.

The Shed was a great spot to start our day of sampling with an intimate woodsy environment where patrons find themselves in close proximity to the steaming brew kettle that warms the room and beckons follow-up tastes of many of their choice offerings. 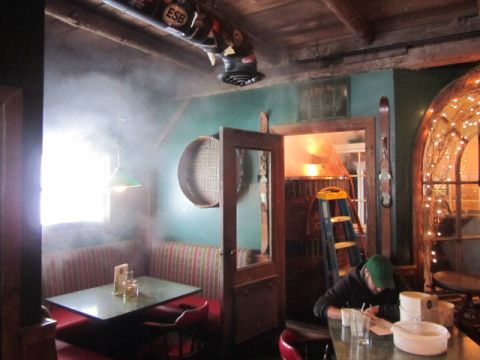 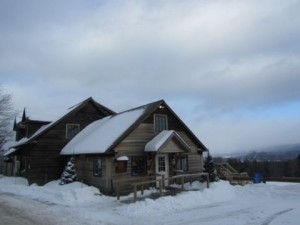 After our stint at The Shed, we mosied up the mountain to a standout local for artisan brews. The Trapp Family Lodge has been featured previously in the virtual pages of Brewpublic. Correspondents Marc Demeule of Quebec and my mother Jean De Ieso reported of this historic lodge. Offering top notch views of the rolling snow covered hills below, The Trapp Family Lodge is situated on 2400 acres of majestic Vermont real estate. A family tradition that began here by the Trapp family of Austria is dedicated to putting forth true to style lagers found in their ancestor’s homeland. The dream was realized after the Trapps escaped the rule of the Nazis and established the current getaway in the 1950s. In addition to spectacular beer, the Trapp offers a range of handmade meals and desserts in their alluring delicatessen. 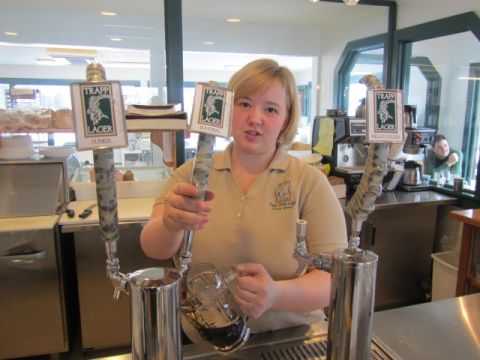 Three distinctly different lagers were available upon my visit to The Trapp: 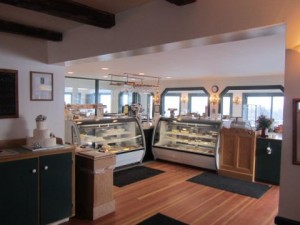 Golden Helles Lager – A light and refreshing lager that places emphasis on the malt bill also adds a touch of grassy hops to balance out a seemingly perfect brew. A wet, grainy offering, the Helles is a goodly pale bright golden color with a dense white head suitable for any season.

Dunkles Lager – With an approachable 4.7% ABV, this is a slam dunkles for those who appreciate traditionally constructed Austrian lagerbiers. Served in a fitting dimpled mug, the Dunkles possesses a clear amber body and frothy whitish head with the benchmark of an assertive yet luring Munich maltiness. Notes of chocolate, ripe bananas and fruity nutcake shine as the brew warms through each additional sip. 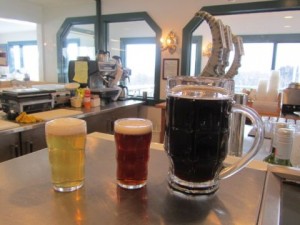 Trostenbier – This unique seasonal offering is quite unique. In some ways similar to a traditional Bavarian schwarzbier (black lager), the Trostenbier, a brown-black filling brew with a welcoming one-finger off-white head was our choice of the day. Sweet malty graininess dominated the palate and was accented by a touch of peaty malts. At 5.6% ABV, the Trosten was very approachable yet ultimately suitable for the frosty conditions outdoors.

After divulging in these three choice beers along with a slice of Linzertore , a cake-like delicacy made with spiced walnut crust and filled with raspberries and red currant jam, and drizzled with raspberry sauce, we were invited to visit the kind brewers in the underbelly of the deli. Here we discovered one of the most immaculate brewhouses on the planet. Lead brewer Allen Van Anda and assistant Jamie Griffith gave us a tour of the facility. 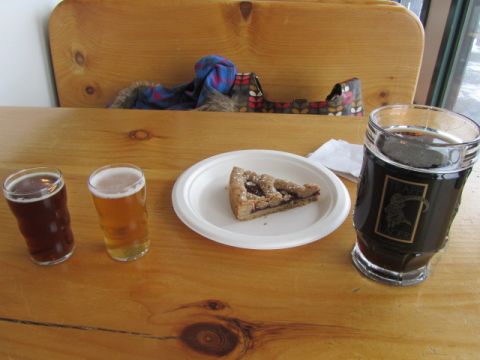 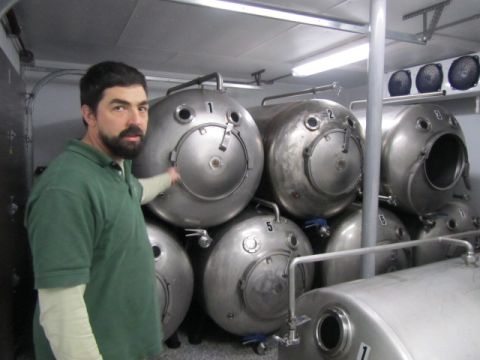 Still fermenting in tanks, was a special 9% ABV Samisclaus winter beer. I will certainly have to return at a later date to dive into this promising and unabashedly bold brew. 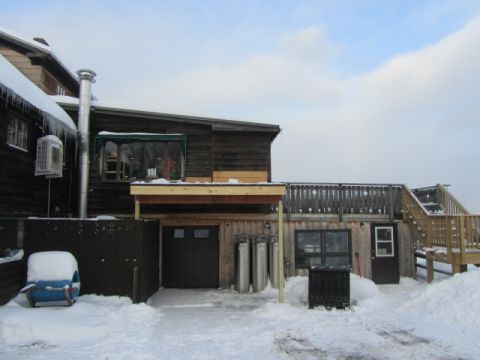 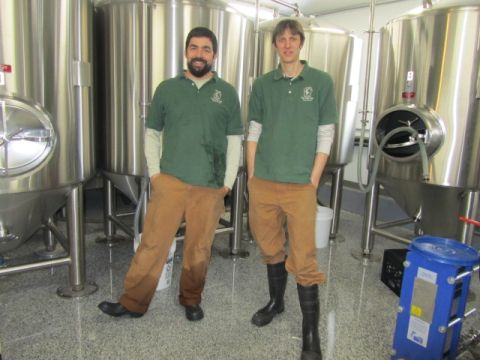 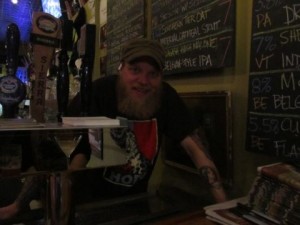 For over two years, my Vermont friends have been raving about a relatively new establishment that quenches the thirst of Montpelier locals and beer lovers from around New England. The Three Penny Taproom (TPT) houses 22 rotating taps of unparalleled craft beer offerings. Anything from snappy lagers to emboldened stouts to citrusy IPAs to quirky barrel-aged wild ales can be found in this downtown pub. 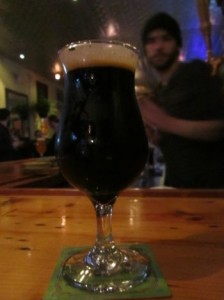 Owners Matt, Scott, and Wes have an obvious passion for their trade with some brewing knowledge to support it. Set upon the crosshairs of State and Main Streets, TPT is unquestionably one of the best beer houses I’ve ever set foot inside. Highlights on this particular evening included draughts of Allagash Hugh Malone hoppy Belgian-style ale, a special house IPA brewed at the aforementioned Shed Restaurant & Brewery, Cisco Wild Wood barrel-aged and blended dark wild ale, and a citra IPA brewed by the new and highly touted Hill Farmstead Brewery of Greensboro. 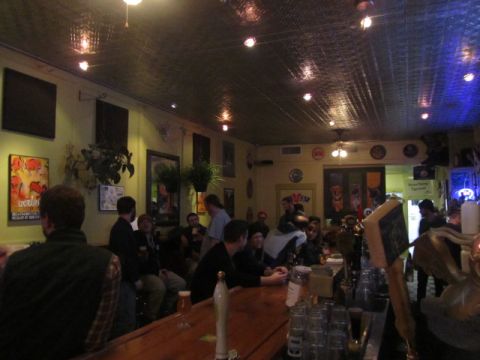 On my last day in Vermont, I paid a visit to one of the most respected establishments for beer in the Green Mountain State. Burlington’s American Flatbread Hearth. Here, the M.O. is to “work daily toward the apex of artisanal flatbread and hand-crafted beer.” And, let me say, mission accomplished. In addition to some of the best wood-fired pizzas found on God’s green earth, American Flatbread offers both exceptional house-made craft ales and lagers as well as a mouthwatering assortment of guest taps 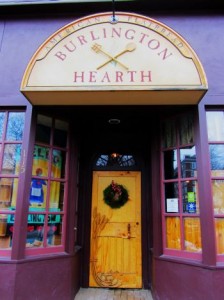 from across American and Europe. Roughly a dozen in-house produced beers offered a wide range of styles including Smokey the Beer Rauch Bambergian Lager, Narconaut Cascadian Dark Ale, and Cornocopia Spiced Squash Harvest Ale. Located in the heart of beautiful Burlington near Lake Champlain, it’s easy to see why Ratebeer ranks this place among the top ten brewpubs on the planet. We’ve been hearing about a new chapter of this business opening in Portland, Oregon’s Pearl District, and we hope it comes to fruition. 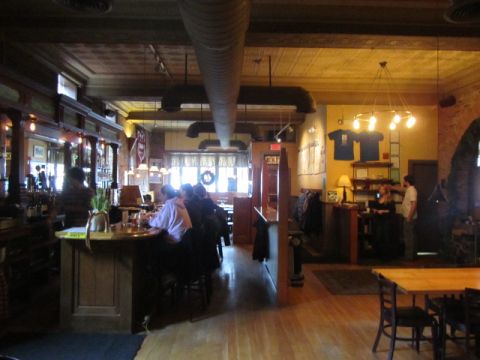 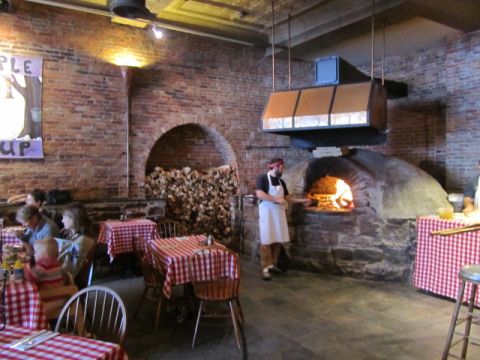 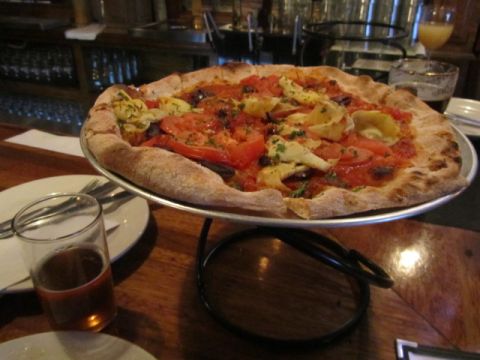 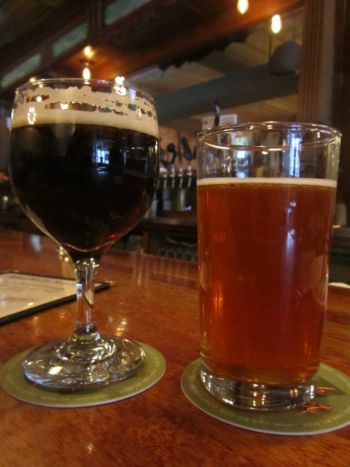 These establishment are just the tip of the iceberg when it comes to stellar brew options in Vermont, and we greatly anticipate returning soon to explore more of this awesome state has to offer.