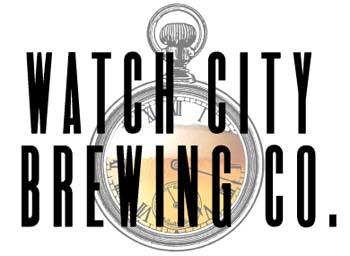 Waltham Massachusetts, just outside of Boston and once known for its manufacturing and major contributions to the American Industrial Revolution, has reinvented itself and returned from the brink. Its downtown, alive with artists’ showrooms, fine dining establishments, a reclaimed  portion of the Charles River, and lovely walkways, is home to Watch City Brewing.

Everywhere in the city are reminders that this was once the home of Waltham Watch Company, where more than 35 million time pieces were manufactured. Now best known for educational institutions like Brandeis University and Bentley University, Watch City Brewing has found its place right smack in the center of the city. 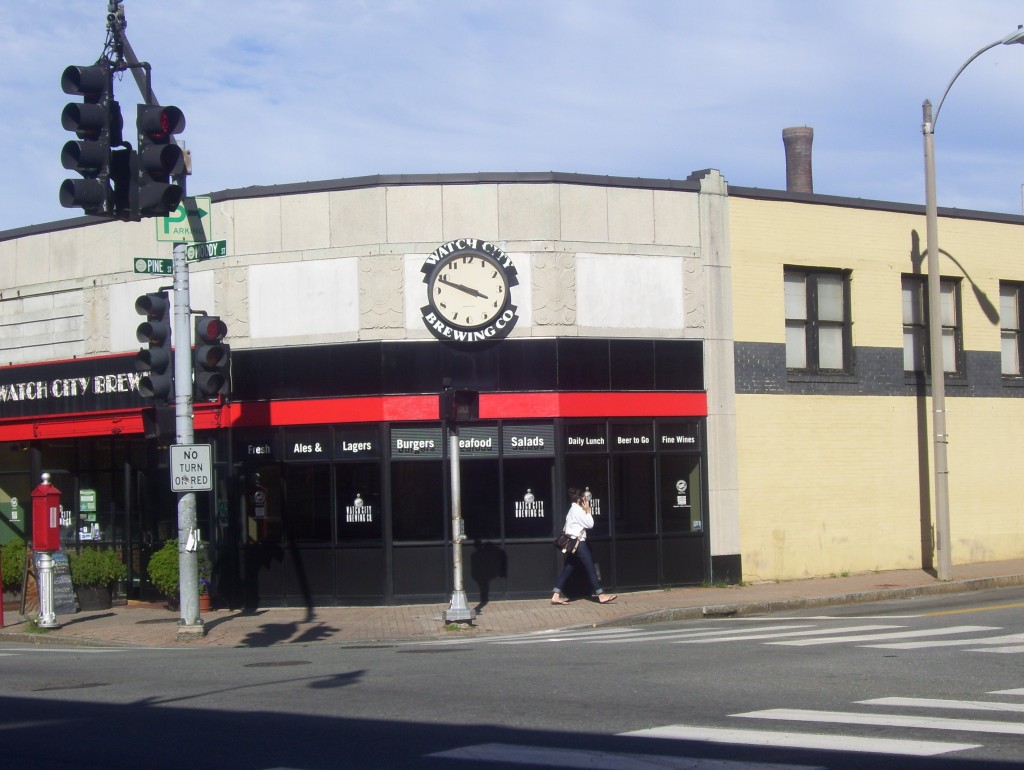 Upon arriving at the brew pub on a late summer Sunday afternoon, we were seated in the bar with a clear view of a television broadcasting the New England Patriots season opener. My companion’s beverage of choice was the Bitchlöden Wheat Lager , Watch City’s summer offering, a dry, crisp bottom-fermented brew, enhanced slightly with Indian Spices…very light and sessionable. Very delicious! Mine was the Fuzzy Logic, a beer that Watch City contract brews for Portico Brewing of Boston. This light ale is a take on the Kölsch style, a traditional German beer. This slightly citrusy and sweet malty beverage with only a hint of bitterness made it the perfect beer for a late summer day. Portico has been developing styles such as a French Farmhouse Ale called Saison Charrett and a Sour Wit with Raspberries known as Rendition. The brewery anticipates opening its own establishment in Boston in the summer of 2013 if all goes as planned.

Our lunch choices were the “Tick Tock Beer Battered Burger” and the beer battered fish sandwich. Both were delicious and perfectly prepared. 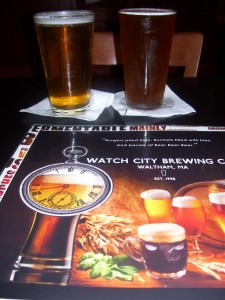 We found other specialty brews on tap at Watch City that will likely pique the interest of craft beer enthusiasts. These included their Bee-Jezus Belgian Gruit, a strong Belgian pale ale base beer without hops. Instead of the standard lupulin hops spice, Bee-Jezus makes use of homegrown Bee Balm and Lemon Balm as well as locally source Jasmine Green Tea. These herbs and botanicals compliment the spicy Belgian yeast with the result being a refreshingly subdued citrus and pepper flavor that melds nicely with this style of beer. Also on tap at the Watch City was their Clocktoberfest Lager. Not only one of the best pun names for a fall German Märzen-style brew, the beer is a local take on this fall harvest seasonal. Deep amber-orange hued with Vienna and caramel maltiness, yet assertively crisp, like you’d expect in a traditional Oktoberfest beer. 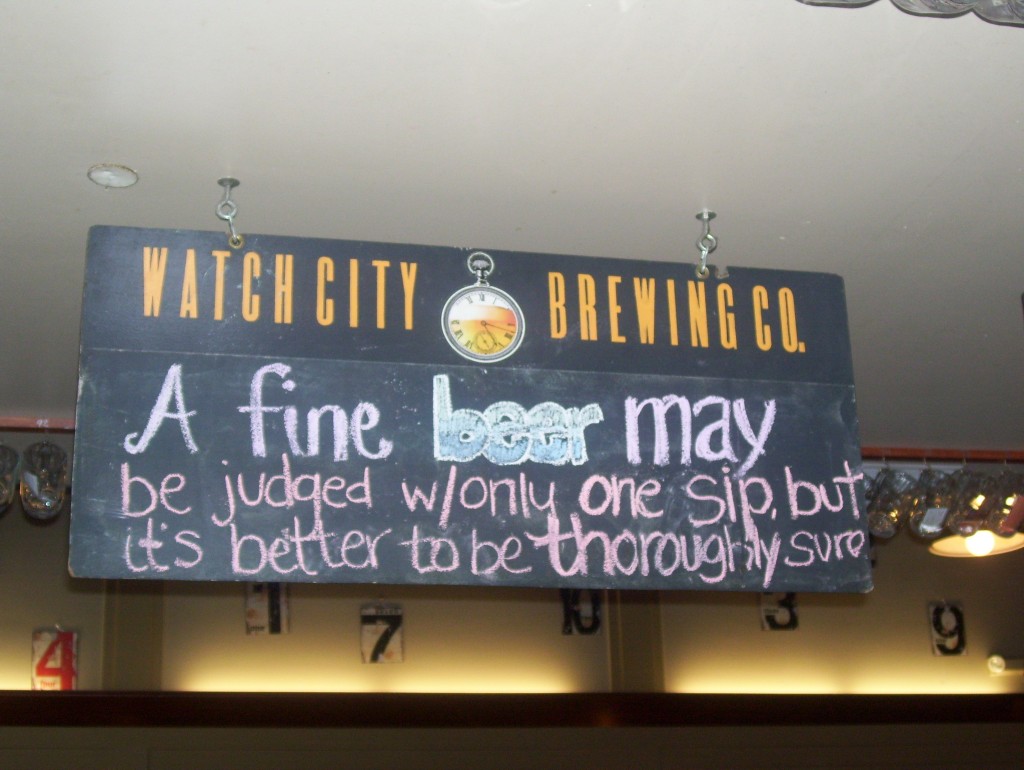 I have to admit that I was a bit disappointed that there was no pumpkin ale available, but now I have an excuse to return later in the season. This place helped make for a perfect Sunday afternoon, and of course, the Patriots won the game.

Hope to see you all soon in downtown Waltham. We can meet at Watch City Brew Pub for sure! 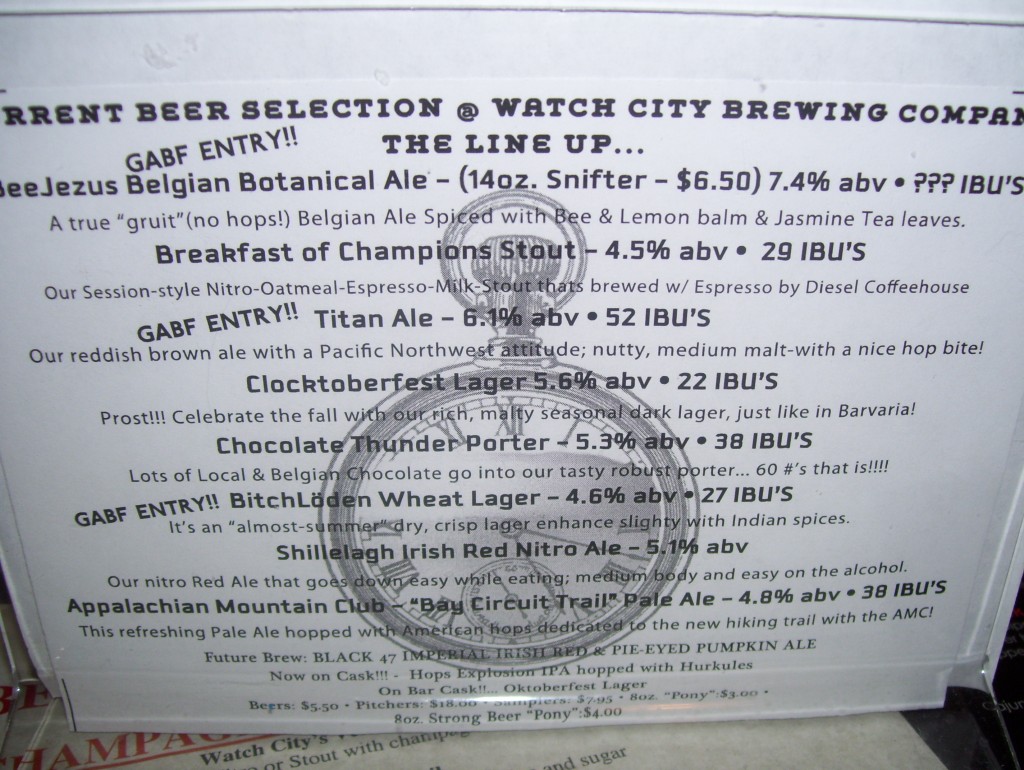 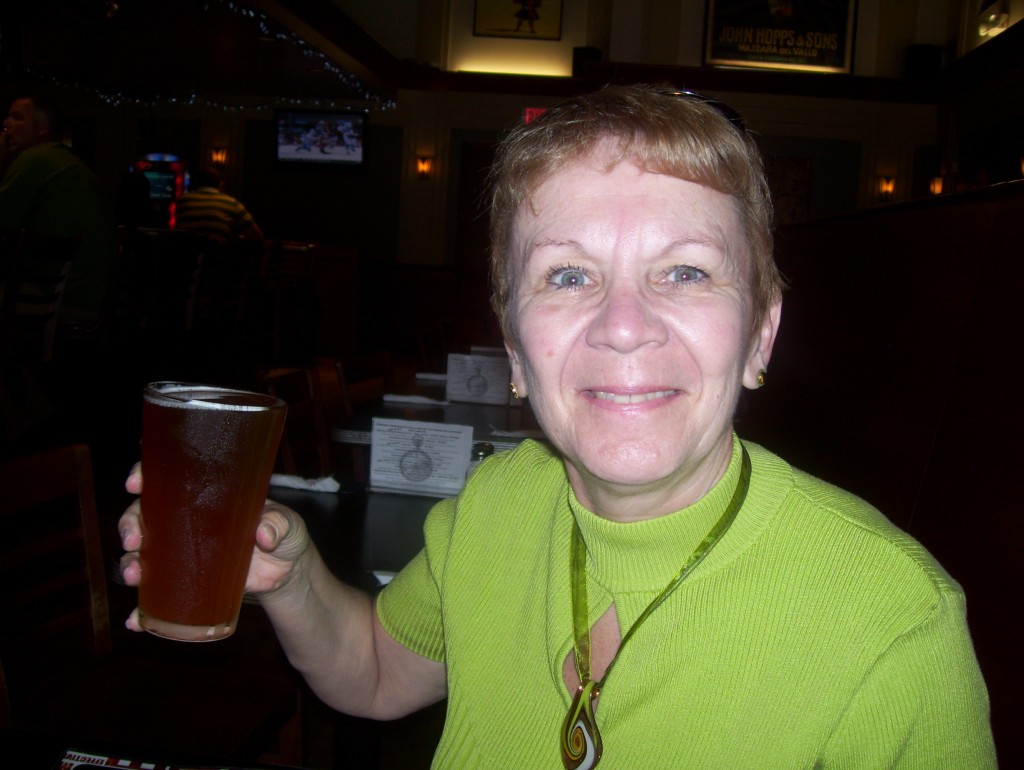 Jean De Ieso was born and raised in her hometown of Worcester, MA where she enjoys seeking out sessionable ales and lagers as well as her favorite style, the fall seasonal pumpkin beer.