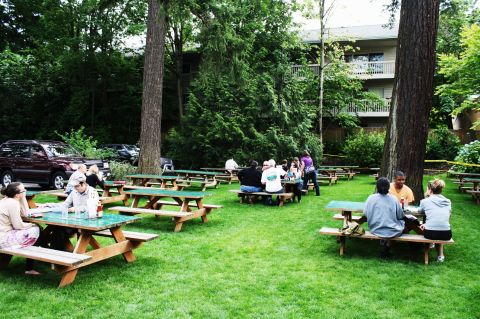 In Beervana, the weekend weather may have not felt like a lead-up to summer, but as far as the beer was concerned, we really couldn’t have ask for any better. Though today, Monday the 21st, marks the actual first day of summer, and the longest day of the year, Saturday June 19 marked the day for Cascade Brewing’s Summer Solstice Celebration at the Raccoon Lodge. This family friendly event was a multifaceted affair, featuring all four of the brewery’s revival brews, and was wittily dubbed “The Four Goses of the Apuckerlypse.” On the serene Douglas-fir laden beer garden, the barbecue crackled and many a tasty beer was poured including a special cask of Cascade’s floral Summit and Chinook-hopped Summer Solstice IPA and the latest version of The Vine, a special blend of their Triple, Blonde Quad, and Golden ales that have been re-fermented with the fresh pressed juice of white wine grapes. Spending more than six months of lactic fermentation and aging in small oak barrels, this beer, as some might remember was a hit at this year’s Fred Fest at Hair of the Dog Brewing. 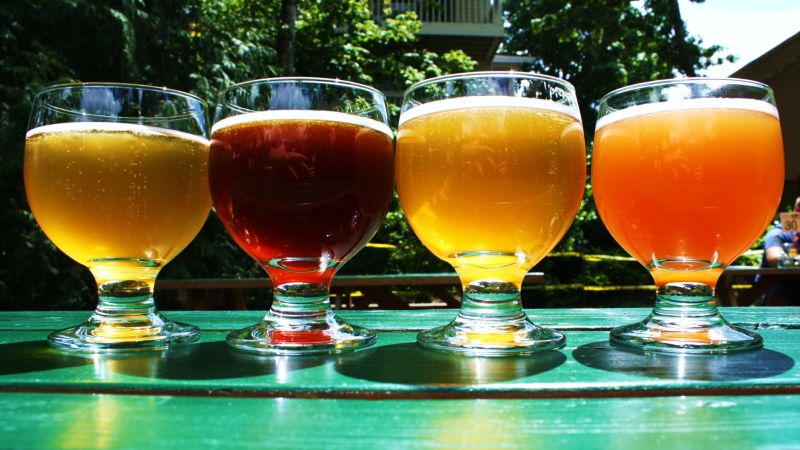 After ordering up a flight of the Four Goses, we joined Brewmaster Ron Gansberg and Curtis Bain for an always welcomed trip into the brewhouse, where we experiences some more specialty treats. These included a new Brettanomyces brew with cherries known as Beckomyces Asscracky, a young incarnation of the latest Vlad the Imp Aler (rumored to soon be making its way into bottles), and perhaps the highlight of the Cascade tasting experience, a special on-hand barrel blend of a forthcoming The Bourbonic Plague, featuring three different barrel-aged dark ales consisting of dark fruits, and Bourbocide, a mind-tingling oaky delight. 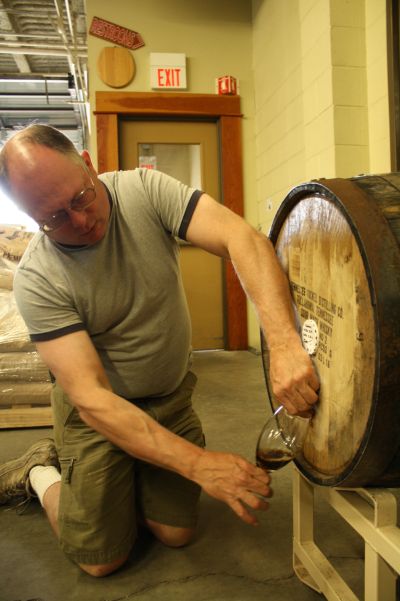 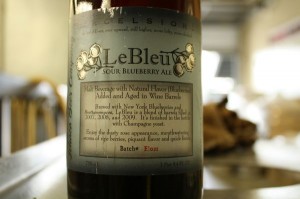 After the blending madness commenced, some bottles were enjoyed. We opened a cellared bottle of Ithaca Brewing’s Excelsior! Le Bleu, a blend of 8 different wine barrels of aged sour beers from 2007, 2008 and 2009 each spiked with 50 pounds of fresh, hand-crushed New York blueberries, then inoculated with Drie Fonteinen Brett yeast and conditioned with champagne yeast. This beer that was a gift from our dear friends Joshua and Buck who currently reside in Upstate New York was quite effervescent a crisp, mildly tart, and poured a pretty garnet hue with a long standing white head. 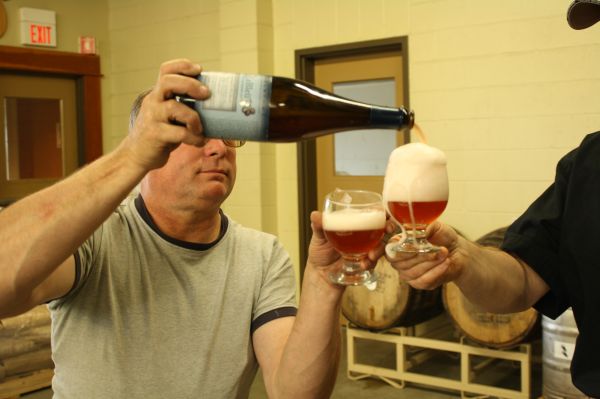 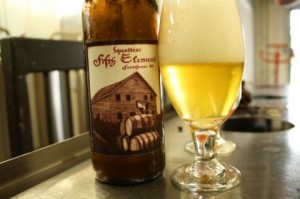 Curtis dug into the cellar and pulled out a treat of his own. From his native state of Utah, he managed to get his hands on a 750ml bottle of Squatters Fifth Element. Brewed December 2007 and laid down to age in oak barrels January 2008. This highly regarded brew poured a straw yellow color with a large toppling white head. It’s commercial description indicates “It has light peach/fruit notes and a beautiful golden hue. High carbonation created during bottle conditioning gives it a champagne like texture on the pallet. It finishes slightly tart and cleansing.” That pretty much sums it up. One of the most refreshing Saisons to pass our palates in some time. 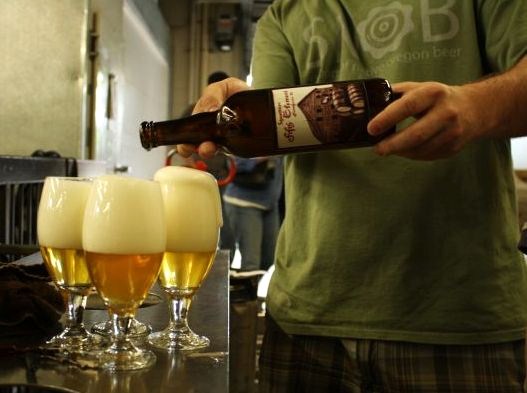 To complete a bottle trilogy, Cascade brewer John Berry, the architect of Cascade’s aforementioned Summer Solstice IPA, went into the coffers and extricated an unmarked champagne bottle filled with last year’s Vlad the Impaler. Named one of Draft Magazine’s top 25 beers of 2009, Vlad also took home a silver medal at last fall’s Great American Beer Festival in the wood and barrel aged beers category (In case you missed the news, the gold medal in this delineation went to none other than the Bourbonic Plague!). Being one of the first souls to experience a side-by-side of the two Vlads was a distinct pleasure. 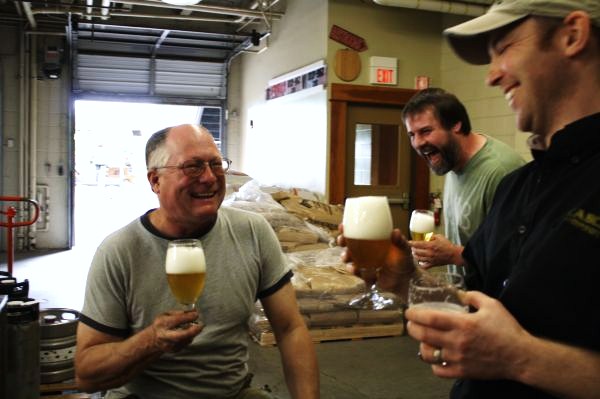 Wood aged Pale Quadruppel. Imagine a blend of Scaldis and Cantillon Pure Kriek. Forget it, there is nothing like it (yet). Vlad is shocking to your sour beer senses and taste buds, which do not understand that such a balanced delicate sour beer can be so drinkable and appeal to so many people while being extreme. But don’t forget, it will still open a can of 10.2% whoop-ass on your ass after all the pomp & circumstance of what an amazing beer it is subsides.

After all the mayhem amidst the cooperage, the late spring sun made a cameo and Gansberg’s bluegrass-folk band, Black Lodge, hit the stage and knocked out some toe tapping tunes that included a slice of Americana and some beloved rock and folk covers. 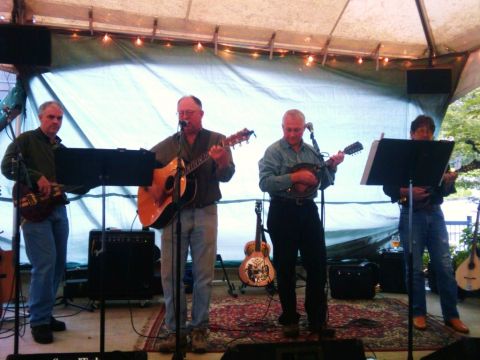 Despite the slow start to the warm season, at least this year, the festivities at the Raccoon Lodge didn’t include rain. Last year’s June 22 Solstice celebration saw folks run for cover and pack under the tent when large drops plopped down.  Warmer, shorter days are on their way…. 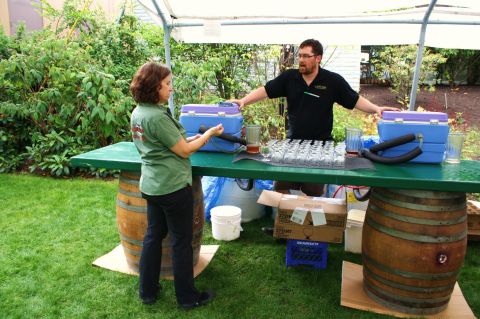