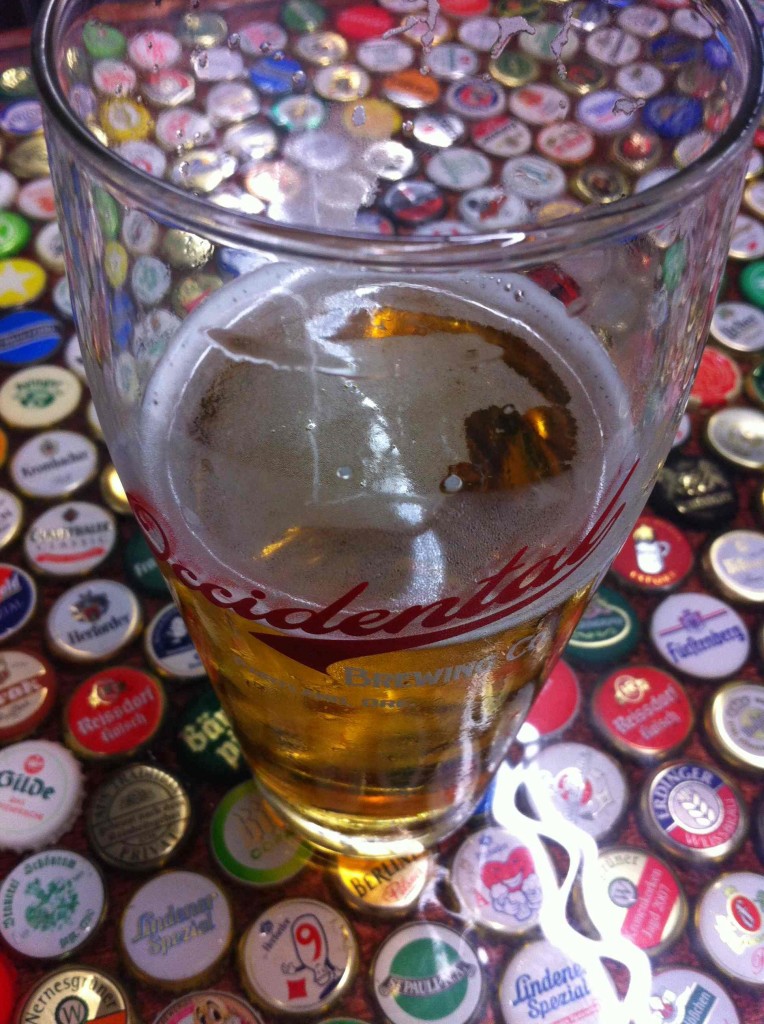 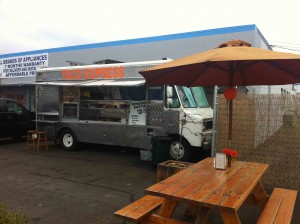 With another President’s Day Weekend now behind us also means another Zwickelmania is also in the books. This year we celebrated the 5th Year of this annual day of Oregon brewery open houses put on by the Oregon Brewers Guild. Last year I traveled to Bend with Brewpublic’s Angelo De Ieso to Zwickel. This year I decided to stay closer to home and take in some breweries across Portland.

Knowing that the day will be a long one of consumption I headed to SE Portland via TriMet to meet up with my Zwickeling companion Snob Ritch. Both of us realized that we needed to get a good food base in us so we met at Taco Express, for a breakfast burrito. Fortunately this excellent taco truck is located across the street from our planned first stop, Gigantic Brewing. 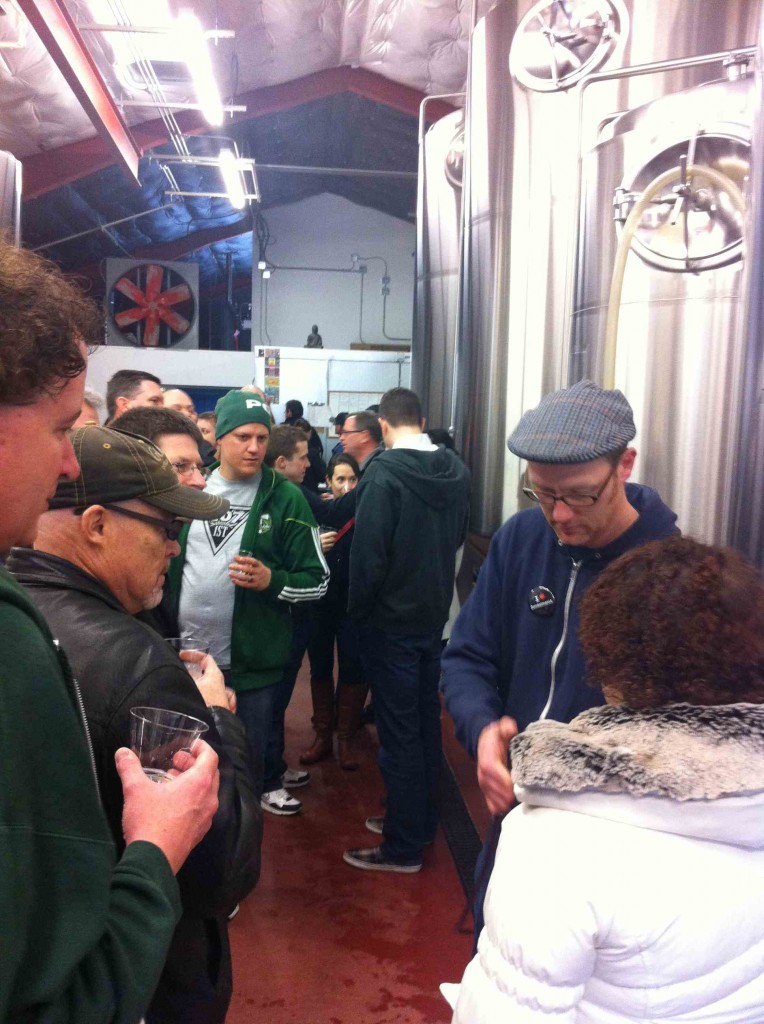 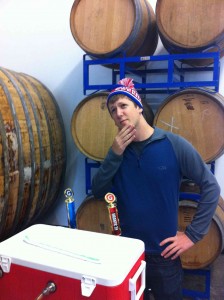 With breakfast burrito in hand we walked over to Gigantic Brewing to eat our warm burritos in their tasting room. From perusing their beer menu we decided to go with their new seasonal release, The Time Traveler, a nice roasty porter that paired quite well with our breakfast burrito. Gigantic brought their A game on Saturday. They had Zwickelers enter the brewery from the rear parking lot. Once inside Joey Bosworth poured samples of their year-round IPA and their Royale: Belgian Pale Ale as free tasters alongside a backdrop of beers aging in wooden barrels. Then Ben Love was roaming the brewery to answer any questions from the masses while Van Havig poured The Time Traveler from the zwickel in the midst of the brewery. From there they shuffled the Zwickelers to the front tasting room to purchase a pint while waiting on the next Brewvana Bus to arrive. 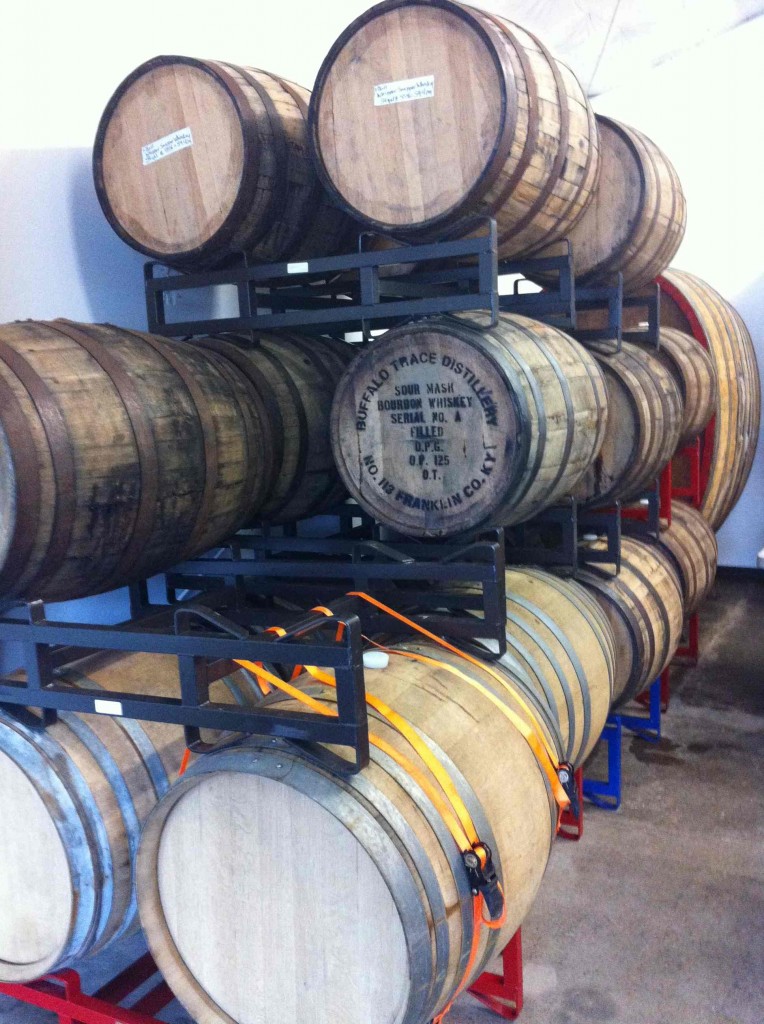 From there we traveled northwest a few blocks to the new Alameda Brewing Co.’s new 20 barrel production brewery. This was my first visit to their new production facility. It’s a fairly large space with a lot of room for growth. One thing I noticed was their very large cooler with one sweet tap handle coming out of the cooler wall. Eric, one of their brewers, provided the sampling here. He was pouring tasters of Klickitat Pale Ale, El Torero IPA, Yellow Wolf Imperial IPA and Black Bear Stout XX. 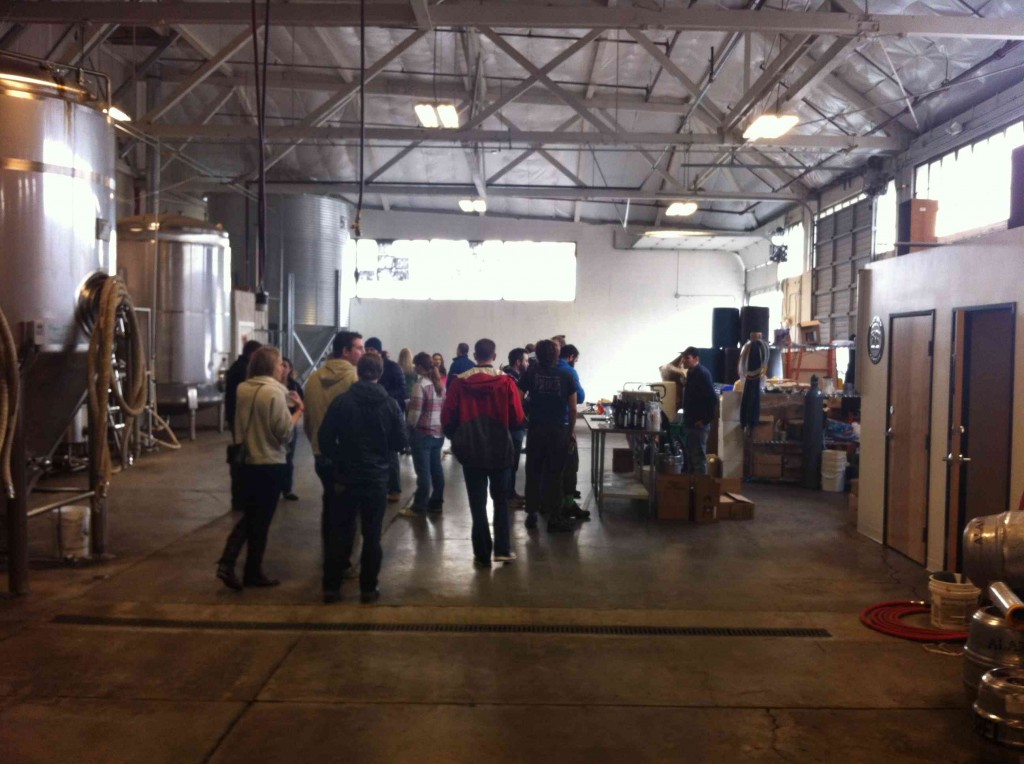 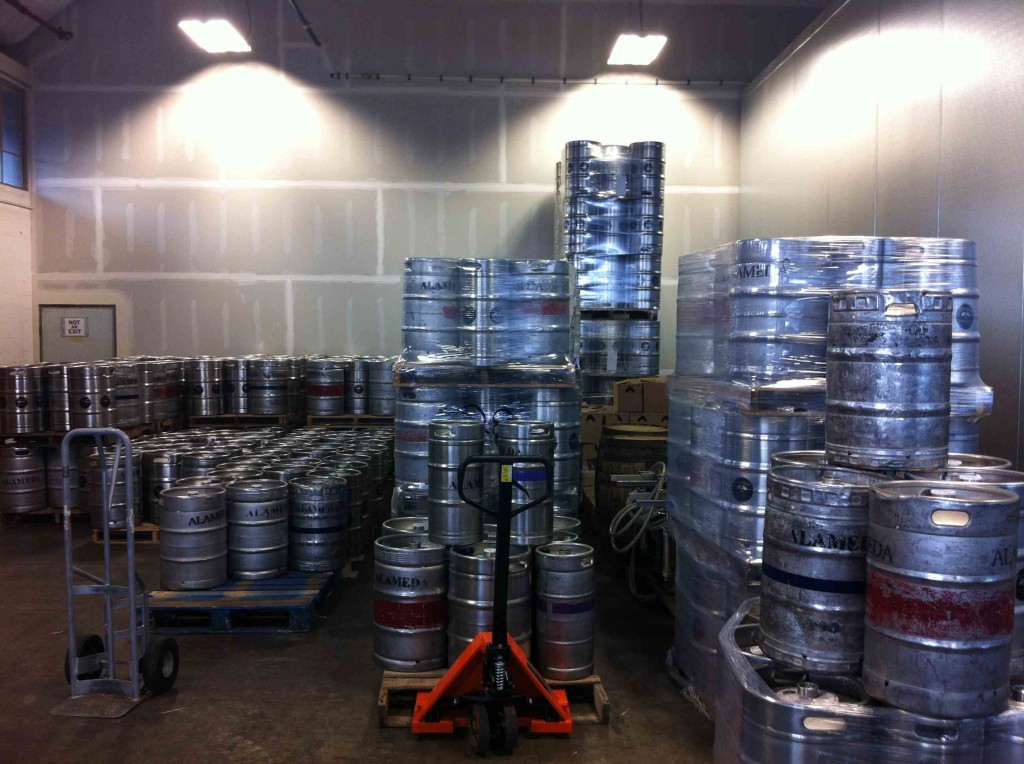 Our third stop was to see the crew at The Commons Brewery. Upon walking up on the sidewalk out front there was the Pretzel Nook serving up fresh warm pretzels from their food truck. Once inside, owner Mike Wright was pouring Holden Dark Rye Farmhouse Ale fresh from the brite tank that was tasting quite well. Next to Mike was Head Brewer, Sean Burke, pouring Urban Farmhouse Ale from the zwickel. Their brewery was bustling with a lot of activity. 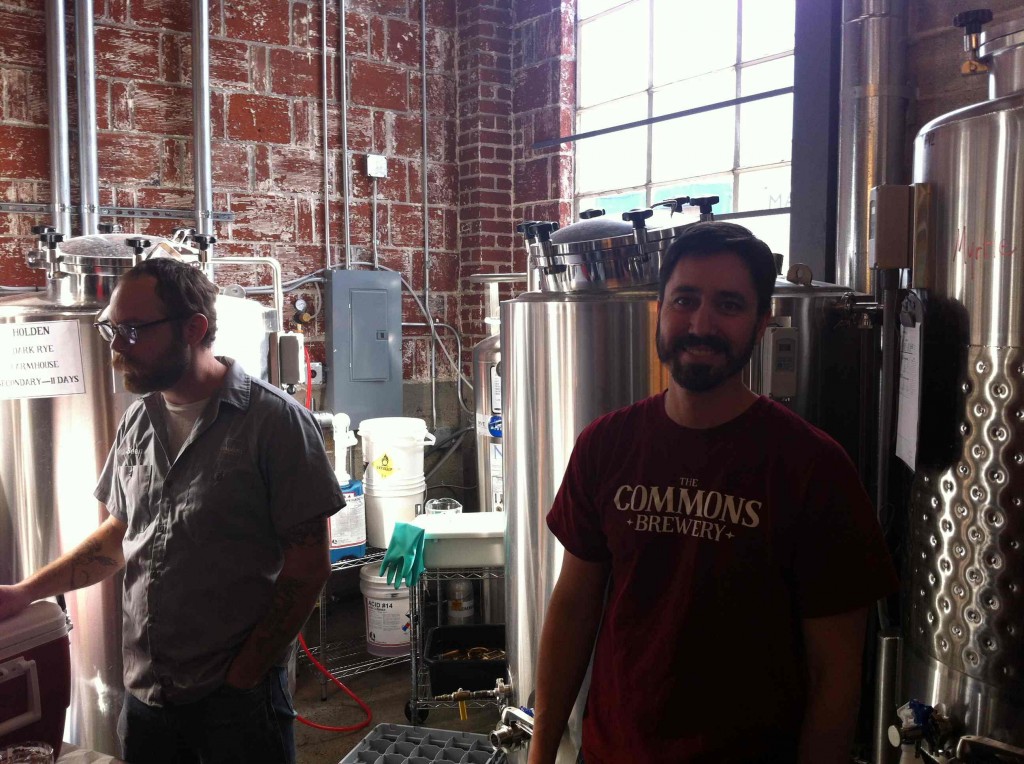 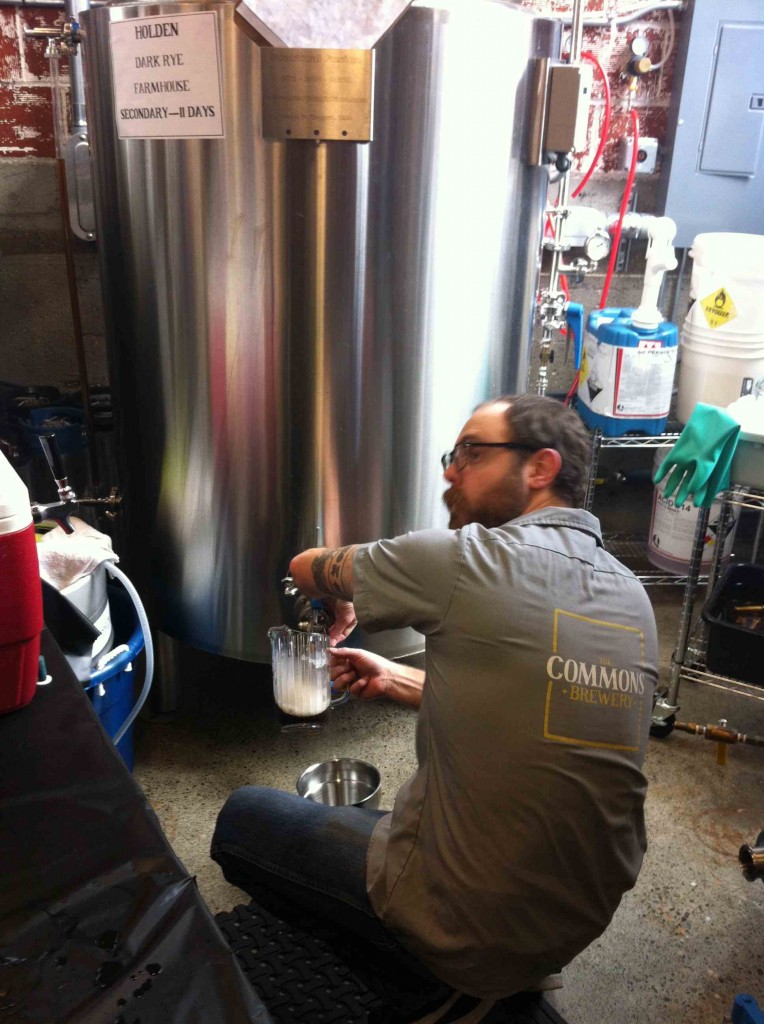 After leaving The Commons we needed to decide on our next stop. Since Snob Ritch hadn’t been to Occidental Brewing we decided to head to the far reaches of North Portland. On the way there we called an audible and decided to veer off to Portland Brewing and their recently re-branded brewery and taproom in Industrial NW Portland. 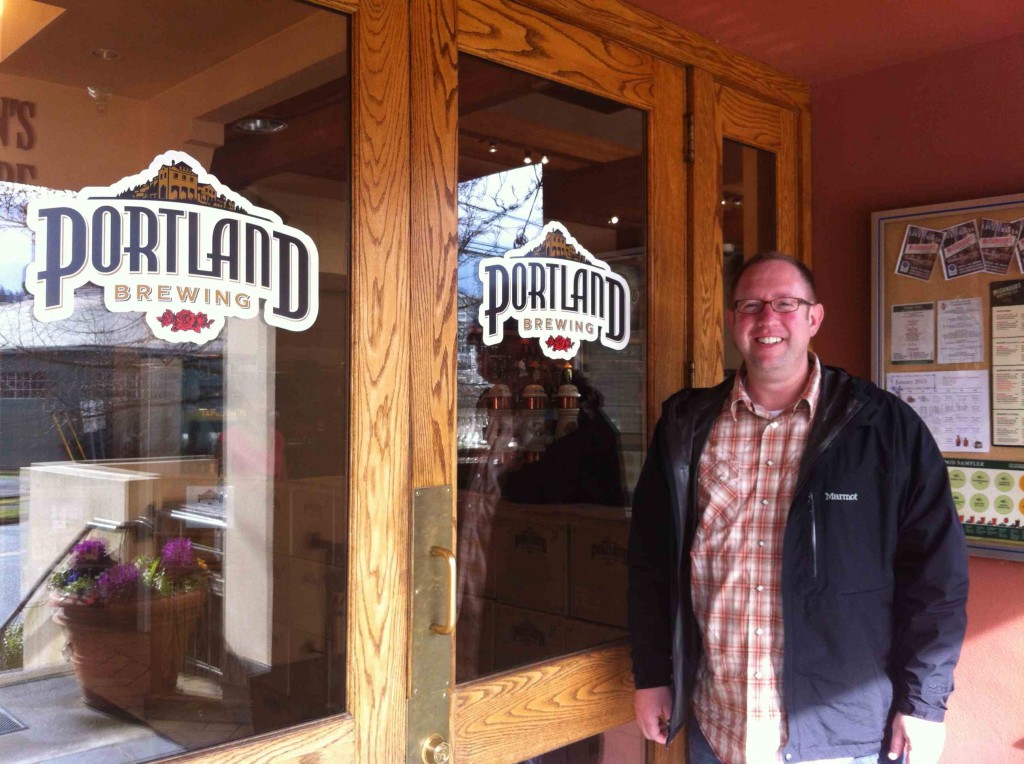 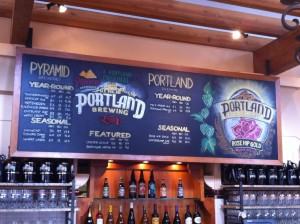 After entering I noticed the re-branded tap handles and signage inside their taproom and pub. There they were pouring samples of their new taproom only Berliner Weisse, the new Portland Brewing IPA, and a few others. The Berliner Weisse was very nice, not too tart which made it very refreshing. A nice one at 4% ABV. The IPA on the other hand may need some slight tweaking if it is to catch on here in Portland. It’s definitely on the milder side, more similar to the classic Bridgeport IPA. Once we downed these two samples we headed to the brewery for a tour led by Head Brewer, Ryan Pappe. In their recent past they have not been offering tours of their brewery except on Zwickelmania, therefore we decided to join in. Ryan offered a fairly comprehensive tour for such a busy day. Once back in the far reaches of the brewery we approached the brite tank area where another one of their brewers, Luke, was pouring fresh beers from the zwickel. Here they offered a very rare barrel aged beer that they’ve been blending to find the correct mix. Once an acceptable blend has been established they hope to have this one on in the pub in the near future. On our way out of the brewery we had a sample of their new Oyster Stout. This beer will be only available on draft throughout the state of Oregon. Definitely search this one out, one of the better oyster stouts that I have tasted. 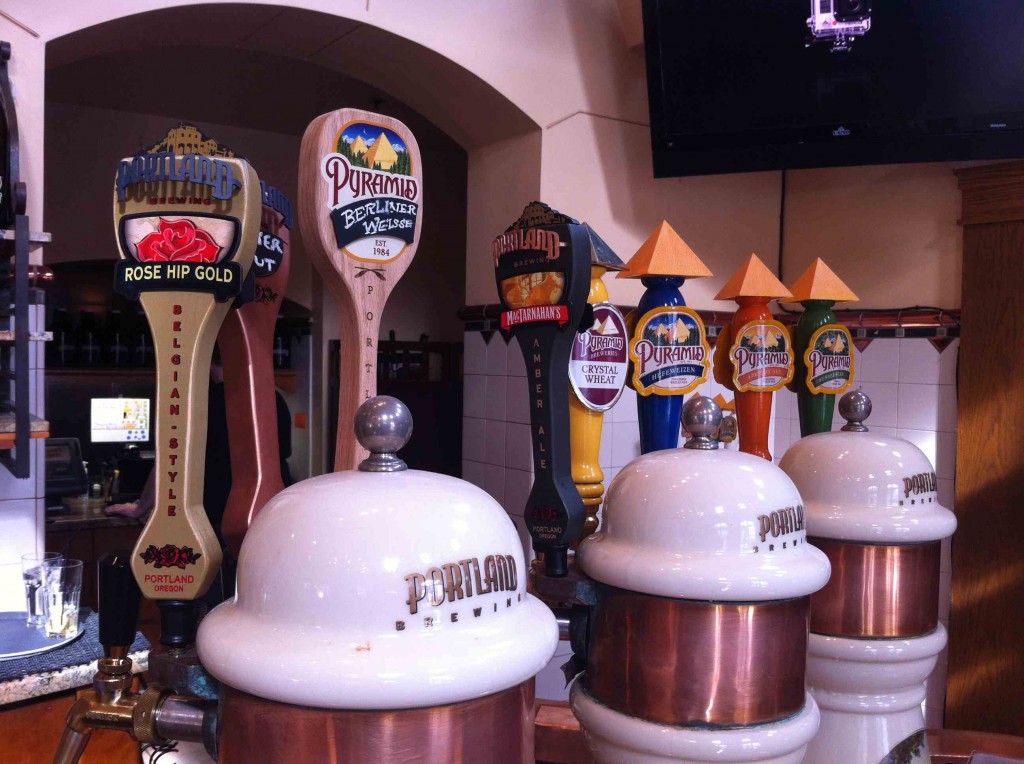 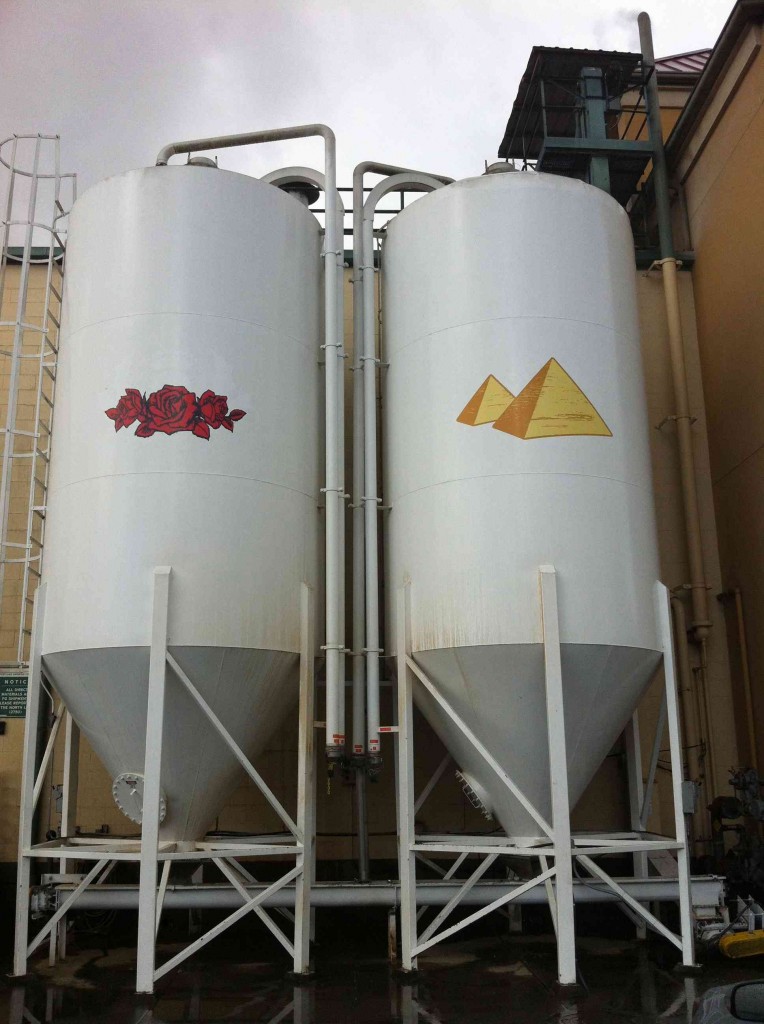 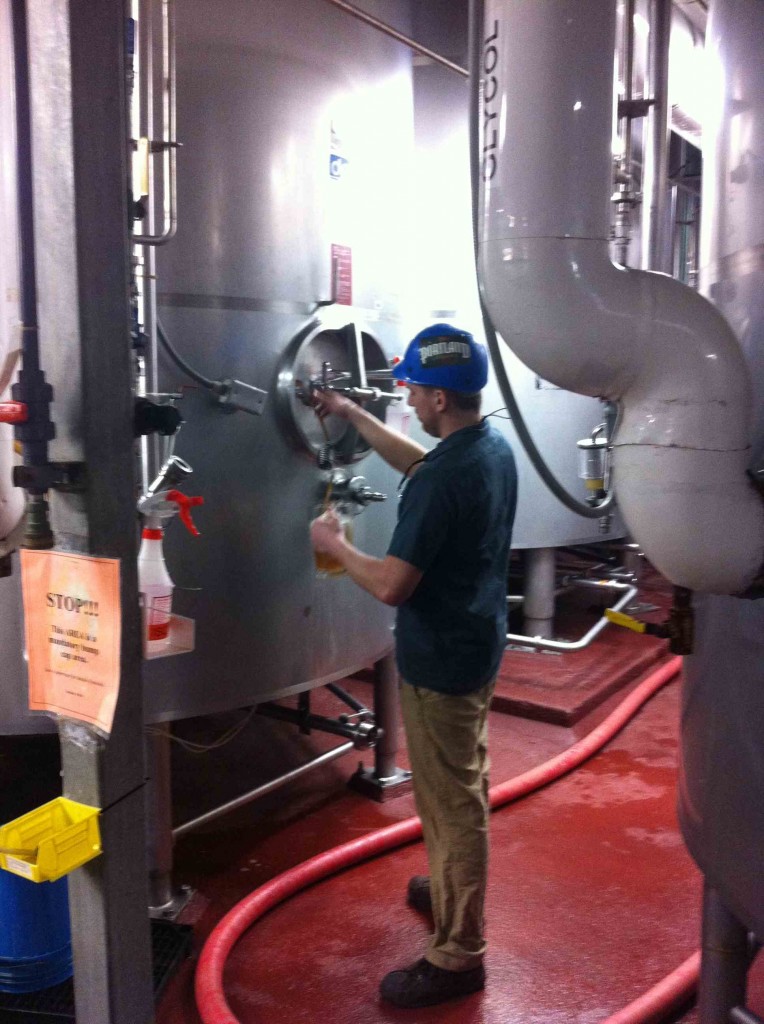 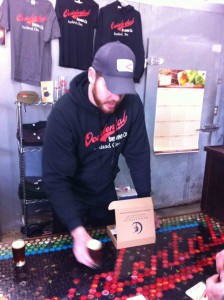 So we then traveled further north and over the St. Johns Bridge to Occidental Brewing. Situated just across from the boat ramp at Cathedral Park is one of Portland’s hidden gems. Once we entered the brewery’s tasting room we were pleasantly greeted by co-owner Ben Engler and his offering of an exceptional beer pairing. What was offered was a pairing of their Dunkel and a very decadent chocolate truffle using their Dunkel in the chocolate from their neighbor across the street, Moonstruck Chocolate. Moonstruck’s chocolatier enjoys coming over to Occidental for a pint and came up with the idea of combing his two delights. This had to be the best presentation of a beer that we encountered all day. While we were devouring this chocolate truffle we heard Dan Engler giving a tour across the brewery. We strolled over there to take that in and ask a few questions. Back in the tasting room we each ordered their crisp, clean Pilsner. 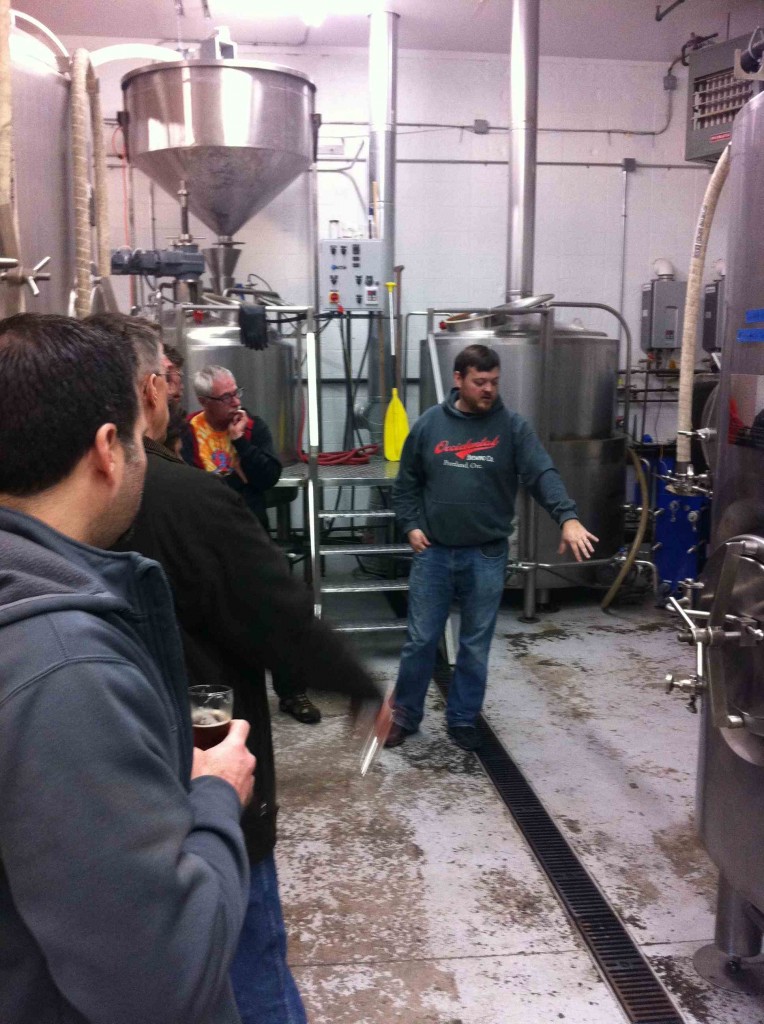 We then realized that time was not on our side with only 40 minutes left of Zwickeling. All packed up we headed to our final and sixth stop of the day, Lompoc Brewing – 5th Quadrant in North Portland. Wandering thru the Sidebar to get to the brewery we crossed paths with Brewmaster Bryan Keilty while he poured samples of Bob’s Memorial Braggot. Further back in the brewery we ran into one of Lompoc’s other brewers, Irena Bierzynski, where she was chatting up with some other Zwickelers. We sampled another beer and then realized it was a bit past 4:00 p.m. and put a close to our 2013 Zwickelmania. 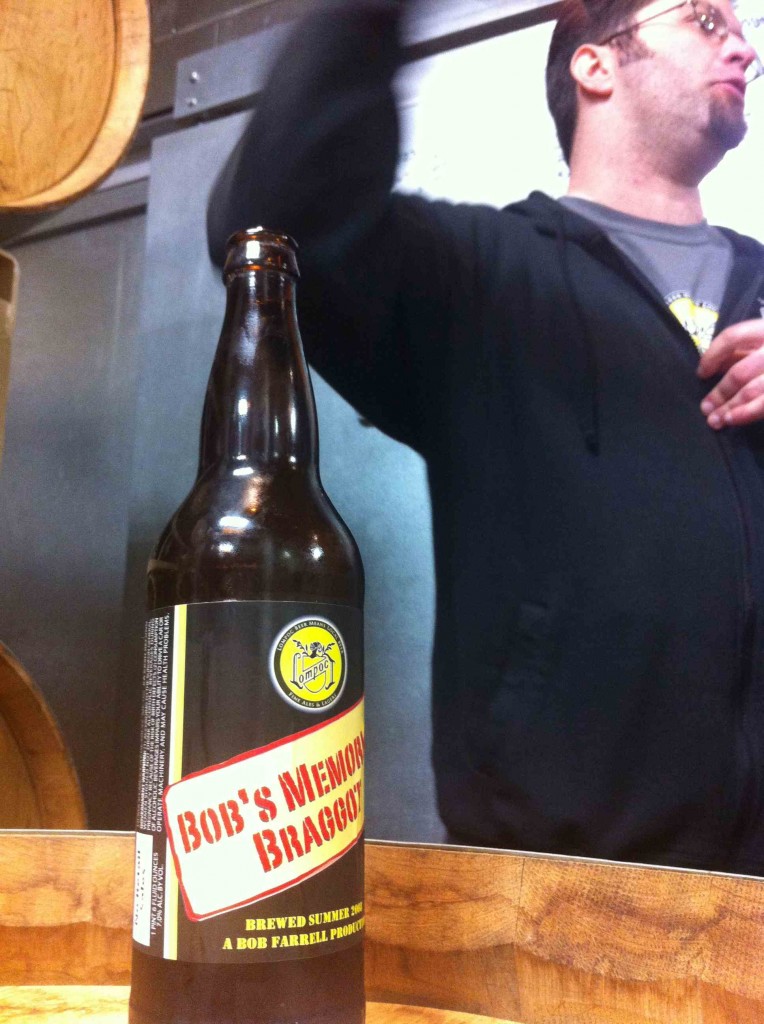 Good times were had throughout the day. For those of you that have not attended any of the Zwickelmania events make sure to check out the festivities next year. Zwickelmania always takes place on the Saturday of President’s Day Weekend, an event that should not be missed.  A perfect reason for a day of imbibing.