Instead of my usual cross-border dash on long weekends, I played tourist in my own hometown of Vancouver, British Columbia this Saturday, visiting a couple of our great taprooms, The Alibi Room and Bitter Tasting Room.

The two locations have quite a bit in common with their hipster chic décor of industrial fixtures and reclaimed wood, foodie menu staples (local chicken undergoes spiritual counseling prior to be brought to your plate), slightly gentrifying neighbours and neighbourhoods, and of course the obvious care and attention lavished on their beer selection. Luckily for beer geeks there are also some key differences, which means you really need to try both places. 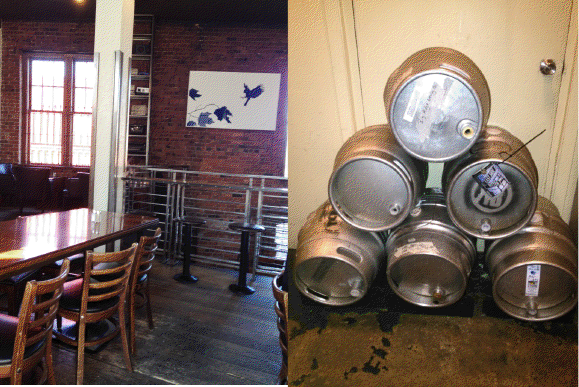 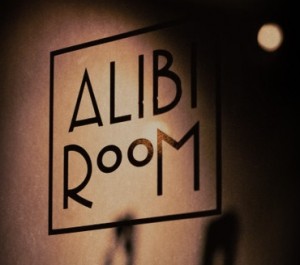 The Alibi Room concentrates on draught beers, presenting an impressive menu of over fifty beers broken down into various styles bolstered by a couple of cask selections. Obviously the focus on is local breweries but a number of American and foreign craft beers can also be sampled. Eleven dollars buys you a flight of four so you can try a variety before committing to any one pint – as every good beer geek knows you gotta do your homework. Alibi Room is bright and spacious with long communal tables that allow you to interact with your best new beer friends aka your tablemates. You can do a little train watching while you drink, and the ‘stick a bird on it’ mentality further ensures hipsters feel comfortable. There is even a bar downstairs to accommodate an extra busy night. Stairs, many stairs, to the bathroom always seems like an inherently bad idea in a place serving alcohol but they present a good challenge after a few rounds of taster trays. 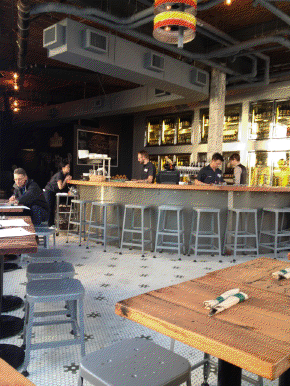 Bitter Tasting Room is a smaller space with a central bar, a cool wall of illuminated fridges and a throw-back speakeasy vibe emphasizing black and white décor, metal fixtures and interesting graphics/fonts everywhere you look. Here the focus is on the bottle with an extensive line-up of brews and half a dozen or so taps for good measure. One really neat menu item is their selection of beer cocktails from the staple shandy, to a beer geek take on the Caesar, to a grown-up version of root beer. You can order flights here as well but they are pre-set selections based on style (mix of draught and bottle). We tried the dark beer trio for eleven dollars. I like the idea of letting the learned bartender set out choices that complement one another. The food menu is not that dissimilar from The Alibi Room but they have
pretzels (!!!), which were obviously invented just to pair with beer. Really nice and informative staff – someone helped me take pictures and our server debated the merits of adding sea salt to stout (I think this is a brilliant idea). Rumour has it that they will be opening a patio onto the side street maybe in time for summer. 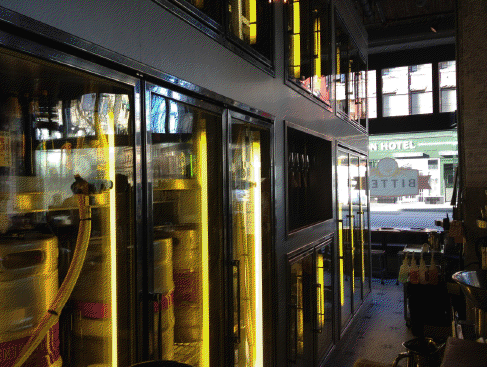 Now on to the Beer…

First, I always try the cask beer at The Alibi Room just because I have to. After the cask brews I pick whatever piques my interest and whatever I haven’t tried before. Sadly, this time out I was really stretching for a beer I liked enough to order by the pint. Out of the twelve samples my favourites were both from Yaletown Brewing Company, the Oud Bruin Flemish Brown Ale and the Raspberry Ale. 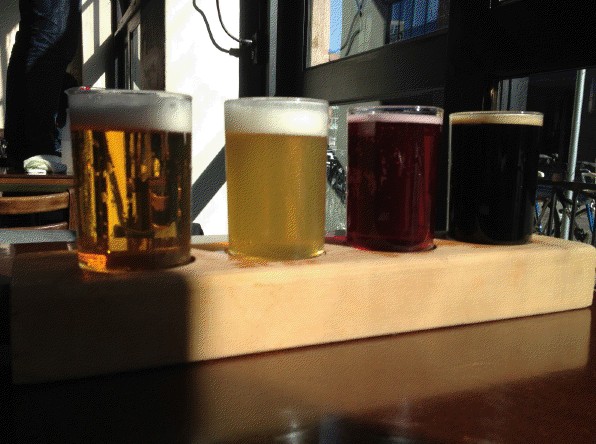 I went to Bitter specifically to try the R&B Milk Stout (an exclusive) since I am a pretty big fan of Rogue Creamery but alas this milk stout was just okay for me. Of the dark trio I actually think the Mill Street Coffee Porter was the best. Luckily, The Bitter Chill was a standout for me, a savoury and spicy beer cocktail that would work wonders on a hot day. 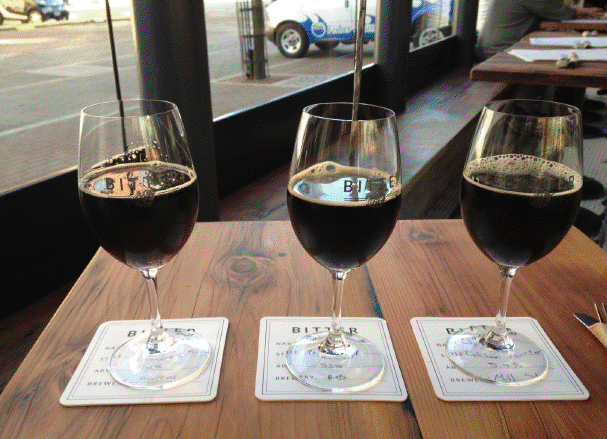 I am not sure I get the late opening times for the tap houses, do people really only want to drink beer after 5 p.m.? The Alibi Room opens earlier on the weekend but then the kitchen closes mid-afternoon until dinner. If you can’t get any food to soak up some of your beer, you can’t makes room for more beer, which ends the vicious but profitable cycle that traps beer geeks like lint in the dryer. Also, I know we live in Vancouver but eleven dollars for a flight of three beers? Really? C’mon.

Editor’s note: Brewpublic welcomes beer blogger Sara Hancock to the fold. Sara hails from beautiful Vancouver, BC  (hence the added “u” in words like neighbourhood, flavour, and savoury). We are very happy to have her on board and hear more about the wonderful brews of British Columbia and Greater Cascadia. Check out her blog The Parting Glass and follow her on Twitter @PartingGlassBlg.