Of all the killer beer events that we had the privilege to attend in 2012, the first annual Firestone Walker Invitation Beer Festival was arguably the best of all.

Showcasing craft breweries from across the country, many of which are not regularly available on the West Coast, FWIBF was was the ultimate treat for beer lovers in California’s Central Coast. Breweries such as Bells and Founders of Michigan, 3 Floyds and Sun King of Indiana, Cigar City of Florida, Allagash of Maine, Dogfish Head of Delaware, and many many many more served to make the Paso Robles Fairgrounds, at least for this weekend, a sort of craft brew Graceland. 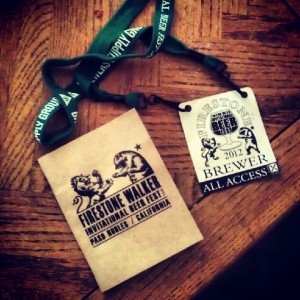 Several noteworthy California breweries such as Alpine, The Bruery, Lost Abbey, Pizza Port, Stone, Moonlight, Russian River, Kern River, and many many more were on hand for this mindblowingly awesome event, too. Firestone Walker Brewery itself is worth the journey to Paso Robles, CA. Under brewmaster Matt Brynildson, FSW perennially puts forth some of the world’s finest year round beers (not to mention their extraordinarily crafted barrel-aged treats).

An oasis of spectacular beer in the heart of a wonderful wine-producing region, Firestone Walker produces the kind malted beverages that dreams are made of. And coming this June, the FWIBF returns for a second year with a sick amount of beer accompanied by stellar music and food. What’s not to love. Tickets are expected to go fast, so don’t delay. Starting on February 1, they go on sale, but don’t expect any still available on February 2. Here’s the details from a press release at Firestone Walker:

Tickets will go on sale on February 1, 2013 via www.firestonebeerfest.com. The event is hosted by Firestone Walker Brewing Company and held at the Paso Robles Event Center in partnership with the Paso Robles Pioneer Day Committee. Proceeds from the event benefit Pioneer Day, a local community celebration established in 1931.

“The Firestone Walker Invitational Beer Fest was born from a dream of creating a world-class festival featuring not only the best brewers in the world, but brewers whom we feel are leaders in the craft beer revolution,” said Matt Brynildson, Brewmaster at Firestone Walker Brewing Company. “This is a day where we can all put down our sales and marketing pitches and simply commune and share our beers and stories with people who are truly interested in craft beer.”

Last year’s inaugural fest sold out quickly and was widely praised as one of the nation’s can’t-miss craft beer events, with attendees embracing the casual open-air setting, access to rare beers and opportunity to hang out with leading brewers.

The lineup for the 2013 Firestone Walker Invitational Beer Fest is still being finalized, but attendees can expect 40+ breweries, 20 restaurants and three bands. The event will run from 1 p.m. to 6 p.m.

Each participating brewery will pour one “sessionable” beer registering less than six percent alcohol by volume, as well as one rare specialty beer. Brewers will be on hand to talk to attendees about their beers.

The cost is $75 per person, and attendees must be 21 years or older. Admittance includes complimentary tastings of beer and food while supplies last, as well as a logo snifter glass. Ticket availability is limited.

“The brewers really go all out at this event,” Brynildson said. “You will recognize some of the beers, but you can also expect the unexpected.”

More information and a video of last year’s fest can be viewed at: http://www.firestonebeer.com/mingle/fw-invitational-beer-fest.php

Firestone Walker Brewing Company is a pioneering regional craft brewery founded in 1996 and located in the Paso Robles wine country on California’s Central Coast. The brewery specializes in iconic pale ales and vintage barrel-aged beers. Firestone Walker Brewing Company was awarded Mid-Sized Brewery of The Year honors at the 2003, 2007 and 2011 Great American Beer Festivals® as well as Champion Mid-Sized Brewery honors at the 2004, 2006, 2010 and 2012 World Beer Cup® competitions.