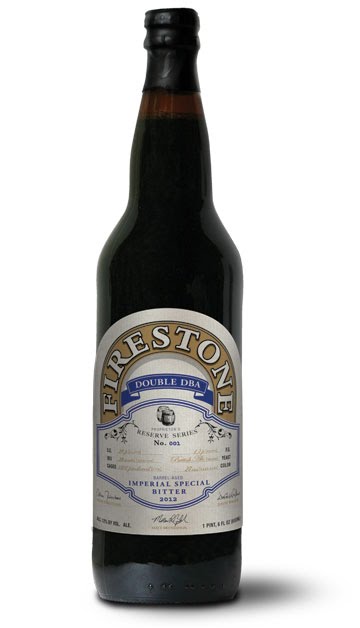 One of America’s (if not the world’s) finest brewery, Firestone Walker Brewing Co. has announced the release of a new beer, Double DBA. This beefed up rendition of their flagship offering, Double Barrel Ale (DBA) is a limited edition imperial special bitter ale aged for a year in oak barrels and old bourbon barrels. And just when you thought your livers and wallets maxed out on beers like Parabola and §ucaba from their Proprietor Reserve Series, this stalwart big brew clocking in at 12% ABV joins the ranks. Here’s the word on the new Double DBA from Firestone Walker:

Firestone Walker Brewing Company’s latest ode to oak is also its most intensive yet—Double DBA, a limited-edition imperial special bitter ale that was partially fermented and fully aged for 12 months in a combination of new American oak barrels and retired bourbon barrels.

“We started our brewery by fermenting our flagship Double Barrel Ale (DBA) in oak barrels,” said co-proprietor David Walker. “Double DBA brings us full circle as our first release that is both fermented and aged in barrels. If there’s a beer that represents the soul of our brewery, this is it.”

Double DBA now joins Parabola and §ucaba as the latest addition to Firestone Walker’s Proprietor Reserve family of vintage barrel-aged beers, which occupy upwards of 1,500 barrels at the brewery in Paso Robles. Each of these beers was initially developed as a component for Firestone Walker’s annual barrel-aged Anniversary blend, which will see its seventh edition later this year.

Double DBA is essentially DBA brewed at double strength and matured for an extended period. The same DBA malts and hops were used, but at twice the amount. Like DBA, Double DBA was partially fermented in a “union” of new American oak barrels typically used for winemaking (the balance was fermented in stainless steel). Firestone Walker Brewing Company remains the only American brewery to ferment beers with the union method, which dates back to 19th century Britain.

After fermentation, the beer was racked and returned to the union barrels as well as bourbon barrels, where it aged for one year. “The result is a big and complex beer that still offers the balance and drinkability that are the hallmarks of DBA,” said Brewmaster Matt Brynildson.

Double DBA was bottled without filtration. The English caramel malts lend a rich toffee and crème brulée character that pairs well with the assertive medium toast of the American oak barrels.

Double DBA will be released at the brewery’s three hospitality venues—the Visitor Center at the brewery in Paso Robles, the Taproom restaurant in Paso Robles and the Taproom restaurant in Buellton—this weekend, and will be released in 22-ounce bottles to select markets across the United States over the next two weeks. Only 3,500 cases were produced. The suggested retail price is $15.99 per bottle. Double DBA is also available in very limited draft.