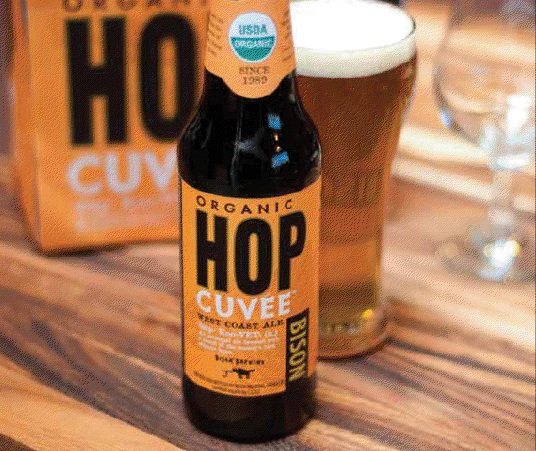 Bison Brewing of Berkeley, California has been an organic craft beer pioneer since 1989. With this uncompromising approach to sustainable brewing, the company has been limited to higher costs and less available ingredients than your average brewery. But as time passes the few breweries in league with Bison who have remained organic right down to the hops (until 2013 other certified organic breweries could get away with non-organic hops as long as the product was 95% organic by weight, but Bison never compromised) have been blessed with a spurt in the growth of new certified organic hop varietals. Instead of more pedestrian hop varieties, last year’s harvest yielded the likes of highly sought after organic Simcoe, Citra, and Centennials.

With these new hops that appeal to the modern day hop head, Bison brewmaster and owner Dan Del Grande has pushed forth to soon unveil a brand new sessionable West Coast ale known as “Hop Cuvée” which makes use of kettle addition and dry-hopped lupulin that offers a tropical, floral, and resinous bouquet unlike anything the organic brewing world as smelled or tasted yet.

A light base of 2-Row, Carapils, and Munich malts will make this beer far less malty and mealy than Bison’s flagship IPA, which will be pared back as this hop-forward release pushes forth. According to the brewery, Hop Cuvée pairs well with shellfish, sushi, cured meats, curries, Vietnamese pho, American barbecue, jambalaya, fried and spicy foods, carrot cake, aged Gouda, or cave-aged cheddar (hey Bison, how about a list of foods the beer doesn’t pair well with – that might be a shorter list). Look for some prominent changes to the beers at Bison. Re-branding is slated to happen soon as their beloved Chocolate Stout get emboldened with new ingredients and the IPA is phased out. Keep and eye out for Bison and remember to keep it organic!

Learn more about this new beer from Bison Brewing at http://bisonbrew.com/hop-cuvee