So the craft beer world is coming to a point where new categories are becoming more common with every passing year. Southern California’s Stone Brewing Co. has taken the reigns recently when creating a new style of beer, a black rye Kölsch-style ale. A black rye Kölsch I say? I wonder what the brewers from Cologne (Köln), Germany would think of us Americans degrading their century old beer style known as Kölsch?

ESCONDIDO, CA – Last year, the Brew Crew of Stone Brewing Co. participated in an intradepartmental competition dubbed the Stone Spotlight Series, in which teams of two competed for the opportunity to have a beer they devised brewed, packaged and distributed nationally. Stone wanted to “spotlight” the talented individuals that make up the Stone brewing team and encouraged them to explore what craft beer is truly about: ingenuity, creativity and…well, having fun. Beginning today, the craft beer company is proud to unveil the inaugural prize-winning beer in the Stone Spotlight Series: Spröcketbier, a black rye Kölsch-style ale. Fans across the U.S. may purchase the limited-release beer in 22-ounce bottles and on draft at retailers, restaurants and bars in select markets nationwide.

Stone Quality Assurance Supervisor Rick Blankemeier and Production Warehouse Lead Robbie Chandler comprise the winning duo, Team Spröcket. Together, they gave birth to (uhhh, sort of) the champion beer recipe. Since both ingenious members of the brewing team regularly homebrew together, they used a previous recipe they had brewed for a rye Kölsch and added a Stone-like twist by adding more hops (naturally) and turned the traditionally golden beer dark by using black malt.

“We wanted to brew a low alcohol beer with lots of complex flavors and decided a Kölsch brewed with rye flakes and black malt would give us enough of a distinction to stand out in the competition,” explains Rick. “Tasting it after it was brewed on the small batch brewing system, we recalled an old SNL skit called ‘Sprockets,’ which features Mike Myers as a West German expressionist. Robbie and I both felt our beer would be something the German character Dieter would enjoy and can imagine him saying it is ‘dark and easy to drink’ (in his Americanized German accent). Thus the beer got named, Spröcketbier.”

Despite its dark hue, the beer carries traditional Kölsch qualities—it’s light-bodied and refreshing, with relatively modest alcohol content. Typically a style that’s pale in appearance, Spröcketbier used carafa malt which lends the beer its onyx color and adds a subtle roast character. The use of a Kölsch yeast strain gives the beer an overall crisp flavor, while flaked rye malt adds complex spiciness. Late hop additions in the whirlpool also contribute slight citrus and spice aromatics to the beer. All of these traits make for a brew that’s unique, Stone-esque and definitely ahead of its time.

“Stone Co-founders Greg Koch and Steve Wagner, and I were very impressed with the beer submissions received from the 20 brewing teams,” said Stone Brewmaster Mitch Steele. “The beers were all fantastic and it was a very tough decision, but Spröcketbier had a little bit of that extra Stone character that the three of us were ultimately looking for.”

Spröcketbier is intended to be enjoyed fresh within 120 days from its bottling or kegging date. Rick and Robbie’s brainchild brew will be available in very limited quantities, but fans may look forward to enjoying future beer releases from the Stone Spotlight Series that showcase Stone’s brewing talent. 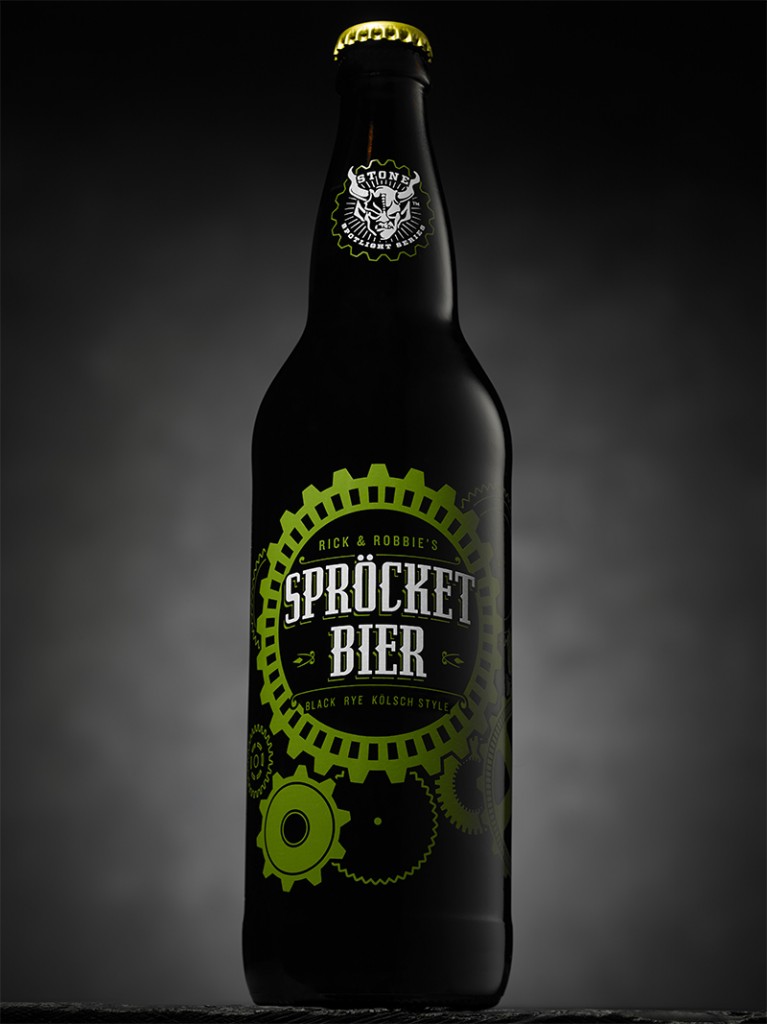 Tasting Notes, provided by Stone Brewmaster, Mitch Steele:
Appearance: Pours black with a rich tan head.
Aroma: Coffee and fruity esters from the Kölsch yeast strain. There is a little bit of spice and hints of smoke.
Taste: Very clean roasted malts and fruit.
Palate: Light body with a smooth, drying finish. Bitterness is at a perfect understated level.
Overall: Rick and Robbie knocked it out of the park with this beer. It’s a fun and unique take on a classic style, and it won against some very stiff competition from our other brewing teams.