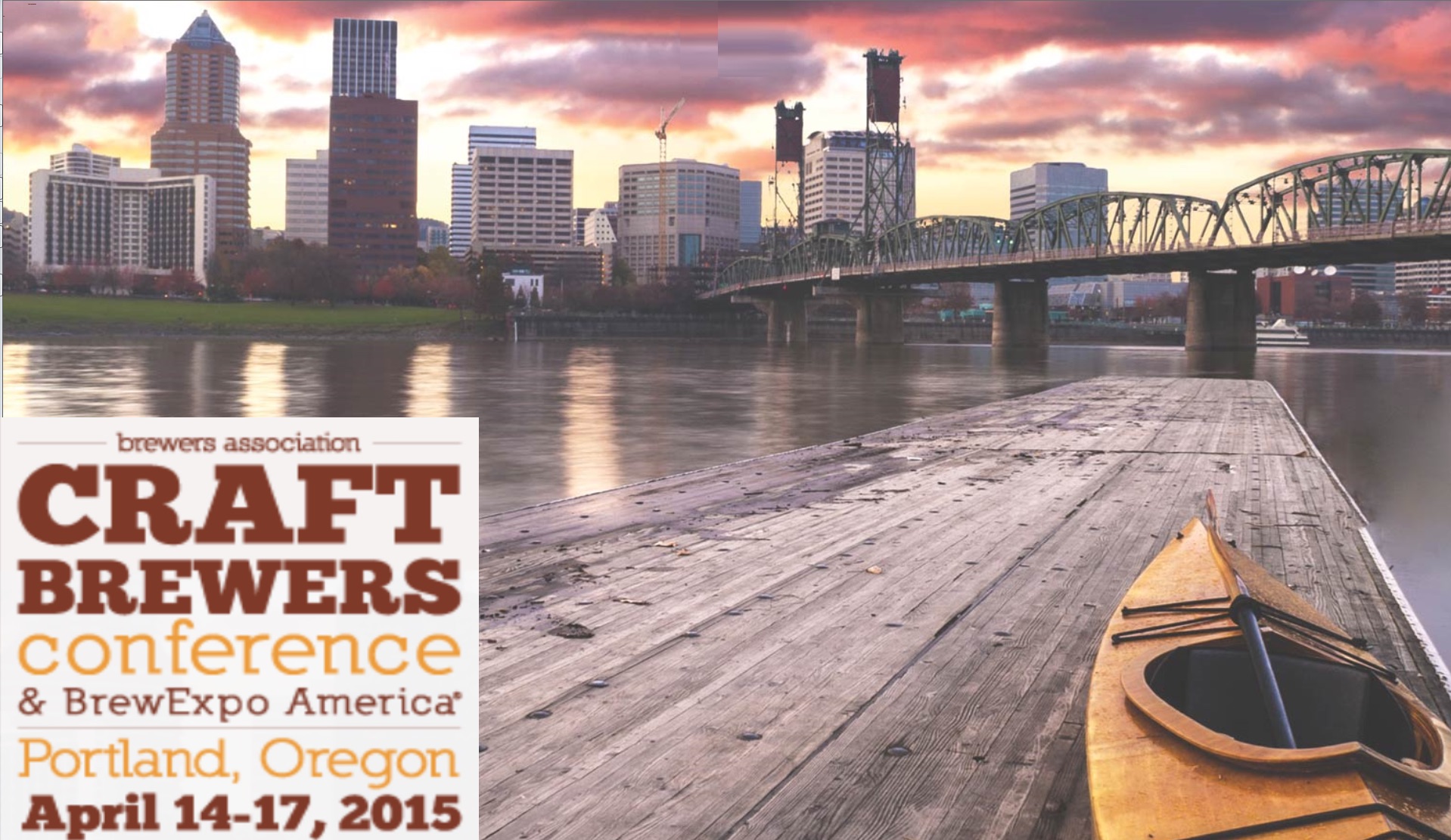 Things are beginning to get busy here in Portland as the 2015 Craft Brewers Conference officially kicks off this evening at the Veterans Memorial Coliseum for the Opening Night Reception. This industry only event will be abuzz with brewers and other brewing industry professionals snacking on the reported 21,000 Oysters among other locally and regionally sourced seafood and meat. Oh, and lets not forget the beer.

However, with this industry event comes some phenomenal peripheral events that continue to take place around Portland that all of us are welcome to attend. Just prepare wisely as there a few more days to go before this Craft Brewers Conference wraps up this weekend.

Here’s a list of some of the events taking place today, Tuesday, April 14th. Cheers!

They’ll also be pouring a Stone/Ska collaboration, plus some other goodies. 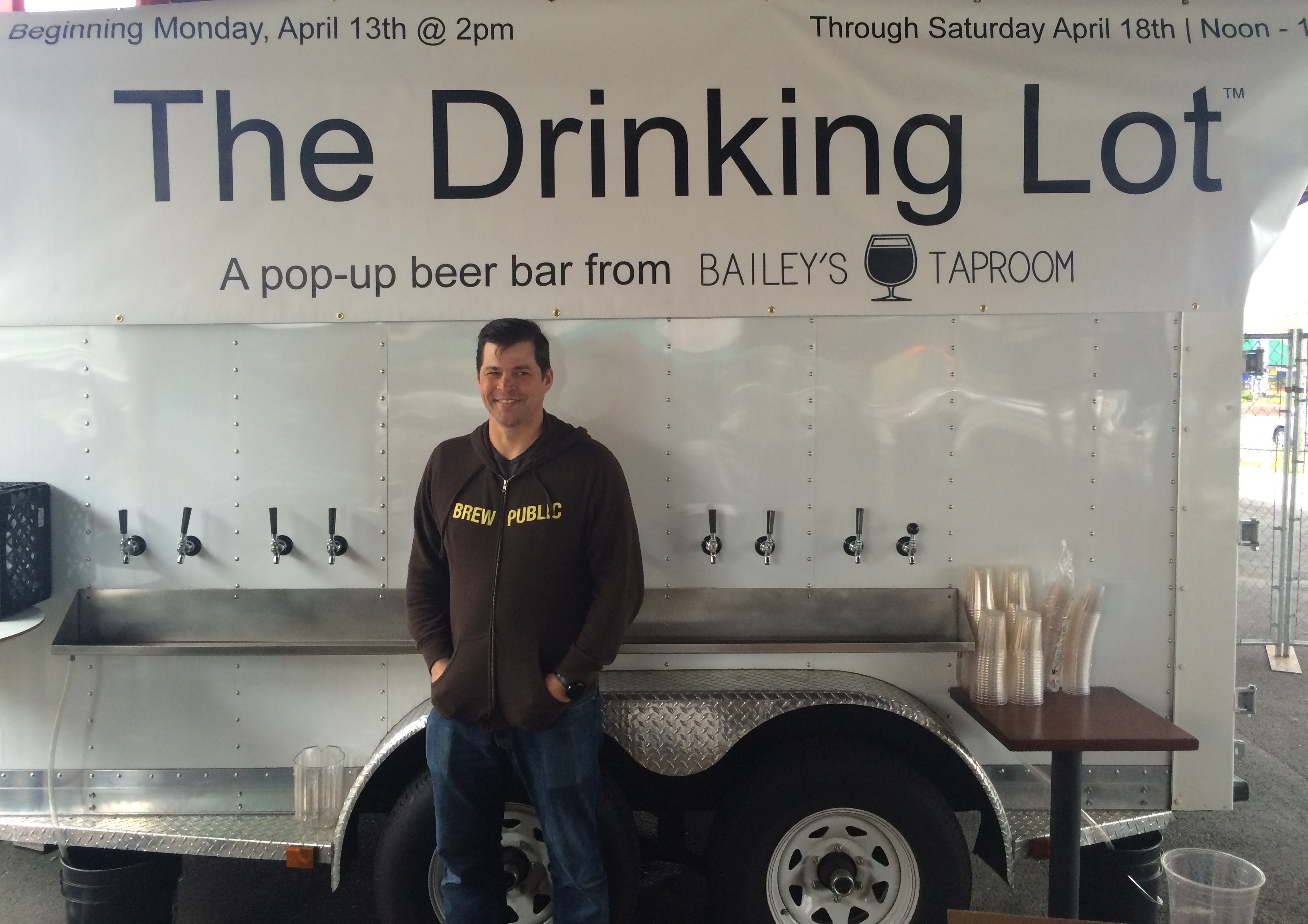 The Drinking Lot – Pop Up Bar
The Drinking Lot – 419 E Burnside St – Noon-10:00pm
The Drinking Lot will only be open from Tuesday through Saturday, April 18th from Noon to 10:00pm each day. Featuring a strong, refreshing selection of 12 rotating beers this 6 day pop up bar will be a great stopping point for both industry professionals and craft beer drinkers. The featured beers will listed from Bailey’s signature Digital Pour beer menu.

Apex Bar Hosts Shelton Brothers
Apex Bar – 1216 SE Division – 2:00-7:00pm
On the opening night of CBC, Apex will be hosting two different tappings. The first will begin at 2:00pm when 11 of the taps will be home to import legends, Shelton Brothers. 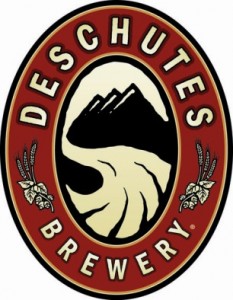 Belmont Station – 4500 SE Stark St. –  3:00-6:00pm
Giant beer barrel? Mobile tavern? No matter how you look at it, whenever Woody,  Deschutes’ginormous beer-barrel shaped party-on-wheels, rolls into town, you know it will be a good time.

And Woody just got a makeover, with all kinds of shiny new features. This will be his Portland debut, so swing on by to see Woody in action! Belmont Station will be pouring 8 different and very special Deschutes beers on draft (4 in Woody!) and they will even be handing out commemorative CBC/Deschutes/Belmont Station glassware (while supplies last)!

Here are the beers that will be pouring:

The Sour and Wild Invitational
Cascade Brewing Barrel House – 939 SE Belmont St. – 3:00-11:00pm
Cascade will feature a number of exclusive Cascade blends alongside unconventional – and in some cases rare – sour and wild beers from breweries around the country. There will also be a limited food menu available, as well as a merchandise and bottles sale station. There is no admission to attend the event and is open to the public. Admittance will be limited to ages 21 and over.

The event will sell 8-oz pours of the specialty beers; payment is by cash or credit. The lineup will rotate throughout the five days. More details are here. 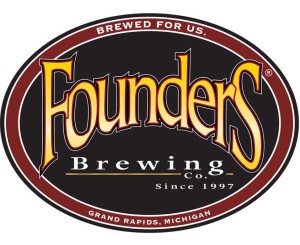 The Upper Lip – 720 SW Ankeny St – 4:00-10:00pm
The Upper Lip will be hosting Founders Brewing today with some very special, unique taps that are rarely seen out here on the West Coast.

Stone: Brewin’ With The Locals
Green Dragon – 928 SE 9th Ave. – 4:00-8:00pm
Tonight the Green Dragon is going to be showing off some of the finest beers in the land for this epic event featuring Stone Brewing Co.!

Stone has collaborated with local breweries The Commons Brewery & Breakside Brewery to create two luscious beers that you won’t be seeing for long.

On top of that, Stone’s newest Spotlight Series ale will be making it’s premier – the illusive Imperial Mutt Brown Ale. 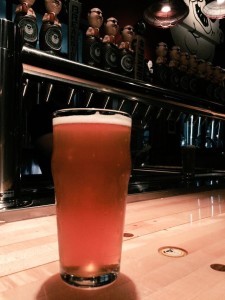 N.W.I.P.A. – 6350 SE Foster – 5:00-10:00pm
Mike, Mark and Owen have been slaying it down in the Pearl since Fat Head’s opening a few months ago. For those that haven’t been able to make it down, or just want some more, this is for you. We will be pouring IBUsive IPA, Head Hunter IPA, Head Shrinker IIPA, Semper Fi IPA and hopefully Predictable IIPA, the Barley Brown’s/Country Malt Group/ NWIPA collaboration!

Meet the Brewers from Green Flash & Alpine
Roscoe’s – 8105 SE Stark – 5:00-8:00pm
Come out to Roscoe’s in Portland during CBC week for a special Green Flash/Alpine launch party. Head Brew masters Chuck Silva from Green Flash and Pat McIllhenney from Alpine Beer will be on hand to talk about their creations. 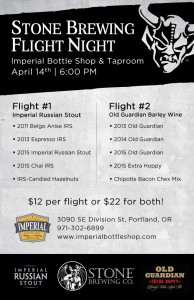 Imperial Bottle Shop – 3090 SE Division – 6:00-10:00pm
Imperial will be offering two vertical flights of big beers from Stone Brewing Co., each paired with a sample of their delicious homemade snacks (a futile effort to keep people somewhat sober). Purchase one flight for $12 or both for $22.

Firestone Walker and Boneyard at Apex 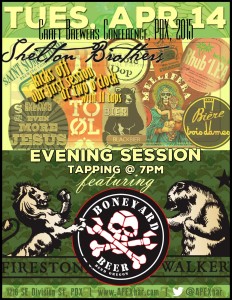 Apex Bar – 1216 SE Division St – 7:00pm-Close
Come out and join the Firestone Walker and Boneyard crew for an eclectic mix of Bitter and Bourbon beers. Meet up with friends old and new for some good times and awesome beers.

Bell’s After Dark
Belmont Station – 4500 SE Stark St. –  8:00pm – CLOSE
The last time the Craft Brewers Conference was in Portland, Bells’ Brewery Co. founder Larry Bell threw what continues to be one of the most legendary after-parties ever. In his hotel suite, no less.

We don’t expect this gathering to come close to topping that epic night, but The Station thought it would fun to host Larry and some of his crew and enjoy several Bell’s beers on tap — a rarity in these parts for quite some time. Belmont also will have bottles of Two Hearted Ale for sale in the bottle shop!

Here’s what will be pouring:

Just stop by before during and after the opening reception of the Craft Brewers Conference and grab a burger, drink our liquid, and witness a beer, music and dance pairing that is the first of its kind!

Sassy’s, known for their well curated draft beer selection and no cover policy, has graciously allowed us to host an evening of collaboration and experimentation in music, beer and performance art.

During the Showbrews party our breweries will be pairing beers and music along with performances by Sassy’s professional dancers. Three curated 3 song sets will start around 9:30pm

The beers being served are:

About the Breweries:
Against the Grain is from Louiseville
Gigantic is on the home team
Marz is based in Chicago