Crafted from a resplendent blend of fresh-pressed juice from its namesake, ​Cosmic Crisp®​, and other Northwest apples, this cider shines like starlight. Bright, fruit-forward aromatics collide with a high-ABV and high-acid profile for a truly heavenly experience. If some of the adjectives used to describe this product seem a bit out of this world, it’s because the cider makers were truly blown away with the cider that this apple made.

“When fermented, the aromatics that are released from the Cosmic Crisp​®​ apples are truly unique,” said Dave Takush, Head Cidermaker, “Strong notes of white currant and pineapple blossom off of a platinum colored cider that is as crisp and sparkling as you could imagine. People can make all the interstellar puns they want, but this is truly a unique and beautiful cider”. 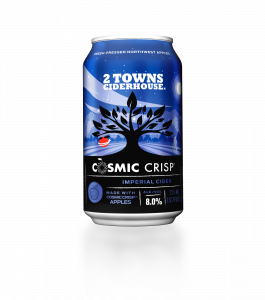 While this is the first cider to be produced on a large scale using Cosmic Crisp​®​ apples, 2 Towns is also proud to have been the first cidery to produce a cider crafted from this exceptional new apple. Their small-batch, draft-only version was released in January, and they were ecstatic to learn that it won Platinum in SIP Magazine’s Best of the Northwest awards. One of the west coasts’ most prestigious craft alcohol awards, it just went to show the quality product that would come from this exciting new apple varietal.

Cosmic Crisp​®​ apple is the work of 20 years of study and research by Washington State University, resulting in a classically bred hybrid of Enterprise and Honeycrisp apples. The resulting fruit is a large, round, crisp, and super juicy apple that is perfect for snacking, baking, and, perhaps most importantly, cider making.

“We are proud to have been selected to partner with the COSMIC CRISP® team and launch this apple out into the world,” said Nels Jewell-Larsen, 2 Towns’ Director of Business Development, “This is a very special apple and it has been a pleasure to work with a group that is as passionate about apples as we are.”

With a bubbly visual profile that glistens and gleams like the starburst-like lenticels on the apple’s skin, a remarkably light (for 8% ABV) and fruit-forward profile,​ Cosmic Crisp®​ is sure to take you on a truly interstellar cider experience with every sip.