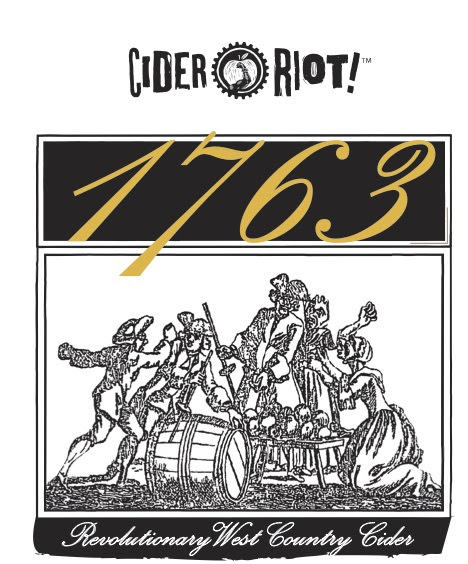 Beginning today Portland’s Cider Riot! releases its latest seasonal offering, 2014 Vintage 1763. The base cider of 1763 gets its name and inspiration from when English Prime Minister John Bute imposed a cider tax in 1763 the people of the West Country rose up in a revolt known as the Cider Riots. Now 250 years later, a small scale cidery in Portland’s North Tabor neighborhood made its first cider, fittingly entitled 1763 Revolutionary West Country Cider.

The 2013 vintage was highly acclaimed and garnered a silver medal at the Great Lakes International Cider and Perry Festival. Now the 2014 Vintage is ready for consumption. The warm summer of 2014 raised the sugar content of the cider apples, so this version of 1763 is stronger, at 7.5% ABV, than the 2013 vintage. It has the same broad tannins as the 2013 version, but a rounder fruitier flavor. 1763 pairs well with sharp cheddars and rich blue cheeses such as Stilton. The perfect accompaniment for a traditional ploughman’s lunch.

The 2014 Vintage 1763 is limited to 100 cases, and available in fine Portland area bottleshops and grocers beginning today, August 19th.