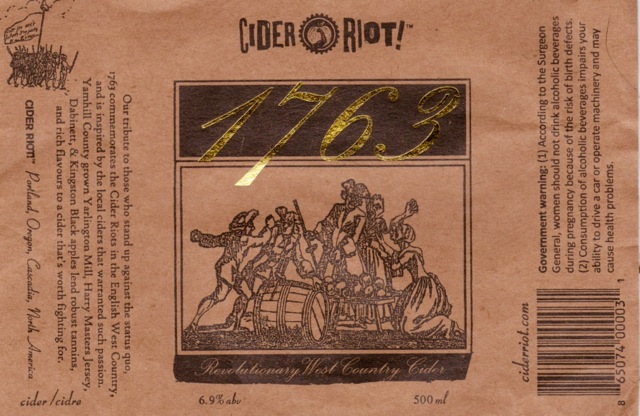 Cider Riot! invites you to toast tradition and the revolutionary spirit with a glass of 1763 Revolutionary West Country Cider on Saturday, August 2nd at Bushwhacker Cider.  The release party will take place from 4:00 to 8:00pm with a special performance from the Bridgetown Morris Men.

“1763 is our tribute to those who stand up against the status quo,” says cidermaker and Cider Riot! instigator Abram Goldman-Armstrong. “It’s a traditional dry cider in the spirit of the West Country ciders that inspired people to take to the streets to protest Prime Minister John Bute’s cider tax. We use exclusively Yamhill County grown English cider apples in the 1763.”

Unlike many modern ciders, which are made from common eating apples, 1763 is more full bodied from the tannins from bittersweet and bittersharp apple varieties, including Dabinett, Yarlington Mill, Harry Masters Jersey, and Kingston Black. Pressed in the fall of 2013, the cider fermented and aged throughout the year.

“Ciders in the style of 1763 are what got me into cidermaking,” says Goldman- Armstrong, who worked in the Yamhill County orchard where the apples are grown in high school in the1990’s, before a long career as a homebrewer and home cidermaker lead him to found Cider Riot! in 2013.

To celebrate the release of 1763, Cider Riot! invites Portlanders to “Riot like tis 1763” with the Bridgetown Morris Men and cheeses from the English West Country at Bushwhacker Cider. In England Morris dancing and cider go hand in hand, and the Bridgetown Morris Men even perform a traditional Wassail dancing through the cider orchard where the apples in Cider Riot! 1763 are grown to wake up the orchard in January. At the Bushwhacker event Cider Riot! 1763 will make a rare draft appearance, along with Cider Riot! Everybody Pogo hoppy cider, Burncider Dry Draught Cider, and Hedgerow Fruits blackcurrant and plum cider.

The 2013 vintage of 1763 Revolutionary West Country Cider is limited to 100 cases. The label is based on a 1763 political cartoon depicting a cidermaking couple accosted by King George’s exisemen. Despite the Cider Riots, George Grenville, the Prime Minister who replaced Lord Bute, pressed through the cider tax. After the unrest it had caused, he decided not to impose any more taxes on the domestic populous, instead passing the Stamp Act on the Colonies in America.

Bottles of 1763 will be available for sale and Goldman-Armstrong encourages you to cellar a few bottles for special occasions and he recommends pairing it with bold blue and cheddar style cheeses.