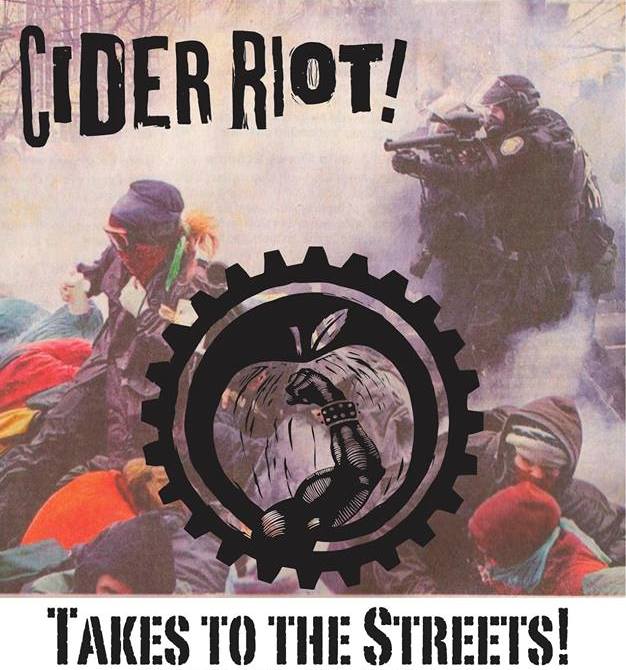 Last year Portland beer writer, Abram Goldman-Armstrong, began a Kickstarter campaign in hope of raising enough capital to start his very own cidery, Cider Riot!. When the Kickstarter campaign wrapped up, he exceeded his original goal that then allowed him to complete his cidery.

In February of this year, Goldman-Armstrong finally saw his dream become a reality when Bushwacker Cider hosted the release party for his first cider to hit the market. The place was jam-packed! Fast forward three months, now with a few more cider varieties under his belt, Goldman-Armstrong is set to fully launch Cider Riot! with two events on Saturday, May 10th, beginning with a parade departing Cheese Bar at 6:00pm that travels north to Biddy McGraw’s for a full night of celebration! 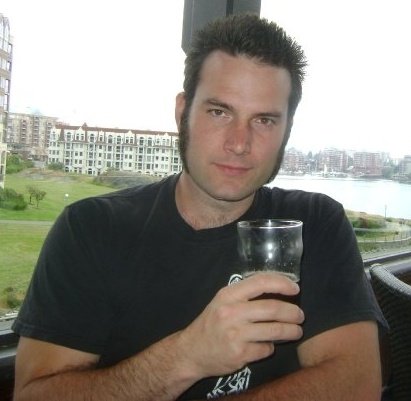 For those of you that may not know the background of Abram Goldman-Armstrong, Abe is an Oregon native that has been immersed in the craft beer and cider industry since turning 21. Ok, maybe he was conducting “research” during his college years before he turned of legal age. Considering that he passed the Beer Judge Certification Exam at the National level at the age of 21, this research definitely paid off. Since this time, he has gone on to judge at numerous amateur and professional beer and cider competitions, including the Great American Beer Festival, Mondial de la Biere in Montreal, British Columbia Beer Awards, American Homebrewers Association National Homebrew Competition, Heart of Cascadia, Fall Classic, Widmer Collaborator, and the Portland International Cider Cup. Quite the milestone for one that is in his mid-30’s.

In addition to all of this work, Goldman-Armstrong finds time to be the editor of Northwest Brewing News. He also has articles that regularly appear in such publications as Ale Street News, and American Brewer. He has collaborated with Hopworks Urban Brewery to create Secession Cascadian Dark Ale in 2009, in which he help create the name and style guidelines of this newly developed Cascadian Dark Ale or CDA. Then along with Widmer Brother’s Brewing in 2013 he helped create Green and Gold Kölsch, the official beer of the Timbers Army, which has now made a second appearance for the 2014 campaign. You may also see him around Widmer since he continues to conduct brewery tours but now is only doing so a few times per month. Yes, he keeps a very busy calendar!

And if his influence in the craft beer community is not enough, you may know Goldman-Armstrong from his face being plastered on various billboards and signs promoting our Portland Timbers. He’s a founding member of the Timbers Army and attends their matches here at home in Portland and throughout Cascadia. 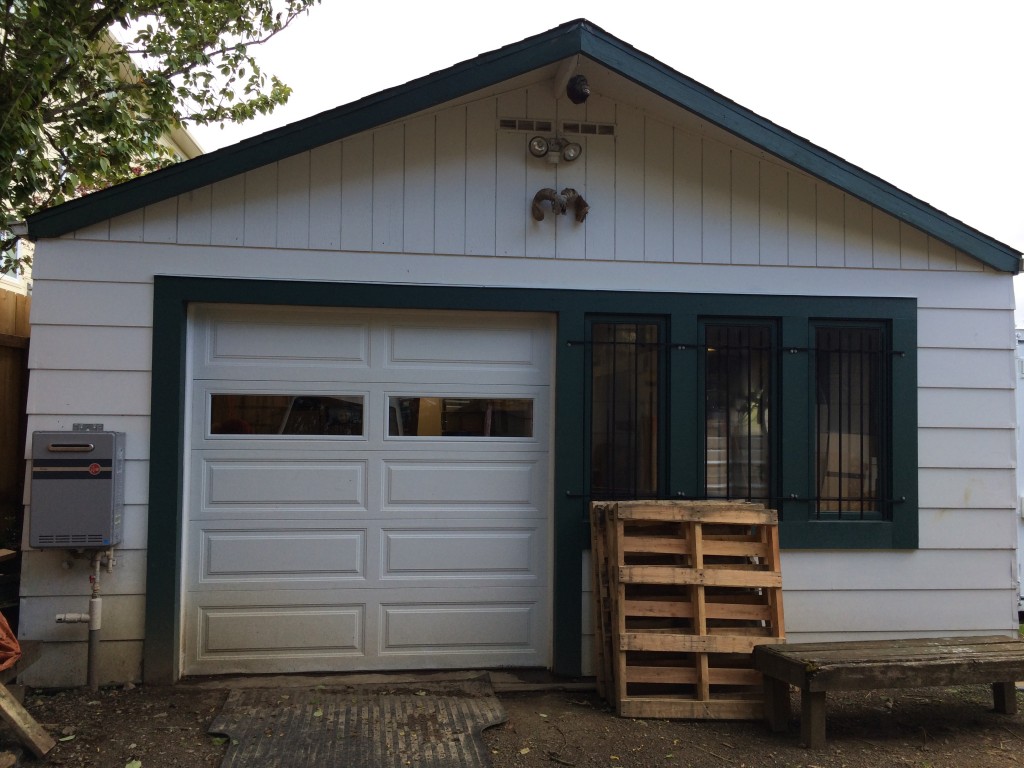 Between all of this he still found time to take his passion for cider, which he began at home, back in 1995 and finally taking it to the professional level in 2013. Itw was last year that Goldman-Armstrong laid down the groundwork in opening Cider Riot! an urban cidery dedicated to the production of flavorful and refreshing dry ciders. Cider Riot! started off as a delicate apple blossom of an idea, ripened through the stormy build out, last fall it was pressed permitting process and has fermented into reality. Now its time to take the cider to the streets. Goldman-Armstrong founded Cider Riot! in his detached garage in Portland’s North Tabor neighborhood.

Cider Riot! ciders can now be found on draft throughout Portland, at Grain Station in McMinnville and in 2-liter bottles of Plastic Paddy at various bottle shops in Portland. And for those of you in Eugene, there may be a keg of it still on tap at Falling Sky. But more importantly 500ml bottles of Everybody Pogo Hoppy Cider and Burncider Dry Draught Cider will be available very soon. 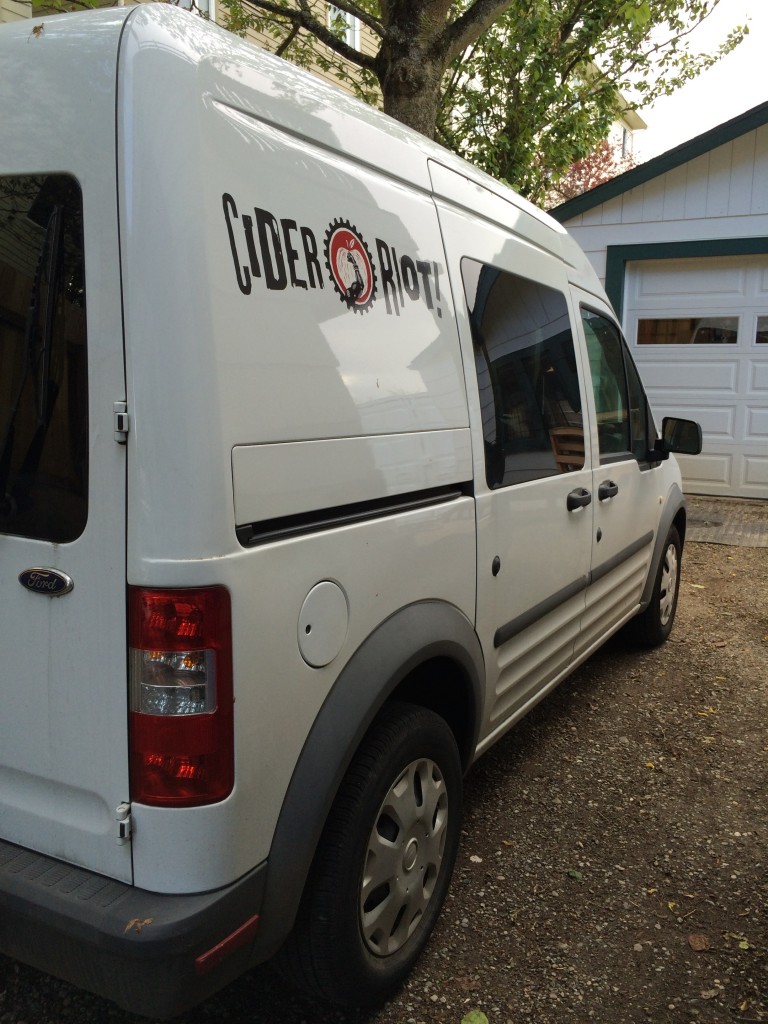 The excellent looking labels have now been completed, all that he is waiting for now is the uniquely sized bottles to arrive.

When asked why he decided to go with cider instead of craft beer where he is more distinguished Goldman-Armstrong states, “Cider was actually the first thing I homebrewed, when I was 17, I’ve made cider every year since. I like the connection to the land that cider has, picking the apples in fall and pressing them. The community effort of picking the apples is important to me, as I feel we are often divorced from nature and from community. In a brewery you’re always inside. I always have enjoyed working outside, and with cider I get to do that (at least once a year)”. He adds, “From a pragmatic standpoint, I didn’t have to buy a brewhouse, just fermentation vessels”. 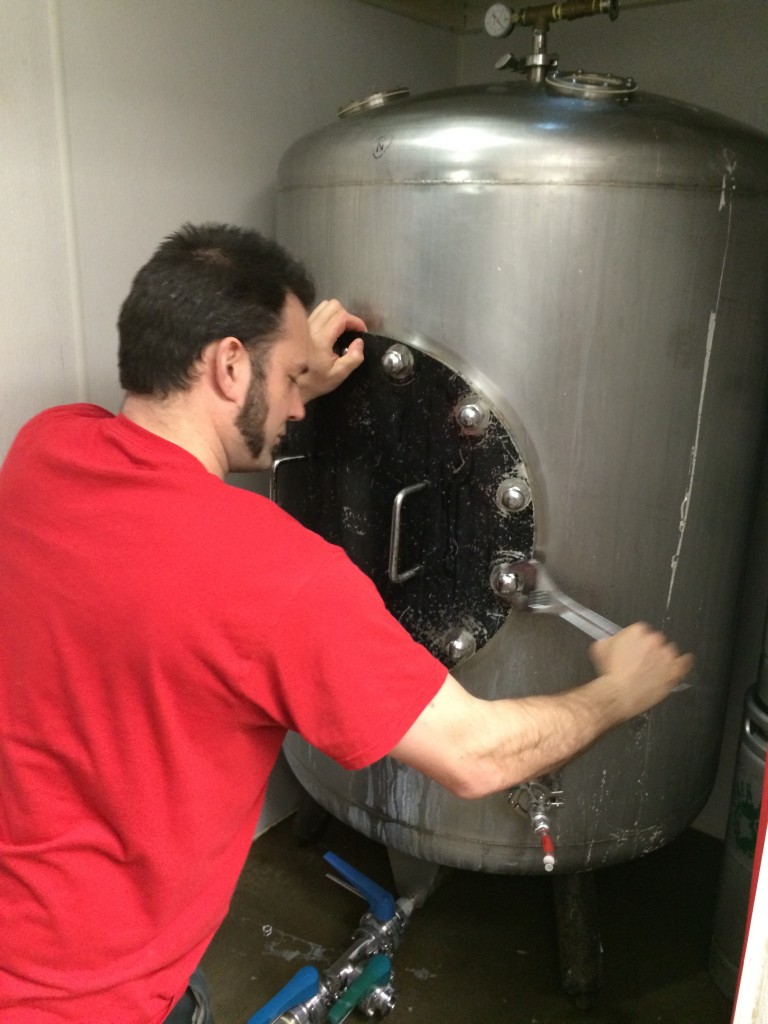 And from our visit to Cider Riot! I can attest to the hands on approach that Goldman-Armstrong takes with his new endeavor. It’s here where he hauls his fresh apple juice to begin its fermentation process. A majority of the fresh juice is purchased from Hood River Juice Company, the same company that many other cider producers purchase from. The other suppliers that Cider Riot! purchases from include White Oak Cider and the Goldman-Armstrong family orchard. Its from these two sources that he’ll produce his forthcoming English and French ciders from.

The setup at Cider Riot! is much more simpler than that of a craft brewery. After they receive the pressed cider he transfers this to one of his totes inside the cidery and from there the juice will transfer to one of the two very old school looking grundies that he acquired from Lucky Lab. These two 10HL capacity tanks were acquired from Lucky Lab’s original brewery. To clean these tanks one must physically unbolt and then bolt back the door on the tank. This very hands on task requires some extra attention when working in the cidery. 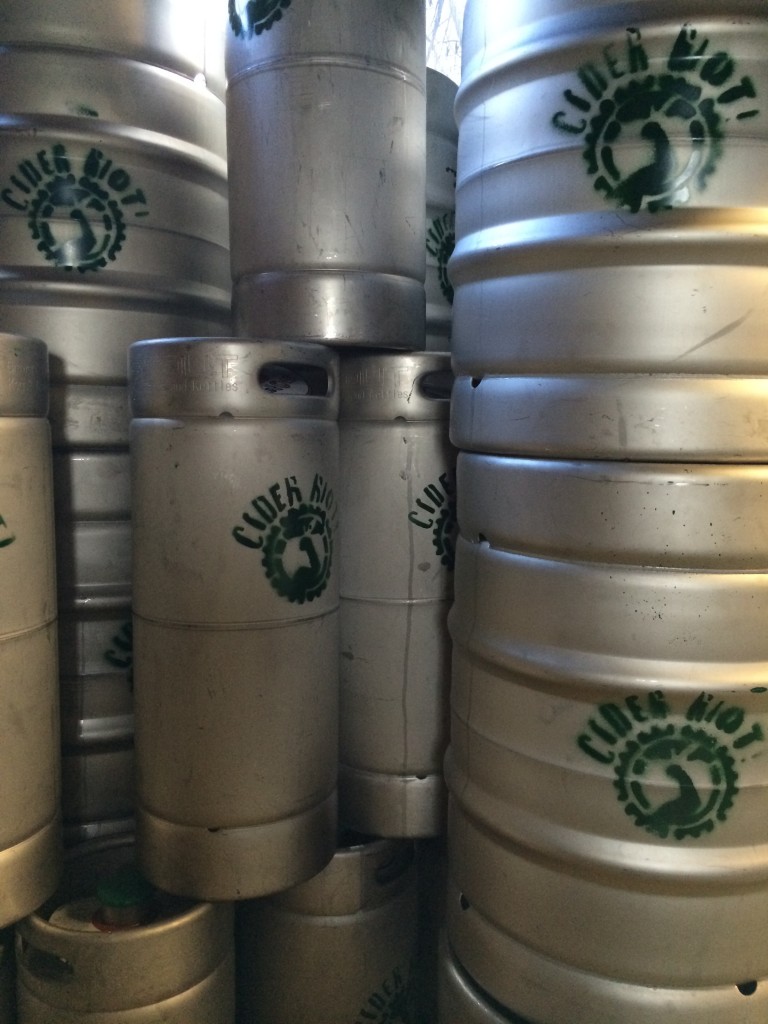 Then to get the cider to the market the cider is then either kegged or bottled. Currently Cider Riot! is filling 2-litter bottles of Plastic Paddy Irish Cider but once they receive their initial order of glass bottles you will begin to see their two year-round offerings, Everybody Pogo and Burncider, in 500ml bottles on your favorite bottle shop shelves.

What does the future hold for Cider Riot!? Not even three months out in the marketplace and he is now beginning to max out his space. Currently only self-distributing in the Portland area his next step is to take his cider across the US border into British Columbia next month. Then next year his goal is to begin distribution into Washington State. To make this jump he will most likely need to secure additional space which is already going through Goldman-Armstrong’s mind.

Another goal of Goldman-Armstrong’s is to begin a barrel aging program. This will be where he can begin to experiment more with the nuances of wood and cider. We welcome and look forward to this upcoming aging process. 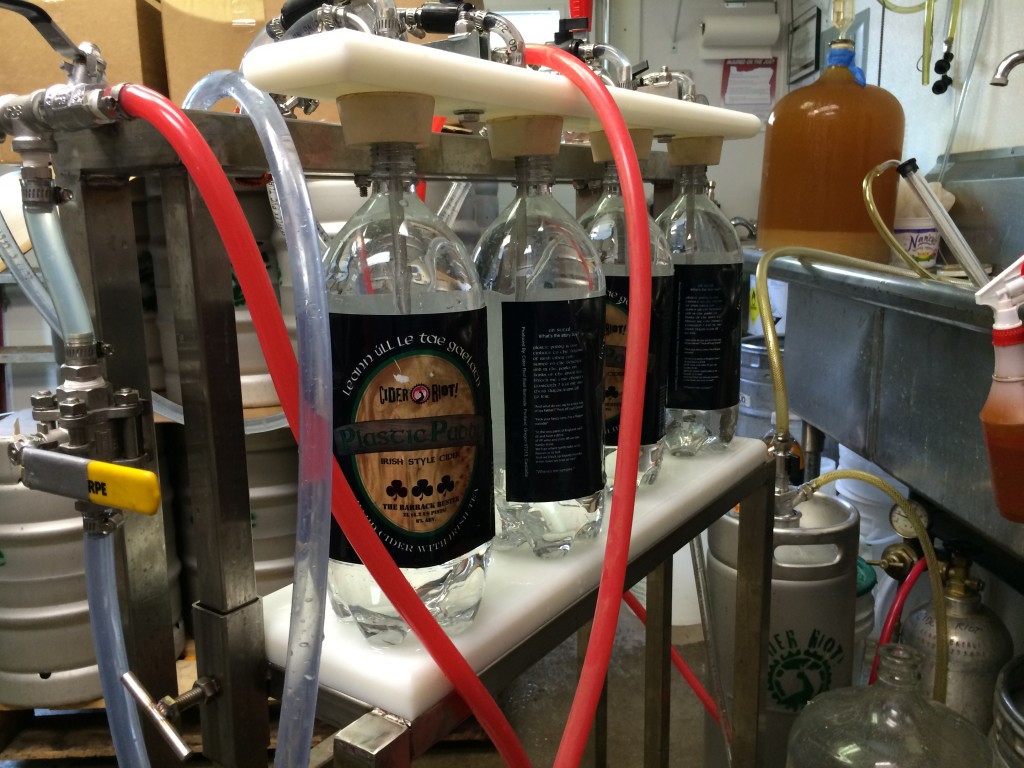 Cider Riot! will be participating in a few cider events this summer. The biggest one will be Cider Summit Portland taking place June 20-21 in its new location at The Fields Neighborhood Park in Portland’s Pearl District. If you’re a fan or just getting into cider we cannot recommend this festival enough.

To get ready for the big release party on Saturday, here are the descriptions of the three currently available ciders from Cider Riot! along with the brand new labels for Everybody Pogo and Burncider. These new labels look great!

Everybody Pogo™- Hoppy Cider
A refreshingly dry cider that’s got hops. Our roughcut tribute to football terraces and punk rock shows, dry and quenching with a hint of sweet apple flavor, as organically grown Goldings hops do the pogo dance across your taste buds. A distinctly Oregonian product, Everybody Pogo mates Hood River apples and Willamette Valley hops. Unfiltered and lightly carbonated. 6.5% abv 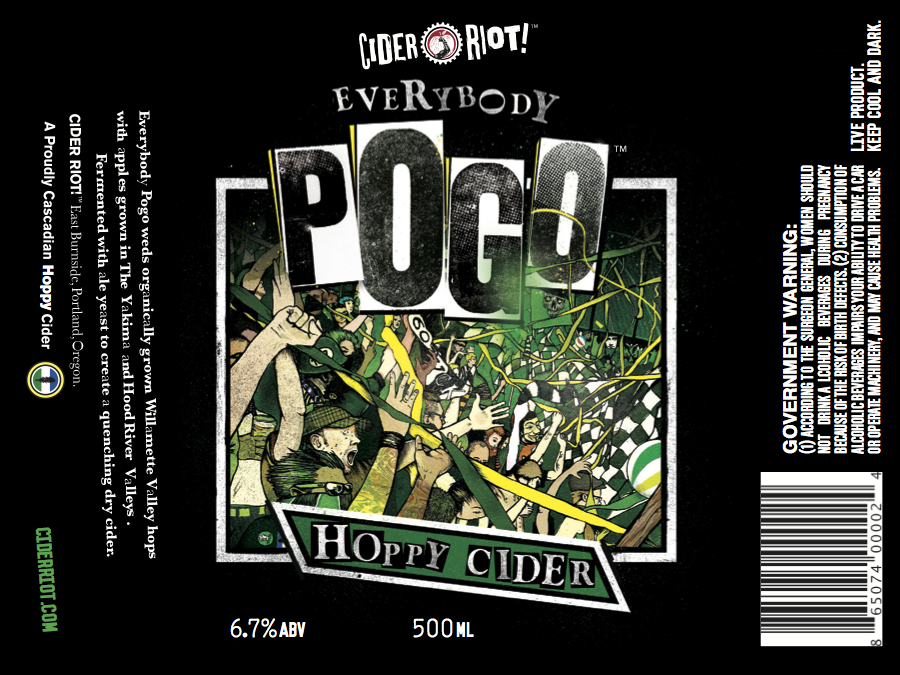 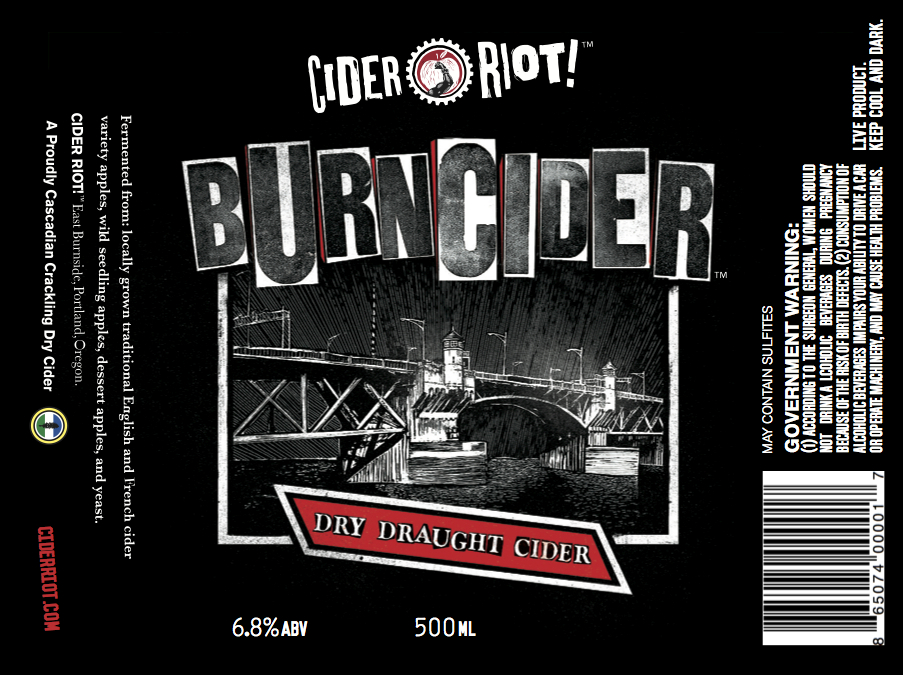 Plastic Paddy Irish Style Cider
Plastic Paddy is a fun-loving easy drinking cider released in honor of the 2-litres of Irish cider that Cider Riot! founder and cidermaker Abram Goldman-Armstrong enjoyed so much as a student at University College Cork. American dessert apples lack the characteristic tannins of European cider apples, so in order to replicate the flavor profile of a dry Irish cider, we use Barry’s Gold Blend tea from County Cork to infuse the cider with just enough tannins to balance the natural acids of the Hood River dessert apples used to make it. 6.0% abv 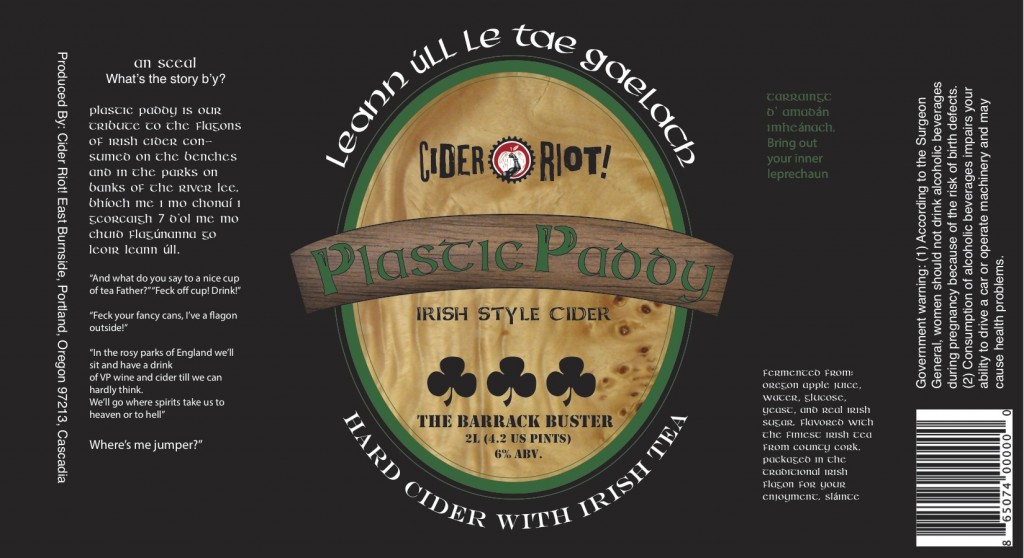 To officially launch Cider Riot!, Goldman-Armstrong will literally be taking Cider Riot! to the streets. The launch party will take place on Saturday, May 10th with a Cider Riot!’s Takes to the Streets Parade and Party. The parade will depart Cheese Bar at 61st and SE Belmont at 6pm, and progress down past the cidery behind the Cider Riot! color guard along with Pipe Major Tim Birr of the Tualatin Valley Fire and Rescue Pipe Band to Biddy McGraw’s Irish Pub.

Once at Biddy McGraw’s Irish Pub to compliment the fine ciders on tap, Cider Riot! has brought their friends the McGillicuddys, from Victoria, British Columbia down to play their pint-hoisting brand of Celtic punk rock. For those of you with little ones, kids are allowed in Biddy’s up until 9pm, so feel free to bring the next generation of cider drinkers to the parade and shindig this Saturday. 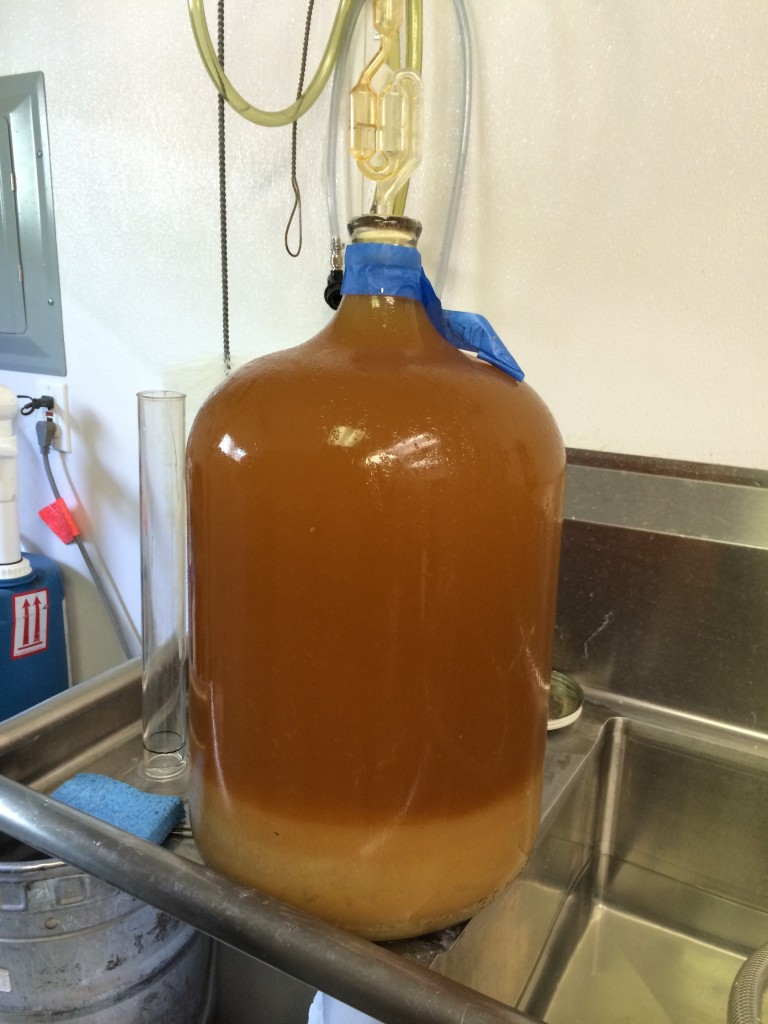 Join the celebration at Biddy McGraw’s and taste local favorites Everybody Pogo Hoppy Cider, Plastic Paddy Irish Style Cider, and Burncider Dry Draught Cider. And to make the night even more special, Cider Riot! will also be releasing a few special ciders from their experimental program. When we visited Cider Riot! earlier this week we were fortunate enough to sample their new Ella hopped Van Diemen’s Land Cider. Ella hops hail from Tasmania, Australia, the land formerly known as Van Diemens Land. These bittering hops offer up lots of an enticing citrus and mango flavors to the cider. If you want to try Van Diemen’s Land, you better arrive early to Biddy McGraw’s since this one is sure to go fast!