Finnriver Farm & Cidery will be presenting their line of cider at Vancouver’s Old Ivy Taproom on Tuesday, March 18th from 4 to 7pm. Finnriver West Coast Apple Ambassador, Jana Daisy-Ensign, will be on hand to sample out a wide array of Finnriver’s line of craft ciders and fruit wine.

Finnriver is a 33 acre working family farm located on the Olympic Peninsula, fermenting craft ciders and fruit wines. A selection of Finnriver’s Craft Ciders and Brandy Wines will be offered for a small tasting fee, including a debut of the 2014 release of Finnriver’s Farmstead Cider. Draft ciders will be on tap and bottled products available for purchase.

Finnriver’s Farmstead Cider is now available in Oregon in 500mls! 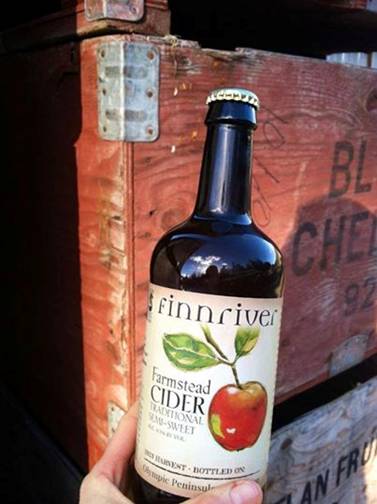 The 2014 Finnriver Farmstead release continues the tradition of a rustic, all-apple cider that includes a diverse array of locally harvested homestead apples (collected on World Apple Day from folks across the north Olympic Peninsula), heirloom and traditional cider apples from several distinctive orchards, and a blend of Washington Organic dessert apples.  We combine all of these apples to create a carefully balanced combination of fruity apple with intriguing bittersweet notes and delicate, earthy complexity. The result is an unfiltered, amber cider that offers a hearty taste of farmstead cider tradition. We are continuing to donating 10 cents of every bottle to local food banks and Finnriver’s cidermaker Andrew is now on the Food Bank board.

The Finnriver Ciders and Fruit Wines that will be pouring at Old Ivy Taproom include the following:

Dry Hopped Cider – A cider tribute to hop lovers, made with earthy heirloom and organic Washington dessert apples, and blended with the bold citrus and fine floral tones of organic Cascade hops. A sparkling, hopped surprise. Enjoy with savory, salty and spicy foods and cheese of all kinds. 6.5% abv

Solstice Saffron Cider – A new offering in our Elijah K. Swan, Seasonal Botanical Cider line, Solstice Saffron Cider. We began the fermentation of this cider on the Winter Solstice (December 21st) to welcome back the daylight and encourage the sun to shine… Local saffron gives this cider its warm color and a gentle bittersweet note that is balanced with the rounded flavors of anise and fennel, finishing on a lightly lingering licorice note. 6.5%abv

Farmstead Cider – Made with a blend of organic Washington apples and locally harvested backyard apples from the Olympic Peninsula, collected on World Apple Day.  This semi-sweet rustic cider offers an earthy taste of frontier cider tradition.  Enjoy with hearty foods and a sense of adventure. A portion of the proceeds from the sale of this cider benefit Jefferson County Food Banks. 6.9% abv

Black Currant Cider – A bright and lovely sparkling hard cider, with a purple splash, that blends earthy heirloom and organic Washington dessert apples with the sweet and tart mystery of black currant.  Pair with salads, fish, fragrant cheeses, light fare and even with dessert.  6.5% abv

Cacao Brandy Wine – Finnriver Apple Brandy & Cacao. A rich, warm, bittersweet dessert wine that melts in the mouth and heats the heart. With thanks to our friends at Theo Chocolate for the single-source, fair trade cacao extract from the Congo. 18.5% abv

Black Currant Brandy Wine – In the spirit of the cordial, we blend the warmth of our custom-distilled apple brandy with the tantalizing and tart complexity of organic black currant for a sweet and sumptuous dessert wine. 18% abv

Just make sure to make your way to downtown Vancouver’s Old Ivy Taproom on Tuesday, March 18th to be able to sample some of the finest ciders coming from Washington’s Olympic Peninsula.