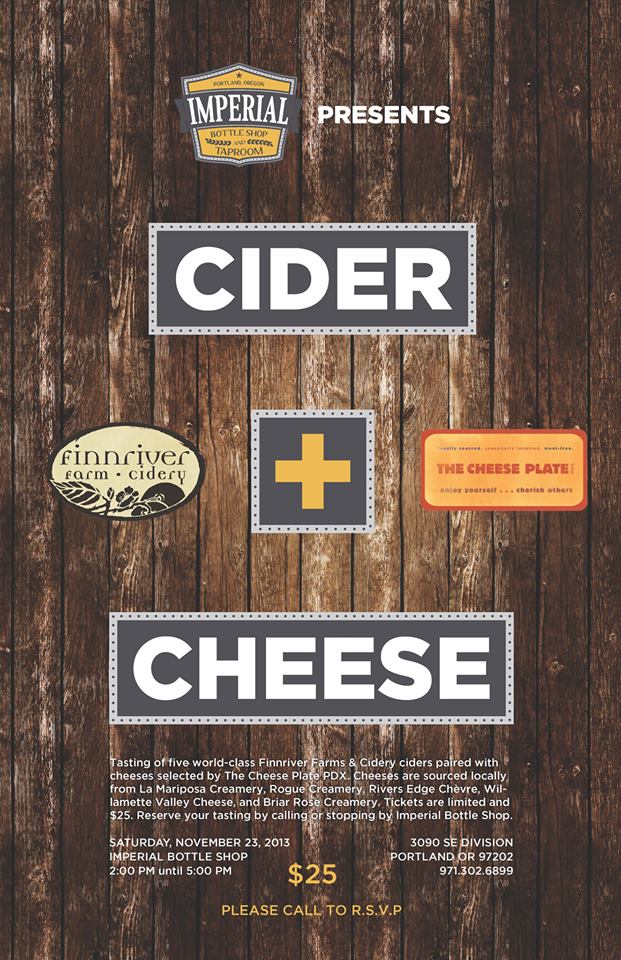 On Saturday, November 23, 2013, Southeast Portland’s Imperial Bottle Shop hosts Finnriver Farms and Cidery for an afternoon of cider and cheese pairings with The Cheese Plate. This special pairing event will take place from 2:00 to 5:00pm. Such a fun and enjoying way to spend your fall Saturday afternoon.

Tickets are currently on-sale for $25 each for 5 custom pairings of Finnriver cider and local Oregon cheese. Ticket can either be purchased online here, by calling Imperial Bottle Shop at (971) 302-6899 or by stopping Imperial at 3090 SE Division St.

The cider and cheese pairings include (baguettes also provided):

If you are a fan of cider, Finnriver is definitely one to seek out. Located in Washington’s Olympic Peninusula in the Chimacum Valley, Finriver is a 33 acre organic family farm and an artisan winery producing handcrafted hard ciders and fruit wines. Finnriver is committed to handcrafting both traditional and innovative hard ciders with a base of 100% apple juice, primarily Washington organic and Olympic Peninsula homestead apples. Their ciders are based on old hard cider traditions with modern perspective of what can be done with fermented apples.