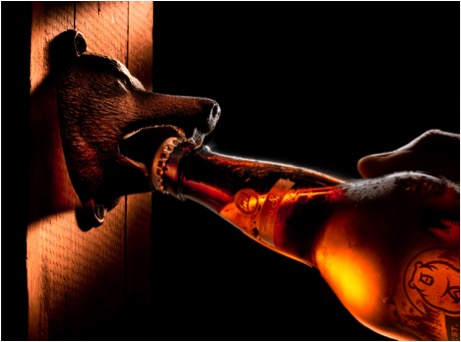 Throughout 2015, Grizzly Ciderworks is releasing six different cider varieties that make up its Founders’ Series. On October first, The Bruin: Dark & Dry Hopped and HopClaw: Triple Hopped were released together as a tribute to the company’s two-year anniversary of selling their handcrafted ciders. These were the two recipes that inspired Grizzly’s creators to grow their passion from a weekend hobby to a serious business and share their product with the masses.

“Long before Grizzly even had a name, Andy and I spent many nights and weekends home-brewing ciders in a style we wanted to drink. With so many products on the market that had a sweet profile, we created ciders that were more beer-inspired. We used beer yeasts and dry hopping techniques which created end products that were dry, unfiltered, opaque, foamy and full of hop aromas.”

Founded in the summer of 2013 by partners Andy Petek and Corey Haugen, Grizzly Ciderworks has had a long two years of development from a tiny garage in Woodinville, Washington to its current size and distribution. Petek and Haugen started Grizzly with a small pool of personal savings and and a huge amount of determination. Still privately-owned and self-financed to this day, Grizzly remains true to its humble roots. Their motto, “Our Own Path to Craft,” is a perfect description of the Grizzly startup story.

“In an industry filled with highly-capitalized products from large companies with investors, loans and personal wealth behind them, it’s hard to keep up with the Joneses. Corey and I got started with nothing but a dusty garage and some wild nights of fermentation. We both worked full-time day jobs for the first year and brewed hard on the weekends.”

The Grizzly duo began selling pilot batches in the fall of 2013. At that point, they decided to spend a year test-marketing their ciders in draft-only format throughout the Seattle area.   In the fall of 2014, after a successful test campaign and outgrowing their facility, Grizzly moved production from it’s Seattle headquarters to the Walla Walla Valley of Southeastern Washington/Northeastern Oregon to be closer to its orchard sources and various partners. 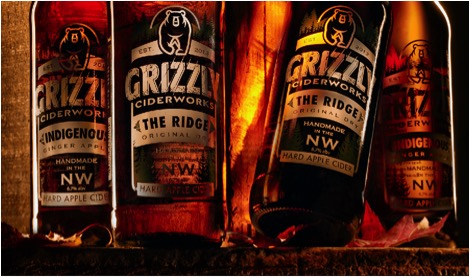 “Strong partnerships in sourcing, production and distribution are paramount to our small business. We’ve teamed with multiple growers and other cider companies to share resources. We’ve also partnered with the best distributors and retailers around the region, which has allowed us to compete with companies much larger than ours. We’re very humbled by the opportunity to sit on the shelf next to some outstanding companies which we look up to.”

Grizzly’s development has remained relatively quiet publicly while they’ve searched for their place in the industry. Now rapidly growing throughout the Northwest and beyond, it will be exciting to see what 2016 has in store for Grizzly.

“We’re still getting the hang of everything when it comes to scaling up and growing outward. Taking our recipes from 300 gallon batches to 2,000 gallons or more at a time has taken a lot of work to maintain style and strength. As with any startup company, there have been a few bumps in the road, but as we continue to experiment and develop, the ciders are starting to really shine. Now that we sell in bottles as well as kegs, we have changed some of the recipes to be filtered, pasteurized and a little more crowd-friendly. Though we maintain dry styling based on spices and hops, a cider company that makes only heavy hopped varieties would be like a brewery that only made Imperial IPAs. The people who like them LOVE them, but we want Grizzly to be enjoyed by a larger audience who appreciate dry, local craft ciders.”

Grizzly is currently sold in bottle and keg formats throughout the Northwest and a few states to the east. With more growth already planned for next year, this little cider company from Seattle is sure to surprise. Patience, organic growth and creative sales strategies have allowed a company with one full-time employee to compete with the Goliaths of the exploding cider industry. Keep an eye out for exciting news and updates from Grizzly Ciderworks in the months and years to come.