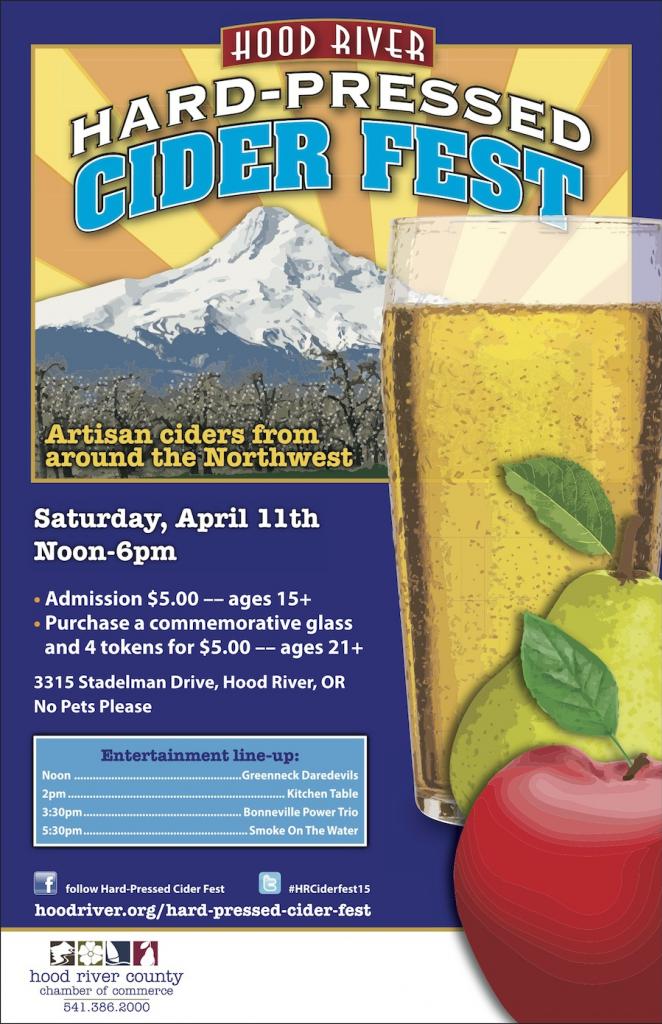 Hood River, Ore. – Hood River Hard-Pressed Cider Fest has announced its 2015 lineup, which brings together 19 local and regional craft cideries, with more than 38 ciders on tap. Eight of the cideries are located in the Hood River area – an indication of how the Columbia Gorge region is at the epicenter of the Pacific Northwest’s booming cider scene.

“As one of Oregon’s biggest hard cider events of the year, the Hood River Hard-Pressed Cider Fest is like a one-day course on the Pacific Northwest craft cider scene. It’s a great way to see what styles the cideries are working on and to try new favorite varieties – from hops-based ciders to French Champagne-style ones,” said John Melesko, owner of Doug’s and 2015 chair of the Hood River County Chamber of Commerce. “Plus, with all of Hood River Valley’s fruit orchards awash in blossoms, April is the perfect time for visitors to come out and see where so many these ciders get their start.”

“The incredible variety of apples available in the Gorge, and close relationships between orchard families and cideries, means that the cider crafted in our region showcases local fruit to its fullest while allowing the individual cidery’s approach to shine.  The Hood River Hard-Pressed Cider Fest is the perfect place to see where these worlds come together in the heart of the Hood River Valley,” said Carrie Pipinich, Coordinator for the Columbia Gorge Cidermasters.

To accompany the ciders, festival-goers can dig into offerings from the area’s vibrant food scene, including Apple Valley BBQ, Four & Twenty Blackbirds and Solstice Wood Fire Café. The daylong even also features local arts vendors, a kid’s area and a lineup of local music, from bluegrass to classic rock – guaranteeing a great time for the whole family.