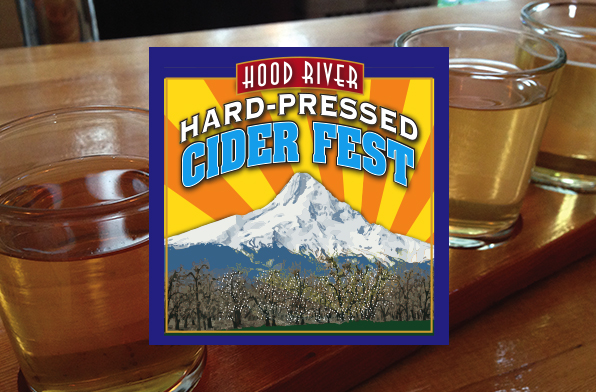 Hood River, Ore. – March 7, 2015 – Hood River Hard-Pressed Cider Fest has announced its 2016 lineup of 20 local and regional craft cideries. Of the 20 cideries, six are new to the festival, including two newly launched Hood River cideries, Spoke & Sail Cider Co. and Crush Cider Cafe. Together, they will be sampling more than 40 original ciders that showcase the wide variety of styles coming out of the Pacific Northwest’s booming cider scene.

“Set in the scenic Hood River Valley among blossoming apple, pear and cherry orchards, Hood River Hard-Pressed Cider Fest gives people the chance to see and experience first-hand where so many of these ciders get their start,” said Mike Glover, CEO, Hood River County Chamber of Commerce. “We love bringing all of these unique cideries together under one roof and giving people a taste of the tremendouse depth and scope of ciders being crafted in the area. It’s a great way to see what styles the cideries are working on and to discover new favorite brands and tastes – from hops-based ciders to French Champagne-style ones.”

To accompany the ciders, festival-goers can dig into offerings from the area’s vibrant food scene including Apple Valley BBQ, Leah’s Lunch, and Solstice Wood Fire Café. The daylong event also features a lineup of local music, from an old-time string band to honky-tonk country and rock, and a kids’ area, complete with a bouncy house – guaranteeing a great time for the whole family. Spring showers aren’t a problem, as the tasting takes place in a covered hall.

Hood River Hard-Pressed Cider Fest is the anchor event for Hood River Blossom Time, a month-long celebration of the beauty and agricultural heritage of the area. Check out a full calendar of Blossom Time events at HoodRiver.org.