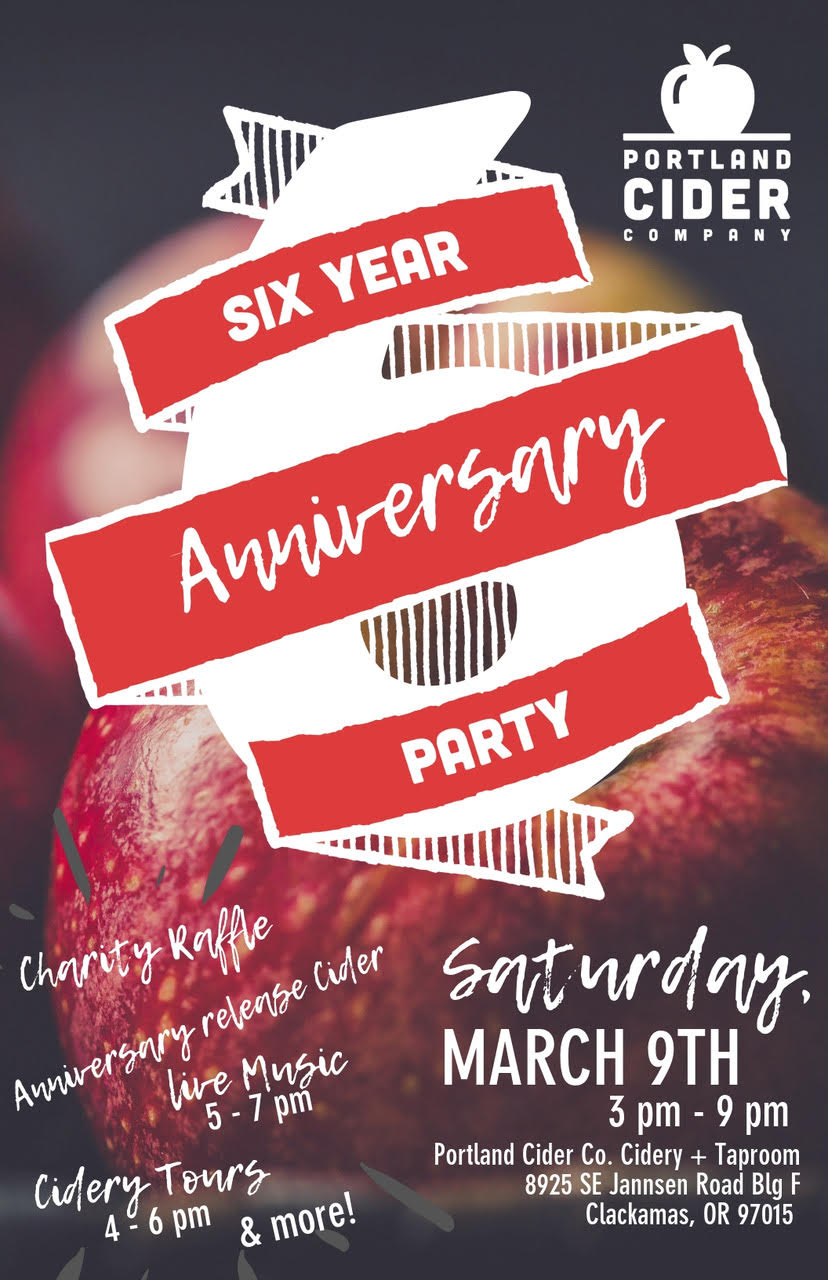 CLACKAMAS, Ore. – Feb. 7, 2019 – One of Oregon’s original cidermakers, Portland Cider Co. will celebrate six years in the industry this March, and the cider house is celebrating with an anniversary party featuring cider sampling, live music, tours, a photo booth, a charity raffle, and a special anniversary bottle release.

The event will take place on Saturday, March 9, from 3pm to 9pm at the Clackamas Pub & Cidery, located at 8925 SE Jannsen Rd, Bldg. F. The event is open to the public and all ages are welcome. Admission is free; in order to sample the more than two dozen ciders on tap, patrons can purchase a package with a commemorative anniversary glass and 12 drink tickets for $20. Cider cost four drink tickets per pint, or $6 per pint without the commemorative glass. Advance tickets may be purchased HERE (Merctickets.com) or at the door; advanced tickets include an extra two drink tickets.

“Six years ago, Portland Cider was simply two cider enthusiasts’ hopes and dreams to create great cider for all to enjoy,” stated Jeff Parrish, co-owner of Portland Cider Co. “We are so thankful that so many people share our enthusiasm and enjoy our cider.“

Added co-owner Lynda Parrish, “Seeing the passion for our flagship ciders Kinda Dry and Sorta Sweet six years later blows us away every day. We’re incredibly excited for the new, innovative things we have planned in 2019.”

The anniversary party will feature a special Six-Year Anniversary Cider bottle release of a traditional English Scrumpy, featuring a blend of Northwest grown heirloom cider and culinary apples aged for over a year. This cider commemorates the heritage of cider making that Portland Cider takes pride in every day. The wax-dipped sealed bottle features artwork by local artist Stefan Way. Only 240 bottles will be available, with a limit of three per customer.

A special tappings bar will feature Portland Cider rarities pulled from the keg cellar, as well as a preview of a brand new seasonal release: Pineapple Rosé. Hitting stores in six-pack cans in April, Pineapple Rosé is naturally pink from a splash of northwest grown blueberry juice, and bursting with fresh pineapple juice.

The event will offer live music from Dead Lee, a folk duo comprised of Brian Koch (current and founding member of Blitzen Trapper) and singer-songwriter Kara Harris, from 5pm to 8pm. The duo represents a mutual love of the darker folk and country traditions.

There will also be on-site screen printing of a commemorative anniversary T-shirt from 3pm to 6pm; cidery tours from 4pm to 6pm with Portland Cider Co. cider makers; a photo booth; and a raffle benefiting Providence Cancer Institute.