After accepting a haul of over 1,000 bushels of apples and other backyard fruit, Portland Cider Co. has released its 2020 version of its PDX Community Cider in 19.2 ounce cans.

This past summer, Portland Cider Co. requested its Portland area customers to donate their fallen and unwanted backyard fruit for its 5th annual PDX Community Cider program. From the more than 1,00 bushels––which equates to 40,000 pounds––of apples, fruits and berries, a 150% increase from 2019’s donations were received this year. This will result in a greater opportunity to raise additional money for Hunger-Free Schools where the non-profit will receive 10% of sales with a goal raising $12,000 in 2020!

The resulting 2020 PDX Community Cider is a beautiful blend of fruit from Portland backyards that is slightly wild, tart, and juicy with rich stone fruit. Every can features apples, pears, plums, cherries, and other donated fruits from the Portland community.

For the first time in the program’s five-year history, Portland Cider has packaged its PDX Community Cider, which is available now in 12-ounce six packs and 19.2-ounce “proper pint” single cans at Portland Cider Co.’s two taprooms and will roll out on store shelves in Oregon and Southwest Washington throughout October.

“This cider has only been sold in draft in the past. By also packaging the cider in cans, we are able to reach even more customers, which means raising more funds to ensure students of all ages and levels in Oregon have enough to eat,” said Jeff Parrish, Portland Cider Co. co-owner. 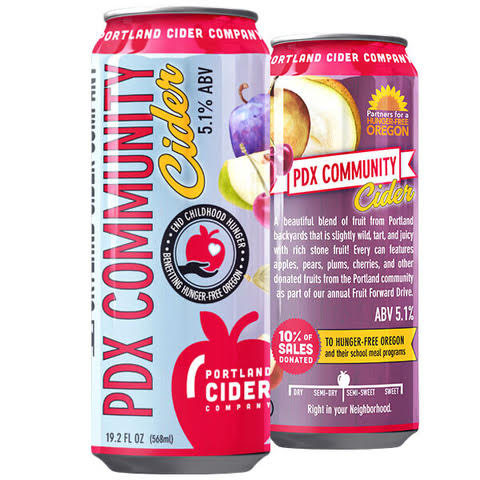 Portland Cider has pledged 10% of sales for all PDX Community Cider sold––in both package formats and draft in the pubs––to Hunger-Free Schools, a segment of Partners for a Hunger-Free Oregon that provides support and grant funding to schools across Oregon, working to end childhood hunger. This is especially important during a time when many school districts are turning to Hunger-Free Schools for emergency grant funding. Partners for a Hunger-Free Oregon is a 501(c)3 non-profit committed to actively working to end hunger by connecting people to food and nutrition programs, raising awareness about hunger, and advocating for systemic changes. Additionally, Portland Cider Co. will donate $2 from every case sold of any and all Portland Cider Co. six-packs sold in October. The company estimates it will donate more than the $11,500 raised last year.

“Oregon communities are strong and resilient. While the COVID-19 crisis has doubled the number of people experiencing hunger in our state, we are grateful to all of our neighbors and businesses like Portland Cider Company that are stepping up to help families keep food on the table during this crisis,” said Annie Kirschner, Executive Director of Hunger-Free Oregon.

Learn more about the PDX Community Cider program at PortlandCider.com/HungerFreeKids.