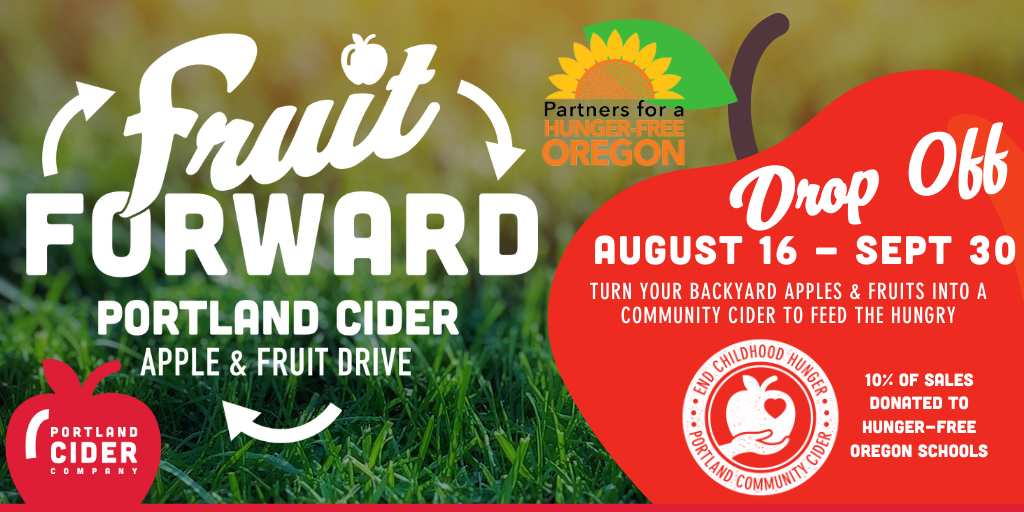 Portland Cider Co. is collecting bushels (40 lbs or more) of unwanted and fallen fruit from August 16 through September 30, with no-contact fruit drop-off at its Clackamas Taproom at 8925 SE Jannsen Rd, Bldg. F. Drop-off hours are Monday through Friday from 9 a.m. to 3 p.m. or weekends by appointment. For every bushel of edible quality apples or pears – and/or for every 10 lbs. of berries, plums and other fruits – donors will receive a voucher for a pint of the finished “PDX Community Cider” once released this fall, redeemable at either of Portland Cider Co.’s two taprooms while supplies last.

“The more apples and fruits donated, the more cider we can make –– which results in more money going towards feeding kids here in Oregon,” said Lynda Parrish, Portland Cider Co. co-owner. “This project requires the entire community to work together, but it’s a triple win: it reduces food waste, helps feed children, and, of course, makes delicious cider!”

Portland Cider will package the PDX Community Cider and make it available in 19.2-ounce “proper pint” single cans and on draft, with a very limited number of 12-ounce six pack cans produced. The cider will be released in late September to retailers throughout Oregon and Southwest Washington.

Portland Cider will donate 10% of the cider’s sales to Hunger-Free Schools, a segment of Partners for a Hunger-Free Oregon that is committed to actively working to end hunger by connecting people to food and nutrition programs, raising awareness about hunger, and advocating for systemic changes. According to the Oregon Hunger Task Force, food insecurity in Oregon has more than doubled since 2019, affecting one in four Oregonians.

“We’re optimistic that the community will come together to help us beat last year’s goal and result in an even larger donation for Hunger-Free Schools,” said Jeff Parrish, Portland Cider Co. co-owner. “Last year, this project raised $12,500, thanks to a record amount of fruit donations equaling more than 40,000 pounds. We want to set a new record and help as many kids as we can, when they need it more than ever.”

Portland Cider Co. asks that all donated fruit is of edible quality; the company will not accept rotten or moldy fruit. Ugly fruit, however, is welcome, including apples or pears with cracks, scarring, indentations, dimples, scabs, holes or brown spots. Use of disposable boxes or containers is highly recommended. Learn more at PortlandCider.com/drive and follow Portland Cider on social media at @PortlandCider.