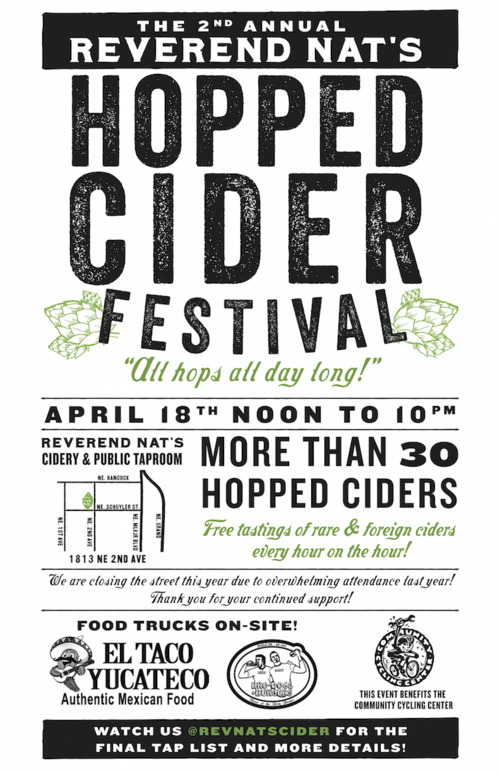 Now back for its 2nd year and bigger than ever, Reverend Nat’s Hard Cider will be hosting its 2nd Annual Hopped Cider Fest. Held at its Cidery & Public Taproom in northeast Portland, the second annual event will take place Saturday, April 18 from Noon to 10:00pm. This also happens to be the day after the completion of the 2015 Craft Brewers Conference in Portland.

This is the second Hopped Cider Fest put on by Reverend Nat’s Hard Cider, having launched the concept last year very nearly on a whim. Public response was said to be overwhelming last year with nearly 800 attendees crammed into the cidery for eight solid hours. This year’s event will include a street closure and even more ciders including hopped ciders produced around the world.

Many cidermakers will be on hand to inform attendees through the samplings, which will be available in 4-ounce tasting portions in a souvenir festival glass. In addition to the superb range of ciders, the event will feature food from El Taco Yucateca and the returning favorites Bro-Dogs + Burgers. And in a repeat of last year’s festivities, every hour on the hour attendees will be treated to free tastes of ciders unavailable for purchase in Oregon including ciders from all over the USA and overseas.

“This is surely the largest collection of hopped ciders in the history of the universe,” says Reverend Nat West. “Last year we organized the event in a couple weeks and were blown away by the public response. We learned our lessons and decided to expand into the street but we are doubling-down by adding even more hopped ciders and upping the tasting pour size.”

…with many more to come!