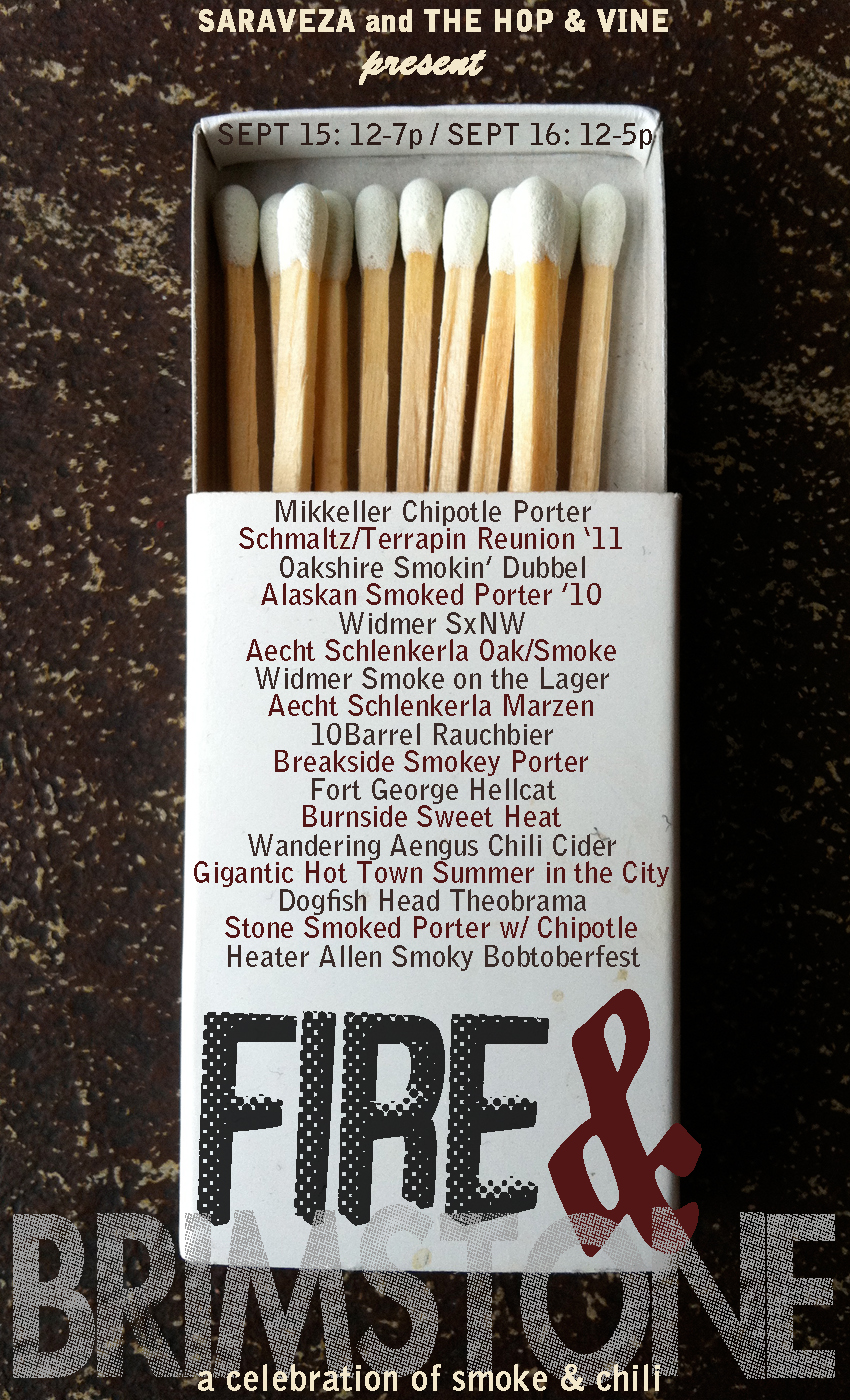 Two of North Portland’s favorite craft beer venues, just blocks away from one another, celebrate two days (September 15 and 16, 2012) of some to the best, if not most interesting smoke and chili beers. Fire & Brimstone was a huge hit last September at The Hop & Vine and now returns as an annual tastival the includes Saraveza Bottle Shop & Pasty Tavern, just across the I-5 overpass on North Killingsworth Street. Paired up with an assortment of food pairings, Fire & Brimstone is a dream come true for those who seek out the likes of smoked porters, rauchbiers, chili beers, and a wide range of craft beers that are smoky, chili, or a combination of the two.

Here’s the full rundown of beers, food items, pricing, and other specific details of Fire & Brimstone from the organizers:

Fire & Brimstone, an annual celebration of chili and smoke beers, is returning to Portland for a second go, this time in two locations. North Portland’s The Hop & Vine will be joined by street-mate Saraveza in presenting the event the weekend of September 15th and 16th. Tasting sessions will be Saturday 12-7pm and Sunday 12-5pm.

Both locations will offer special food pairings, the lion’s share of which will take place at Saraveza. Their “Smokin’ Bamberg Onion” plate will be a $20 all-encompassing meal, complete with a peach-chili dessert and tasters of all five smoke/chili beers they’ll be pouring. The Hop & Vine’s pairing will bring the magic of the chili to the plate via offerings of a coconut & garden chile-steamed plate of clams, prawns and scallops as well as a pair of harissa-rubbed lamb ribs and a smoked chile ice cream.

Local favorites like Burnside’s Sweet Heat and Breakside’s Smokey Porter will join offerings from national stars like Dogfish Head and Stone, who will be, in turn, be joining international heavy hitters like Mikkeller and the aforementioned Schlenkerla. Between them, the two bars will be serving 17+ unique and diverse chili and smoke (and, in some cases, both) brews from all over the globe!

Pedicab transport will be provided by PDX Pedicab to participants between the locations, but if participants choose to walk, they can easily follow the chiles on “the smoke trail”, a path of smokin’ chile peppers painted along the Killingsworth sidewalk to guide the way.

At both locations, $20 will get you 10 tasting tokens (all 5oz pours will cost 1 token). A Fire & Brimstone tulip glass can also be purchased by participants for $4 (or two tokens) while supplies last. Additional tokens may be purchased for $2 each.

Both venues will also be open for regular business.

The Hop & Vine, which recently celebrated its 4th Anniversary, is a bar & bottle shop servicing North Portland & beyond, offer a depth & breadth of libations & edibles both local and global. They are located at 1914 N Killingsworth St.

Saraveza is a Bottleshop & Pasty Tavern in North Portland and is recognized as one of the premier beer destinations in the country. They are located at 1004 N Killingsworth St.