Last evening the 6th annual Aquavit Week began in earnest at Broder Nord in North Portland. This year’s event will take place through Sunday, December 10, 2017 across the United States with set events in Portland, Minneapolis, Chicago and Washington D.C.

When Jacob Grier founded Aquavit Week in 2012 there were only a few aquavits available in the United States. Now five years later there are more than 50 available from the well-known distillers of Northern Europe to new American craft distillers. This growth has been made possible with generous sponsorship from Linie, a Norwegian aquavit that undergoes one of the world’s most unique ageing processes all done at sea, and Aalborg, the classic aquavit brand of Denmark.

After attending the Aquavit Week Kick Off Party last evening at Broder Nord a reaffirmed appreciation of this Scandinavian drink was confirmed. With a reception of Scandinavian fare, an aquavit cocktail and Aalborg Aquavit toast, the $30 entry was well worth it. Plus there were dozens of other aquavit’s being served. One that stood out was the Brennivin 80th Anniversary. This rare Icelandic aquavit was aged in Islay Scotch, American bourbon, and new American oak barrels and the only state in the U.S. to receive it was Oregon. The 750mL bottles are available at a select few Oregon liquor stores.

Here in Portland, Aquavit Week continues on with the annual Snaps & Taps. Bazi Bierbrasserie, Imperial, La Moule, Loyal Legion, Raven & Rose, and Wayfinder Beer will all be pouring locally brewed beers brewed just for the week that are paired with various aquavits. Last night we had a sneak peek of New Nordic Porter from Breakside Brewery. A robust porter, this one incorporates what aquavit is known for, caraway seed along with the addition of birch bark. At 6.7% ABV the addition of the caraway seed and birch bark reduces the roastiness that is expected with a porter and brings out elements that are very unique and satisfying.

Beyond Portland area events Aquavit Week will be hosting events in Chicago, Minneapolis and Washington D.C. along with various aquavits being poured at bars throughout the United States. A list of all of the events can be found HERE. 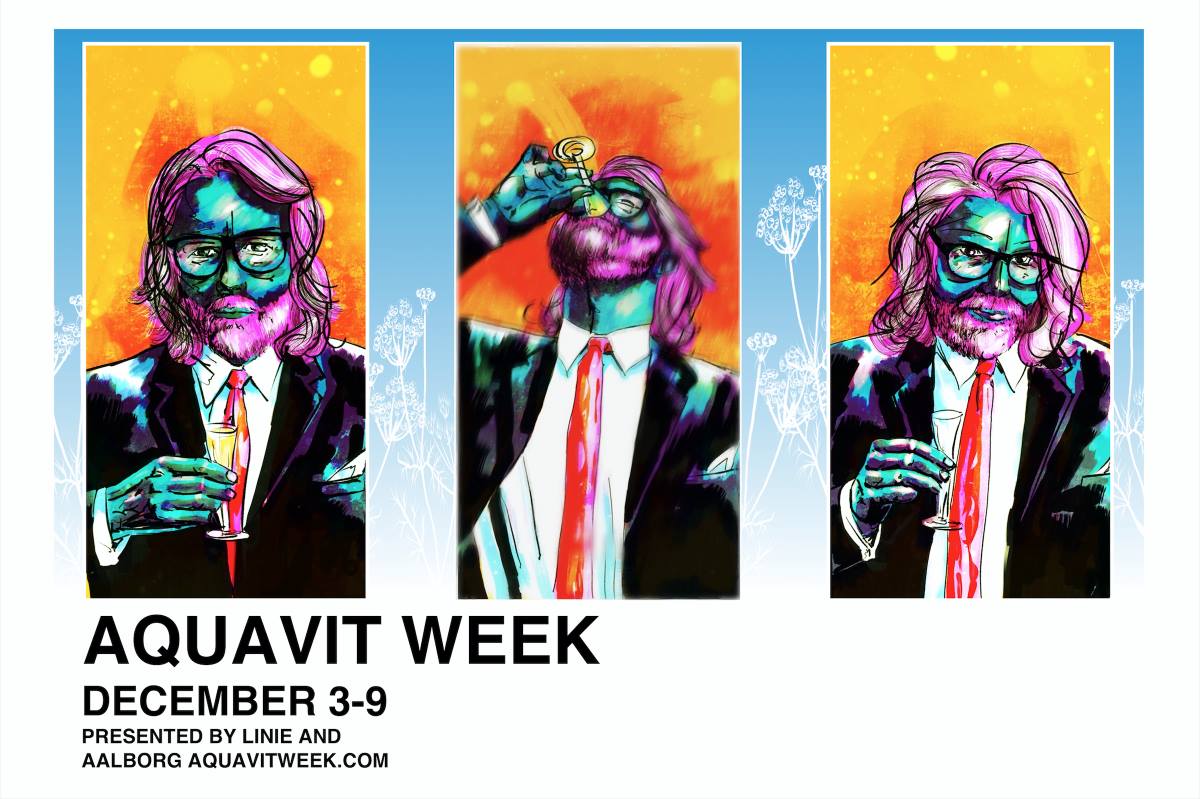 Here’s a rundown of all of the sanctioned events provided to us by the organizers of Aquavit Week.

Snaps & Taps (Portland, Dec. 3-9)
Bazi Bierbrasserie, Imperial, La Moule, Loyal Legion, Raven & Rose, and Wayfinder Beer
Snaps & Taps celebrates the potential of aquavit to pair with beer and cider, featuring unique pairings all over the city of Portland. These special brews will be featured at the restaurants and bars below, each paired with a different aquavit. Plan a crawl around Portland to catch these before the kegs run dry!

Meet Your Maker (Portland, Dec. 5)
Multnomah Whiskey Library – 1124 SW Alder St, Portland, OR
In this installment of the Multnomah Whiskey Library’s Meet Your Maker series, the Library is honored to welcome Lars Kragelund of Arcus, the world’s largest producer of aquavit. Lars has garnered his expertise as a blender and distiller with Arcus, helping to produce their widely known Aalborg and Linie lines of aquavit. Lars will be here to share his expertise as well as discuss the traditions of Norwegian and Danish aquavits. Along with the delicious spirits, light bites will be provided by Chef Ben Grossman and the kitchen. Tickets will be released on November 7th and space is extremely limited. Please visit www.mwlpdx.com for tickets and further information.

Aquavit Distillers’ Happy Hour (Minneapolis, Dec. 6)
Eat Street Social – 18 W 26th St, Minneapolis, MN
Minneapolis is one of America’s best cities for aquavit. Come meet the producers behind local brands of aquavit as those from Norway and Denmark. Eat Street Social will offer a special cocktail menu for the evening featuring aquavit cocktails from all the producers. 7:30 pm to 10:00 pm.

Nordic Cocktail Night (Chicago, Dec. 7)
Sportsman’s Club – 948 N Western Ave, Chicago, IL
Aquavit Week returns to Sportsman’s Club to take over the cocktail menu for one night only in Chicago. Four different local and international aquavits will feature in four different cocktails from the Sportsman’s Club bartenders, and all four spirits will be available to sip neat as well. 5:00 pm to 2:00 am.

Literary Cocktails (Washington, DC, Dec. 7 and 8)
Reading Room – 829 Upshur St NW, Washington, DC
Bartender Chantal Tseng continues her weekly series of literary cocktails with a menu inspired by the works of Danish author Hans Christian Andersen. Join her in the Reading Room at Petworth Citizen for this aquavit-centric menu of creative cocktails. 7:00 pm to 12:00 am.

Aquavit Week Post-Party (Dec. 10)
Expatriate – 5424 NE 30th Ave, Portland, OR
Toast the ending of the biggest Aquavit Week ever at the internationally inspired Expatriate, featuring aquavit cocktails from some of Portland’s most creative bartenders. 9:00 pm – 12:00 am.

The charity partner of the 2017 Aquavit Week will be the Immigrant and Refugee Community Organization in Portland. IRCO focuses on building new beginnings for immigrants and refugees in Oregon. Wither over 150 programs, IRCO provides culturally specific services from childhood development to senior services in order to help people achieve self-sufficiency and to build a multi-cultural community.