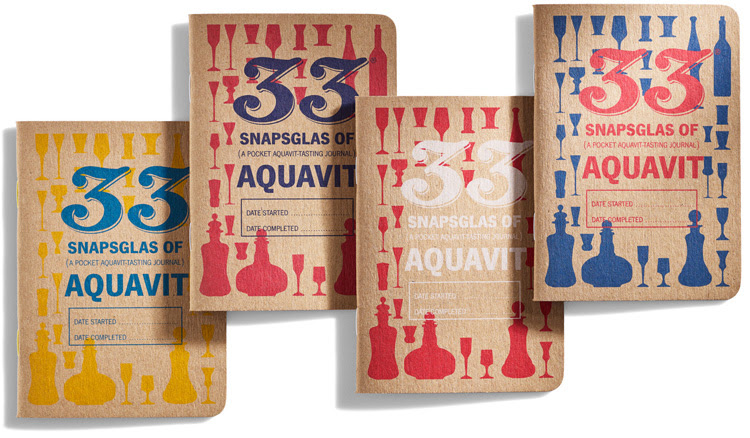 The latest tasting journal from 33 Books explores Aquavit, the famous drink from Scandinavia that features caraway and other spices. 33 Aquavits makes its debut today at KEX Portland for its 33 Aquavits Launch Party.

“Even in the Scandinavian countries, aquavit is usually seen as something for older people, consumed at holidays with your family,” says Grier, whose enthusiasm for the spirit led him to found Aquavit Week in Portland in 2012.  “But in America, bartenders and cocktail nerds are discovering that aquavit is something really unique, and its popularity here in the States is spurring new interest even in its ancestral home.” Grier’s Aquavit Week event has grown to include events around the United States and is now in its tenth year.

For the uninitiated, aquavit is a caraway- and/or dill-infused spirit traditionally produced and consumed in the Scandinavian countries of Denmark, Iceland, Norway and Sweden, but interest in America has led to dozens of examples produced in the new world.

“My favorite thing about aquavit is that, like gin, it’s a very creative spirit,” says Selden, Grier’s collaborator on 33 Aquavits. “The distiller starts with a neutral base, and then builds a flavor profile from there, adding caraway, usually, and then whatever she can find that tastes good. In researching this book, I tasted aquavits made with dill, cumin, citron, and even rye bread!”

There are four variations of 33 Aquavits hitting the market. There’s a distinct special cover for each nation, just like each nation prefers their aquavit a bit different. 33 Aquavits is available in four distinct cover colorways. The inside pages are the same in each, but the outside covers are inspired by the flags of the four Aquavit-producing (and -consuming) nations: Denmark, Iceland, Norway, and Sweden. Choose one, or save a couple bucks with a 4-nation variety pack that can be purchased by clicking here.

Just like the other tasting journals from 33 Books, taking notes with 33 Aquavits is as simple as checking a few boxes and entering a few basic facts. The flavor wheel in 33 Aquavits can be used to quickly recall a spirit’s unique flavor long after consumption. For low values of the flavor, fill in dots near the wheel’s center. It’s perfect the gift for aquavit aficionados, geeks, nerds and other fans of the rectifier’s art.

Plus, each book of 33 Aquavits includes a secret ingredient, a teeny amount of real aquavit is added to the ink in each edition, which is cryptically noted on the back.

Later today, on Thursday, September 23rd from 5:30-7:00pm, KEX Portland will host the 33 Aquavits Launch Party. Join 33 Aquavits co-author Jacob Grier and Dave Selden for an evening of Scandinavian drink and food. Guests will receive their very own copy of 33 Aquavits to mark down the aquavits consumed during the evening. KEX is known for its vast selection of aquavit and cocktails featuring this unique drink that can all be paired with excellent Scandinavian-inspired food. Plus, an exclusive Brennevin flight put together by the charismatic US importer. It’s a big room, so distancing should be no problem.