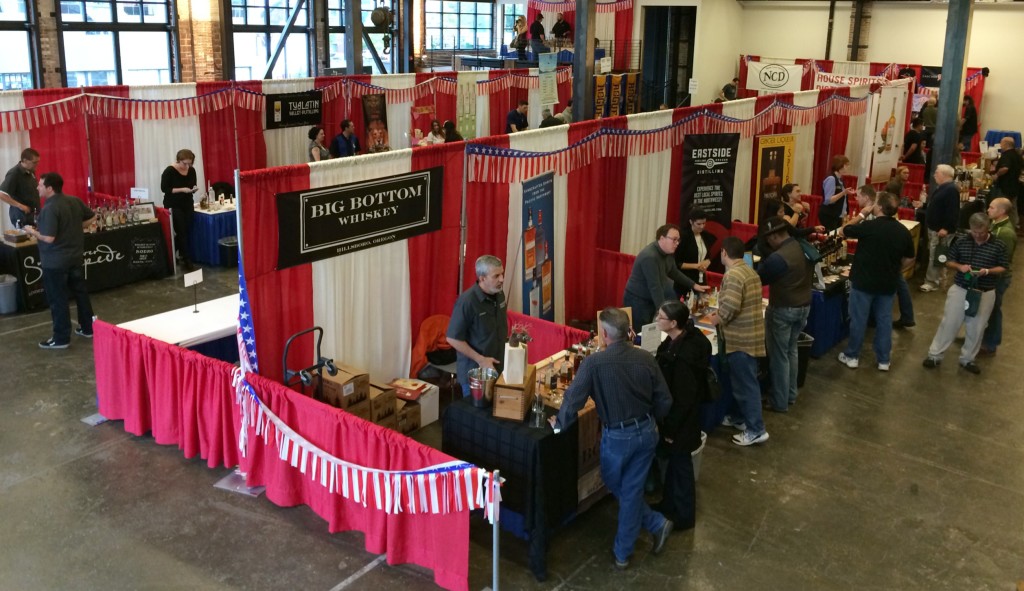 The Great American Distillers Festival (GADF) celebrated their 10th anniversary in Portland, October 24th – 25th, 2014. They describe the festival as a “rare, unique opportunity to experience the innovations of our thriving craft spirits community, while rediscovering some of America’s legendary distillers and blenders.” Sent on behalf Brewpublic, I was especially curious to see how beer and spirits come together in the name of imbibing.

It did not take long to find some beer influenced spirits. The first booth I sampled from, was that of Cascade Alchemy from Bend, Oregon. They make a variety of vodkas, but what caught my eye, was the Barley Shine. Barley Shine uses the wort from RiverBend Brewing Company’s IPA, ferments, and then distills on their Pot and Thumper still. The spirit was easy drinking and tasted like vodka, with a finish of malted barley. It sounds as though future batches may vary in terms of local brewery collaborations. Unfortunately, due to the small batches, you’ll have to visit the distillery in Bend to purchase a bottle.

The next beer infused spirit I happened upon, was from 3 Howls out of Seattle, Washington. As a whiskey enthusiast, I was excited to try their hopped whiskey. They use Amarillo, Horizon, Chinook, and Simcoe hops to infuse their whiskey. I expected that hop forward taste you might expect from your favorite IPA, but the hops were surprisingly subtle. The nose was citrusy, as one would expect, but the taste was complex and changed throughout with hints of pine and spices.  I was impressed with this whiskey, once I got past my expectation of a more hop forward flavor. Fortunately, this spirit can be found at Hollywood Liquor Store for $34. 3 Howls also makes rum, gin, and a variety of vodkas.

Even though I’ve never really fancied myself a limoncello fan, I was persuaded to try Crescendo limoncello from Eugene, Oregon. Even better, they offer a limecello and an arancello (orange), which personally I preferred. Crescendo prides themselves on using only certified organic ingredients which are free of GMO’s. How does this relate to beer, you ask? Take your shandy to the next level by adding a shot of any of their “cellos” to your favorite craft lager, hefeweizen, or Belgian beer next summer.

Leaving the festival, I was excited to run into the Lyle Style booth. If you’ve ever been lucky enough to drink Double Mountain’s Lyle Rider red beer, it is made with Lyle Style’s Bloody Mary mix. This spicy mix is a must have for any home bar for easy Bloody Mary or red beer making at home!

I look forward to attending GADF next year, to see the creativity in spirits continue to evolve.