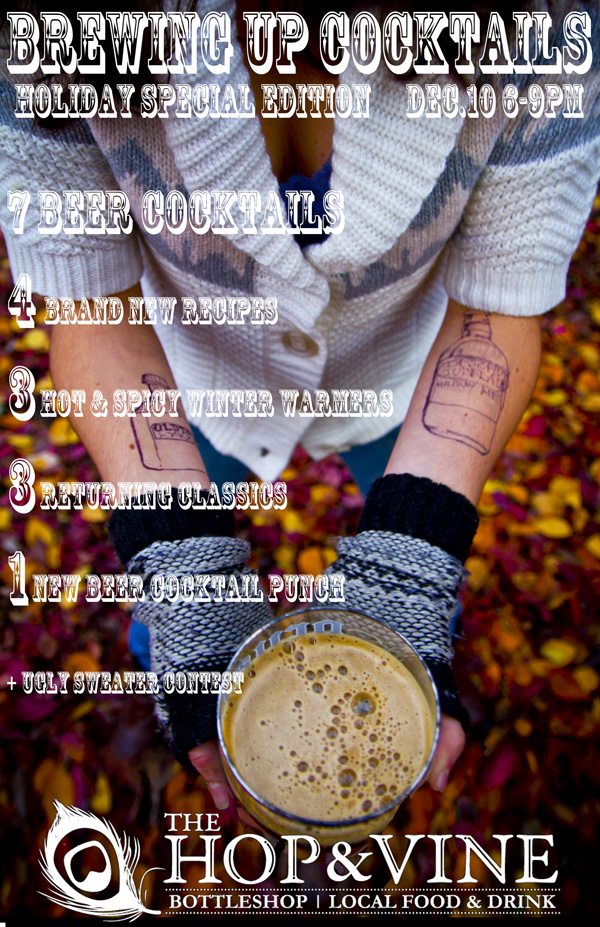 This holiday season welcome back Brewing up Cocktails for a special winter warmer/holiday themed evening of Beer Cocktails at The Hop & Vine. Last winter’s edition was perhaps the most popular installment of Brewing Up Cocktails ever, featuring acclaimed drinks like the Hot Scotchy, Wassail, and the Furburger, all three of which will make their return on December 10th. There will also be four brand new beer cocktails to set your head right and warm the cockles of your heart as the holidays near.
The new beer cocktails run the gamut of styles:  Three varieties will be served hot to fend off the winter cold, an effervescent and citrusy take on the French 75, a fruity and hoppy punch made with IPA, and a silky smooth beer flip. There will be something for everyone at this event, even an ugly Christmas sweater contest! Drink list…

Hot Drinks Wassail
Returning from last year’s hit Brewing up Cocktails is the hot mulled classic Wassail made with a base of Deschutes Jubelale slowly heated in a crockpot with brandy, sherry, cinnamon sticks, cloves, and orange. Served warm in a mug with a lemon slice.

Beervana described  the Hot Scotchy as “The Greatest Beverage in the World.” Perhaps the most popular beer cocktail to date, made with hot unfermented beer and Scotch. It may be the perfect winter brewers beverage.


A new creation served steaming hot, it is one boozy treat. Starting with a base of dark rum, a little Galliano Ristretto is added and then topped off with steamed 9% abv Choklat Imperial Stout and a float of whipped cream. Served with or without a dash of chili powder.

Trade Winds Punch: Rum, gin, vanilla Beans, grapefruit zest, ripe guavas, Chinese five spice powder, and a stalk of lemongrass are infused over night and then built into a tasty beer punch the next day with fresh lime juice, citrusy IPA, and sugar. This is our recreation of punch originated by Washington, DC bartender Jon Harris. You have never had anything like it, we promise you.

The lightest and most refreshing of the bunch, the Euclidean 75 is made with gin, lemon, and sugar,  then topped off with an effervescent and refreshingly tart Berliner-Weisse. A creation from Denver bartender and beer cocktail afficionado Ryan Conklin of Euclid Hall. FurburgerThe lovingly named Furburger returns from the very first Brewing up Cocktails. Black and thick as night with chocolate and roasty creaminess from Great Divide’s Oak Aged Yeti Imperial Stout, balanced with herbal Chartreuse and bourbon.

This creamy dessert of a beer cocktail has an incredible melange of flavors, from the anise-tinged aquavit to cream sherry, rhubarb and chocolate bitters, one whole egg, and Stone Brewing’s Smoked Porter.