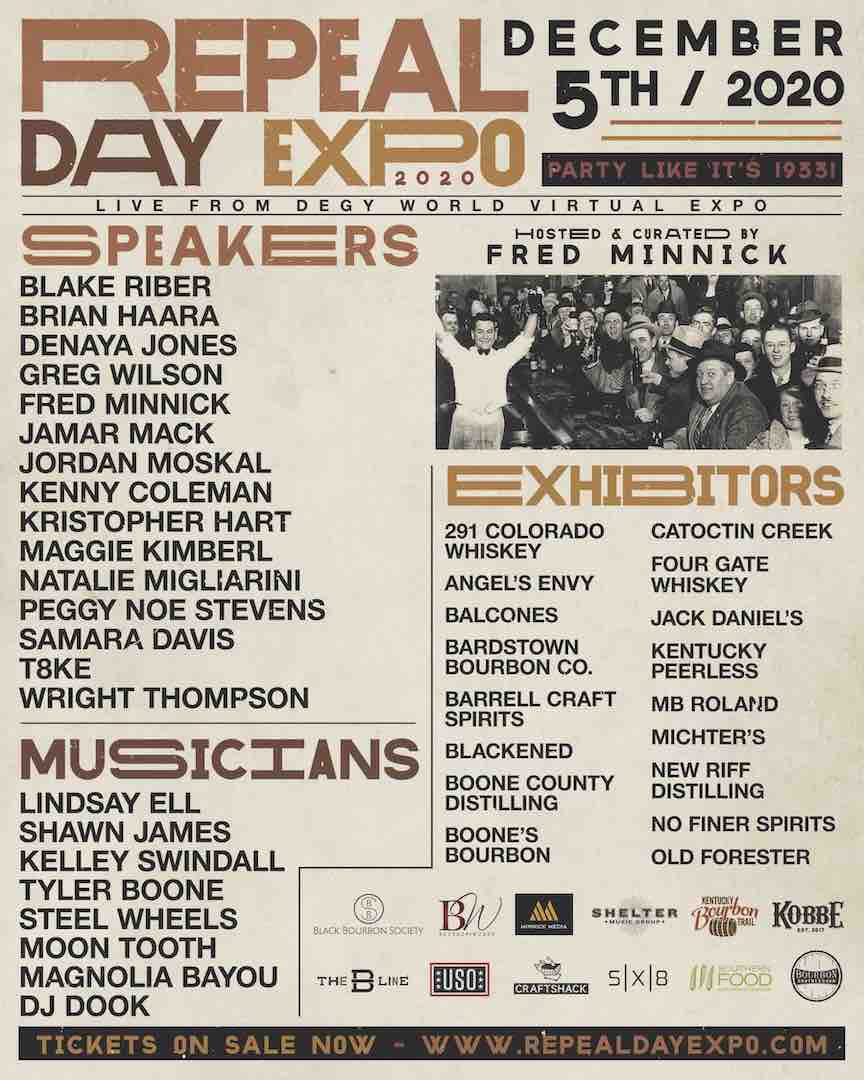 As we approach the 87th anniversary of National Repeal Day this coming Saturday, celebrate the repeal of prohibition with Repeal Day Expo 2020. This virtual event allows attendees to create their own avatar to explore the daylong expo that features over 40 liquor brands, live music, and well-known drinks personalities.

Repeal Day Expo 2020 came to fruition from Fred Minnick, the celebrated bourbon and whiskey expert, and Wall Street Journal bestselling author as he is the one that is funding the event. Attendees will the opportunity to engage in live conversations, expert panel discussions, private bourbon, mezcal, tequila, gin, beer and other tastings, and see musical performances on stage. Attendees can actually interact as a community.

“Think Sims simulation video games except that the players meet-up at their favorite liquor store inside a virtual world,” said Minnick, in a statement.

Here are additional details on Repeal Day Expo 2020 from the event organizers.

Master Taster Stevens’ seminar surrounds the concept of bourbon entertaining and she’ll share some of her trade secrets of hosting bourbon events in your home. “In our virtual world today this is such a unique way to celebrate bourbon and Repeal Day,” she said.

Given the limited number being offered, tickets are expected to sell quickly since going up for sale last week. The Expo’s most expensive tickets, at $149, sold out in two days.

Every ticket holder will build their own avatar and receive a bottle of Jack Daniel’s through the event’s online retailer, CraftShack, in states allowing alcohol shipments. All ticket holders, participants and registrants must be at least 21 years old.

“Repeal Day Expo doesn’t replace the in-person bar experience, but it’s as close as we’ll get in 2020. Throughout my career, I’ve tried to give beverage fans interesting experiences and content,” says Minnick, winner of the 2019 John Barleycorn Spirits Personality of the Year. “There’s simply nothing like Repeal Day Expo in Degy World. With your own avatar, you’re essentially playing a video game, yet engaging with people and drinking whiskey. It’s the gathering the spirits industry is yearning for during this celebrated holiday.”

Minnick is former editor of Bourbon+ Magazine, a longtime judge of the San Francisco World Spirits Competition, and co-founder of Bourbon and Beyond, the 3-day music festival.

Dec. 5, 1933 marks the day alcohol Prohibition was repealed in America. For this auspicious day, many gather to raise a glass toasting the end of Prohibition. Since gatherings are a thing of the past this year, the Expo quenches the spirits industry’s thirst for an annual Repeal Day party.

“We are thrilled to be teaming up with Fred Minnick, his amazing team, and his throngs of dedicated followers around the world. The event concept conceived for Degy World is exciting and groundbreaking for the spirits world. We know that the Repeal Day Expo ticket holders, exhibitors and presenters will have a unique, immersive avatar experience unlike any they ever imagined,” said Ari Nisman, founder of Degy World.

Ticket packages: All packages include 1 bottle of Jack Daniel’s. A portion of every ticket will be donated to the Museum of the American Cocktail and the USO.