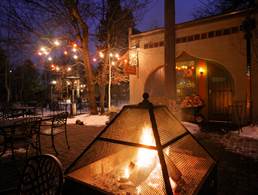 Drinking cold beer in the cold days of winter may seem counter-intuitive to some, but throw outdoor fire pits into the mix and you’ve got the 2nd Annual High Gravity Extravaganza. Last year’s first event proved that there’s no better place to celebrate than in the High Desert of Central Oregon at McMenamins Old St. Francis School. So, they’re doing it again!

In the spirit of Central Oregon and the uniqueness of the High Desert in January, step out and celebrate big, bold beers while basking in the crisp winter air at the High Gravity Extravaganza at McMenamins Old St. Francis School (OSF). This second annual “Go Big or Go Home” event brings together high gravity ales from some of Central Oregon’s top breweries (list below) and McMenamins around the Northwest with a backdrop of snow-covered mountains while huddling around blazing firepits. With live music by Mark Ransom & The Mostest and Down North,  you can also stop by the brewer’s corner to meet the makers, discuss technique or just share a couple pints with friends.