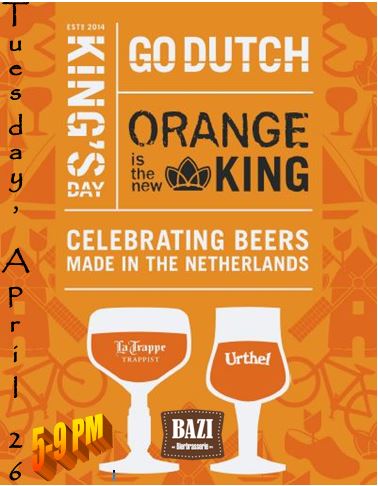 Each year at the end of April the Dutch celebrate their King. It’s a day of parties, orange clothing and—charmingly—yard sales! Bazi is encouraging patrons to wear ORANGE – the color of royalty – on Tuesday and come experience a special Dutch tasting tray from La Trappe along with a special visit from their Brewmaster. It’s not every day that a Dutch brewer makes an appearance in Portland.
La Trappe is one of only ten Trappist breweries in the world allowed to carry the logo “Authentic Trappist Product”. This logo guarantees authenticity, recipe, tradition and, in the case of La Trappe, a thriving working relationship between monastery and brewery. These world-class beers have been brewed at the Cistercian Abbey of Onze Lieve Vrouw van Koningshoeven since 1884.