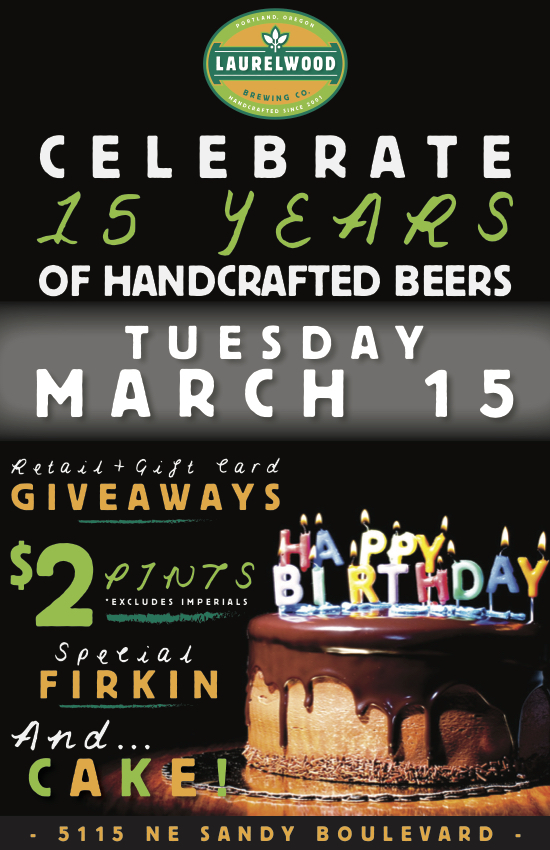 Over the past 15 years Laurelwood Brewing has been a prominent brewery here in Portland. What owner Mike DeKalb has accomplished during this time has been to recruit some of the best brewers in the industry. Through the years Laurelwood Brewing has seen Christian Ettinger, Chad Kennedy, and Vasilios Gletso lead its brewing operations. One and a half years ago when Gletso moved on to Hill Farmstead Brewery, Laurelwood promoted Shane Watterson to take over as Brewmaster. He too has gone on to provide great tasting beers while winning a Silver Medal at this past year’s Great American Beer Festival for the brewery’s hop forward Eazy-Duz-It IIPA.

Today, March 15, marks the 15th Anniversary Party for Laurelwood Brewing. To celebrate the brewery will be celebrating at its Northeast Portland flagship location all day long. To help in the festivities Laurelwood will be serving up $2.00 pints from open to close (excludes Imperial beers) and at 5:00pm a special firkin will be tapped. Shortly thereafter the firkin tapping Laurelwood’s anniversary cake will be served.

And if you’re feeling lucky, there will be giveaways throughout the day. Some of these prizes include a $50 gift card, a growler with fill, free t-shirts, and more!